E.O. 9066 forever changed the lives of the Nikkei community, as well as others with whom its history is forever connected. 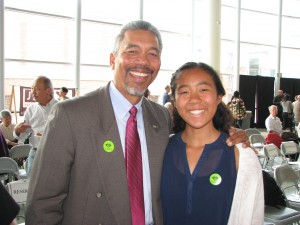 Nearly 200 attendees joined together on Feb. 23 for the Los Angeles-Day of Remembrance, a moment to uplift a part of history not shared enough, yet has so much relevance to struggles today.

Since September 2014, the LA-DOR organizing committee, which includes multigenerational members of the JACL-Pacific Southwest District, the Japanese American National Museum, Nikkei for Civil Rights and Redress and the Manzanar committee, had been meeting to plan this annual commemoration of E.O. 9066 and its impact on the community. The conversations were undeniably shaped by the tragic death of unarmed 18-year-old African-American teen Michael Brown on Aug. 9, 2014, only a month prior to the committee’s first meeting.

The use of fatal force by the unindicted officer, Darren Wilson, represents one of many modern-day legal murders of black lives, due to the state’s protection of deadly law enforcement. Public outrage made the end of 2014 a time of nationwide protests, and organizers now recognize 2015 as the Year of Resistance.

With Los Angeles community members demanding justice for the death of Ezell Ford, a young unarmed black male shot in the back by LAPD on Aug. 11, 2014, and Little Tokyo at the heart of peaceful protests with LAPD headquarters nearby, the LA-DOR organizers began to discuss what became the theme of this year’s program: “E.O. 9066 & the [In]Justice System Today.”

Call to Action speakers Mariko Rooks and Alex Kanegawa address the audience during the DOR presentation.

E.O. 9066 not only changed the lives of the Nikkei community but also that of others with whom our history is forever connected. This year’s theme was an effort to speak to the importance of remembering how wartime anti-Japanese racism and the U.S. Japanese incarceration camps led Nikkei and black community members to connect and build with each other in the face of oppression.

Emcees Helen Ota and Dr. Curtiss Takada Rooks began the program with the annual commemoration ceremony. They then led the audience through a historical presentation, highlighting stories of Nikkei and black leaders, working across difference with justice in mind.

The late African-American attorney Hugh Macbeth was one of those community leaders who acted upon his moral consciousness to defend Ernest and Toki Wakayama, who were forcibly removed from their California home following the announcement of E.O. 9066. He also worked with ACLU attorney A. L. Wirin to represent Fred and Kajiro Oyama in their challenge against the California Alien Land Act, which the Supreme Court ruled unconstitutional in January 1948.

African-American political leaders such as Congressman Ron Dellums and the late Congressman Mervyn Dymally were also honored for their impassioned efforts alongside Japanese Americans in the redress and reparations movement.

Late Japanese Americans like Yuri Kochiyama were recognized for their inspiring commitment to justice and black liberation while living and working amongst African-Americans. Nisei short story writer Hisaye Yamamoto DeSoto was another leading example through her experiences of writing for an African American newspaper, the Los Angeles Tribune. After her release from Poston, she compiled critical reports of lynchings across the country, and remarked once that the experience of working with the black community led her to feel that a “transformation did take place, the effects of which are with me still.”

After leaving the camps, African Americans and Nikkeis used to live amongst each other in neighborhoods such as East and South Los Angeles, where restrictive housing covenants had segregated communities of color. With the communities sharing space, black and Japanese American leaders worked to integrate their neighborhoods, where everyday moments for solidarity and transformation could take place.

But, how do these historical connections matter today?

With Japanese Americans no longer living in black neighborhoods as they once used did, what is the community’s connection to how the justice system in the U.S. continues to imperil the black community with police violence, profiling and mass incarceration?

To further this dialogue, a conversation took place between community members Povi-Tamu Bryant, Rey Fukuda and Mike Murase. Murase, a community activist raised in what is now South Central, challenged the audience to realize there are many days of remembrances. Going back to 1955, Murase recounted the names and years of many black individuals killed by the state, making the connection of how “racism, hysteria and the failure of political leadership” systemically continues to allow these injustices occur.

Fukuda, a transgender, mixed-race, Nikkei and Latino immigrant to the U.S., shared that regardless where he traveled to in the world, he witnessed anti-blackness and the stigma against black people. Sharing personal experiences of how his parents took issue with him dating his former black partner, Fukuda not only showed how anti-blackness is commonly perpetuated within non-black communities of color, but also how it is harmful and divisive within non-black families as well.

With hopes of building solidarity, Bryant, a black queer organizer with the Los Angeles chapter of the nationwide Black Lives Matter movement, shared how audience members could begin their support through self-awareness and a curiosity to self-educate themselves on issues affecting the black community, including a willingness to “show up,” especially when black leadership asks for specific support from its allies. Bryant also powerfully reminded the audience that the Nikkei community is connected with the black community through much more than history, but also through the very bodies of mixed-black and Nikkei people. The audience then heard from one of those prophetic voices, Rook’s 15-year-old daughter, Mariko Rooks.

Representing their generation, Mariko Rooks and 18-year-old Alex Kanegawa made a call to action for greater efforts of inclusion, awareness and solidarity from Nikkei community members. Often pulled between two racial identities, Mariko Rooks shared her experiences of people telling her that she is “not one of them,” as a way to deny when they hurt and offend her with anti-black statements. She reminded everyone that she, too, is “one of them,” as a call to realize the harm of anti-black racism, the need for change and the immensity of today’s racist society on her life that matters.

From the Black Lives Matter website, the emcees shared: “Today, every 28 hours, a black man, woman or child is murdered by police or vigilante law enforcement. An estimated 25.1 percent of black women live in poverty. This is higher than any other ethnic group. The average life expectancy for a black transgender woman is 35 years.”

And with a moment to register those facts of today’s reality, the audience was asked: “Do black lives matter to Japanese Americans?” We ask with the hopes of not only remembering the historical connections, but the need to build meaningful contemporary ones in a time so critical as now.