Kaitlin Wong of Belmont is awarded a $1,000 scholarship. 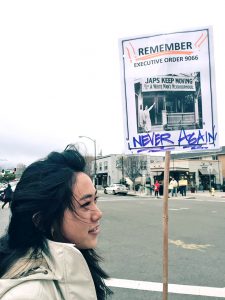 The international nonprofit organization Facing History and Ourselves announced May 1 the 10 student winners of its 2017 Facing History Together Student Essay Contest. Among the finalists was Kaitlin Wong of Belmont, Calif., who was awarded a $1,000 Upstander Award scholarship for her essay submission, “Choices.”

The contest is an annual event that invites students from across the U.S., Canada and United Kingdom to provide their perspectives on a topic that helps shape their world.

This year’s contest, “Making Choices in Today’s World,” asked students to reflect on a powerful quote from the late Elie Wiesel, Holocaust survivor and Nobel laureate, and write an essay on choices they have made thus far and how their future choices will ultimately have a great impact on their lives and those around them.

Wong, a junior at Carlmont High School in Belmont, entered the contest after learning about it through the Making Caring Common Youth Advisory Board, which she has been a member since October.

Her essay submission was personal, as it detailed her grandmother’s incarceration in Rohwer, Ark., during World War II and the hardships her family faced in the years following as a result of Executive Order 9066.

“I heard about the essay contest and decided to write about my grandmother’s story because I believe that it is important that we learn more about our history in order to improve upon the future,” said Wong. “I believe in the importance of sharing the stories from the past because they allow us to reflect and learn from the mistakes, the triumphs and everything in between. Writing has given me the opportunity to do this, and I hope I can continue to represent and learn more about the Japanese American community.”

On Feb. 19, 2017, Wong and her sisters, along with their grandmother, attended the 75th Day of Remembrance ceremony in San Jose’s Japantown, where they participated in a march into the San Jose Buddhist Church, where the ceremony was held, all while shouting “Never again.”

Nearly 5,200 students submitted essays for this year’s contest, and with the help of more than 100 judges and more than 10,000 online voters, the organization selected the 10 essays that best encapsulated this year’s theme.

“With so many worthy participants, I was definitely surprised and humbled. Because it was my grandmother’s story, I feel honored to be able to share it with so many people,” said Wong, who is donating a portion of her scholarship to her high school. “This has been such an amazing experience, one I’ll never forget. I hope that people feel that the next generation of leaders is ready to take on any challenges and make the world a better place.”