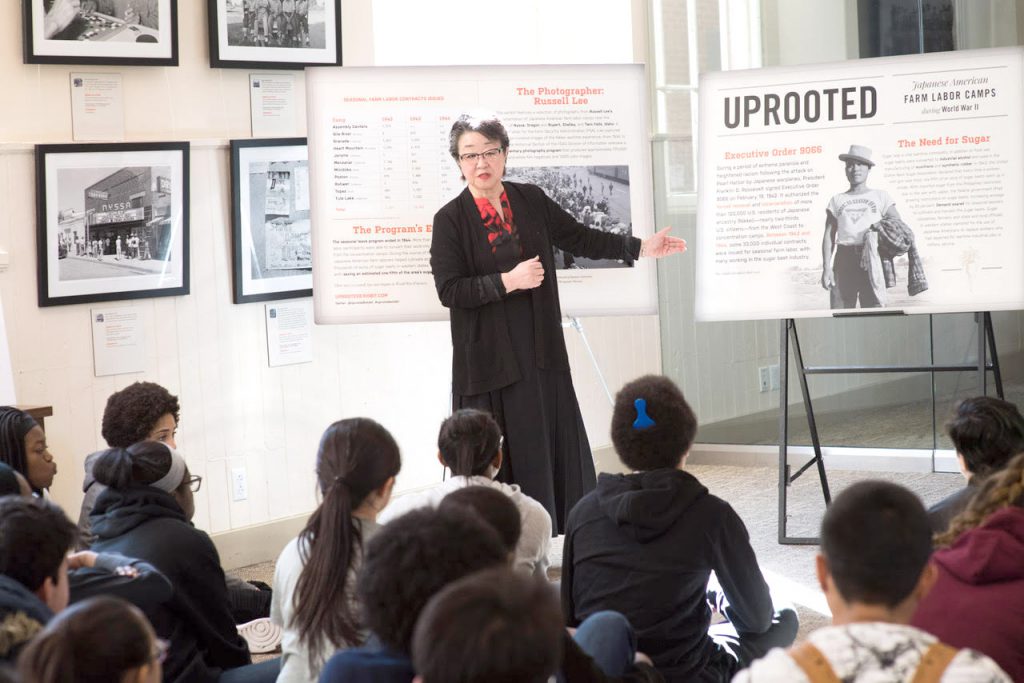 Teresa Maebori lectures ninth-graders from Albington Friends School about the history of the “Uprooted” exhibit.

How an exhibit opened people’s eyes, ears and hearts by showcasing the power to overcome adversity.

“I found your family!” he declared. As I stood there in the midst of people during Philadelphia’s Day of Remembrance 2017 opening reception for the “Uprooted” exhibit, I turned to a Nisei who held a Tule Lake Camp Directory from World War II. He turned to the page that listed my family name: MAEBORI.

Under the listing was my father’s name, William; my mother’s name, Michiko; and paternal grandfather’s name, Yujiro. It had each individual’s number and the relationship listed. It was a revelation to see in black and white the names of my parents and of my grandfather, Yujiro.

This last listing was new to me. I did not know that my grandfather, Yujiro Maebori, had lived with my parents in their barracks in the Tule Lake concentration camp. There were many moments such as this during the showing of the exhibit that told of the labor done by 33,000 Japanese Americans who harvested sugar beets for the manufacture of munitions during the World War II and for American consumption.

The “Uprooted” exhibit was a resounding success, with approximately 1,200 visitors who came to view the photographs over its 11-day run.

The exhibit, commemorating the 75th anniversary of Executive Order 9066, was unveiled during the DOR opening reception on Feb. 18 at Friends Center in Center City, Pa., which drew a crowd of 250.

David Milholland, president of the Oregon Cultural Heritage Commission and the co-curator of the “Uprooted” exhibit, gave the keynote address in the Central Philadelphia Friends Meetinghouse.

Milholland outlined the history of the exhibit, featuring the photographs of Russell Lee and of the Japanese American labor camps. JACLers from Seabrook, N.J., and representatives from the Washington, D.C., and New York chapters of the JACL also were in attendance.

During its run, many people who attended “Uprooted” commented that it was their first time learning about this dark episode in American history and how it revealed a history hidden for decades.

Several attendees wrote in the guestbook about hos this was a shameful episode and yet the Nikkei still had courage, integrity and resilience throughout it all.

Through Lee’s brilliant photography, the exhibit highlighted how the Nikkei managed to live their lives with dignity despite being unjustly confined. Lee photographed the campsites, the daily lives of the Nikkei, the laborers and their recreation. Lee’ boss from the Farm Securities Administration called him a “taxonomist with a camera.” His photographs captured in minute detail how the farm laborers and their families made their lives palatable.

One photo, in particular stood, out for me. It showed two Nikkei men raising the stars and stripes in the morning outside tarpaper barracks. Another captured a laborer in his off hours cultivating a flower garden in an arid landscape to beautify his view.

There were many photos that illustrated how the Nikkei organized their lives governing themselves democratically; writing letters home to friends; taming a pigeon as a pet; setting the table with tablecloth, dishes, utensils, creamer and coffee pot in a tent for eight family members; making lunch for fellow laborers; and a young Nikkei, posing proudly with his hat jauntily askew, standing outside the laundry showing his self-worth intact. These photographs highlighted how the Nikkei normalized their lives and were the same as other Americans as they went about their lives.

During its run, eight school groups came to tour the exhibit. About 750-800 students viewed the exhibit, with some schools coming multiple times. Several of the schools studied the concentration camps through literature such as “When the Emperor Was Divine” or “Farewell to Manzanar.”

Other schools connected the exhibit to their study of U.S. history or the study of immigration. It was amazing and heartening to take students through 1942-45. I witnessed many students grapple with the injustice that the Nikkei faced because of their ancestry and not because of any criminal act.

Many of their teachers were grateful for this exhibit and the profound impact it made. Their students could better understand how the conclusion of the Commission on Wartime Relocation and Internment of Civilians in 1982 was race prejudice, war hysteria and failure of political leadership.

They could link it to what has happened in politics today with executive orders and the rhetoric of exclusion.

There were many poignant moments when visitors came and told their personal stories. During the DOR, a Nikkei from Seabrook, N.J., exclaimed that he was in an Idaho labor camp when he was 13. During that time, the school he attended closed for a month. The Nikkei students were sent out to the sugar beet fields to work. He said he was housed in a big building with other Nikkei students. He complained of a sore wrist and no salary.

Another time, several Nikkei talked about their families and how they had lost their businesses. A University of Pennsylvania student related that her grandfather had been a pharmacist in California, lost his pharmacy, volunteered for the 442nd while his family was in a concentration camp, then moved to Ohio when the war was over and started all over again.

A woman who grew up in Seattle after the war spoke about how she went to school with Nikkei but never was taught about the concentration camps or the labor camps. She said her father was a professor of English at the University of Washington, where I attended, and I remembered his name.

Lastly, there was Louise Maehara’s grandson, Lucas Rotman. He wrote in the guestbook that his grandfather had been picked up in Hawaii as a Japanese language teacher and sent to Santa Fe, N.M., where he was incarcerated for nearly four years. I had just learned about this concentration camp earlier that week and was flabbergasted that there were more than the 10 concentration camps that are usually listed. Lucas spoke about his grandfather, too, and how he served in the 442nd and died in Italy.

I am positive there were many more stories that were not expressed. I was energized and grateful for the opportunity to bring “Uprooted” to the East Coast. It opened people’s eyes, ears and hearts. Many of our Nikkei families in JACL were uprooted but managed to put down roots and begin a new and rewarding chapter by overcoming adversity.

I dedicated this exhibit to all our Nikkei families who overcame prejudice and moved beyond adversity. Yes, and I found my family, the Maeboris. In the process, my family history came into focus with greater clarity as I understood how my parents spent their young married lives in an Idaho labor camp trying to live out the promises of citizenship in the United States.

We are grateful to funding from the JACL Legacy Grant Fund, the JACL Philadelphia Chapter, the Eastern District Council and the Racial and Social Justice Committee of Germantown Monthly Meeting.