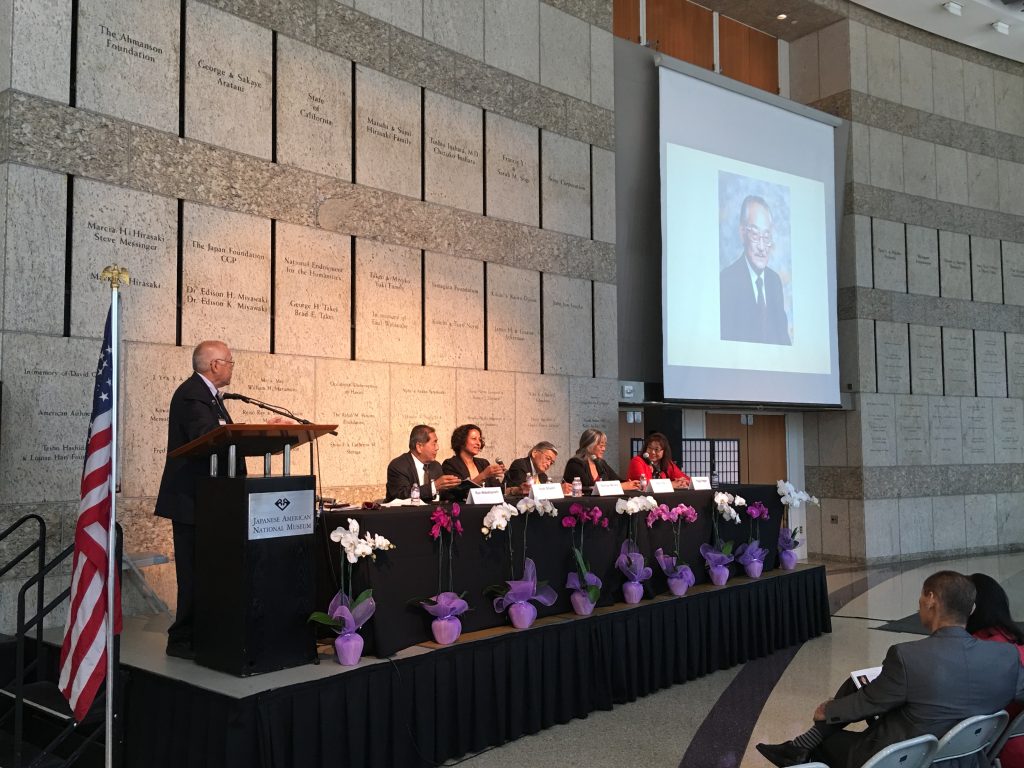 Were Minoru Yasui alive today, he’d be 100 years old — and probably quite impressed by the collection of family, friends and admirers who convened on April 30 at the Japanese American National Museum in Little Tokyo to pay tribute to the civil rights icon.

The event, titled “Civil Rights Today: A Tribute to Min Yasui,” combined the warmth of a family reunion with the serious undertones of the challenges Yasui and thousands of Japanese Americans faced in the aftermath of Dec. 7, 1941, and challenges today confronting Americans of Middle Eastern and South Asian heritage, as well as American followers of Islam in the aftermath of Sept. 11, 2001.

Born in 1916 in Hood River, Ore., Min Yasui would as a young man earn his law degree from the University of Oregon School of Law. He used his knowledge of the law and the U.S. Constitution to challenge the legality of a military curfew order directed at anyone of Japanese ancestry in the U.S. following of the United States’ declaration of war on Japan and President Franklin Roosevelt’s Executive Order 9066.

On March 28, 1942, Yasui purposely violated the curfew order with the intent of testing its legality and that of the discriminatory executive order that spawned it — and was arrested.

Yasui would spend nine months in solitary confinement — but he got his wish. Along with similar legal challenges by fellow Nisei Gordon Hirabayashi and Fred Korematsu, Yasui’s case would reach the Supreme Court. All three men lost their cases, with the high court siding with the U.S. government.

Following the defeat and after his release from incarceration at Idaho’s Minidoka War Relocation Center, Yasui would move on with his life — marrying, moving to Denver, Colo., and becoming a father to three daughters.

Decades later, Yasui, Korematsu and Hirabayashi and a small army of attorneys that included Nagae, Karen Kai, Kathryn Bannai, Dale Minami and Don Tamaki would revisit the cases and seek to have them overturned.

Yasui, however, died Nov. 12, 1986, and his coram nobis case also came to an end — but not before he succeeded in having his conviction for violating the curfew vacated. He did, however, miss the culmination of the redress movement, when President Reagan signed the Civil Liberties Act of 1988.

Ironically, as the years passed since Yasui’s death, recognition of his efforts, achievements and legacy have grown.

President Obama on Nov. 16, 2015, posthumously bestowed to Yasui the Presidential Medal of Freedom, which Obama presented to Yasui’s daughter, Lori Yasui, on Nov. 24, 2015. The city of Denver, which had already established a Minoru Yasui Community Volunteer Award, honored Yasui’s memory with a Minoru Yasui Day on Sept. 10, 2015. This year, politicians in his home state of Oregon voted unanimously to designate every March 28 as Minoru Yasui Day. 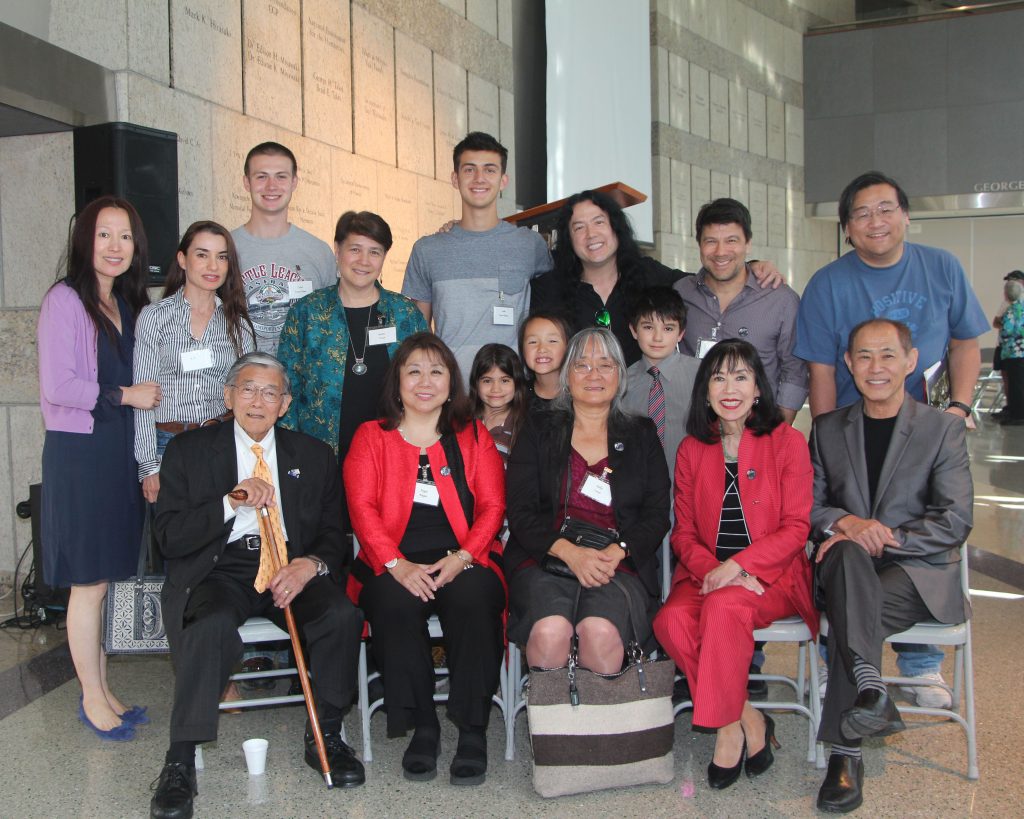 In her comments, Nagae said that even though decades have passed since the coram nobis legal team formed, its members still continue the fight against instances of what appear to be government overreach.

“Our work as coram nobis attorneys started in the late ’70s and early ’80s,” Nagae said. “Little did we realize then as young attorneys we would still know each other decades later and we would continue to work for all these decades … again and again to try to repudiate those Supreme Court cases.

“At district court levels,” she said, “the petitioners had their convictions vacated, the cases are still on the books in the U.S. Supreme Court.”

To Mineta, Minoru Yasui was his “North Star,” the person whose words and deeds kept him on track throughout his career.

In his remarks, Mineta related his recollections of the Sept. 11, 2001 terror attacks that involved the hijacking of four commercial airlines. At the time, Mineta was serving in the administration of President George W. Bush. He recalled learning via TV of the initial jetliner crashing into one of the Twin Towers in New York City, then eventually being summoned to the White House Situation Room, then getting moved to the PEOC or Presidential Emergency Operations Center beneath the White House.

Mineta related how the rhetoric immediately following the attacks included calls for rounding up Arab Americans and Muslims in the U.S. and President Bush’s response: “‘We don’t want to have happen today what happened to Norm in 1942.’ You could have knocked me over with a feather when the president said that,” Mineta said. He then credited Yasui as the oratorical giant who served as his guide in his own accomplishments, who he came to know through his brother-in-law, Mike Masaoka.

“Whenever I’ve had to do something, I’m reflectful to Min Yasui,” Mineta said. “There’s no question that there’s no one more articulate about human rights and civil rights than Min Yasui over the years.”

Ron Wakabayashi was introduced by Alan Kumamoto and the former JACL national director related his recent experiences as serving in the Department of Justice’s Community Relations Service and how that related to his experiences interacting with Yasui.

“What I’ve learned from Min, I think he had a profound understanding of human rights and civil rights that wasn’t abstract,” Wakabayashi said.

Alluding to an incident that Mineta referred to in the aftermath of 9/11 — the Sept. 15, 2001, hate crime murder of Balbir Singh Sodhi, a Sikh-American in Mesa, Ariz. — Wakabayashi noted how he attended memorial services in the years immediately after and how people who knew his background with the JACL would ask if they, too, might be put into concentration camps.

In a reflection of Wakabayashi’s comment, Sheikh noted how some politicians today have called for travel bans on all Muslims, and enhanced surveillance on Muslim neighborhoods … “are reminiscent on how politicians scapegoated and targeted Japanese Americans in World War II.”

Sheikh also noted the differences between then and now. “I believe that the Civil Rights Movement of the 1960s, the Civil Liberties Act of 1988 and the Japanese American community’s support for Muslims stopped the government from taking the horrific and extreme steps it took during World War II by placing every person of Japanese heritage on the West Coast in internment camps.”

Sheikh nevertheless asserted that the civil rights struggles facing different communities in the U.S. are far from over.

At the end of the panel discussion, an audience member asked: What would you say to this [younger] generation about finding ways, both large and small, to have an impact, both individually and as a group?