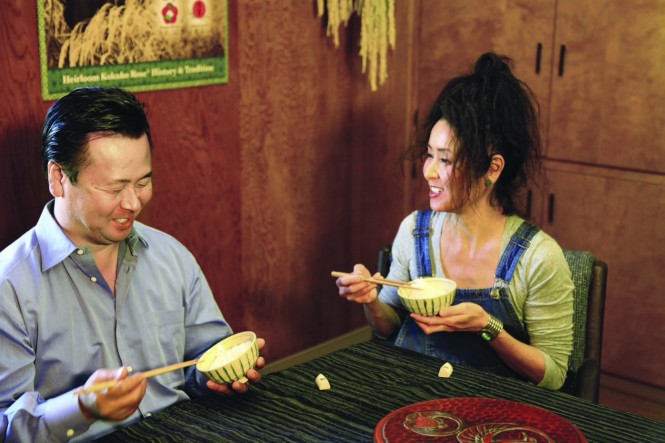 California’s oldest family-owned and –operated rice farm continues to produce top-quality product and is on the verge of expanding its offerings.

Tents are set up in rows. Fruits and vegetables are laid out on display. On a Wednesday morning, the Santa Monica Farmers Market in Santa Monica, Calif., is already bustling with groups of people on a mission to find the freshest produce. Amongst this group, you’ll find Koda Farms, a family farm that’s known for its rice. 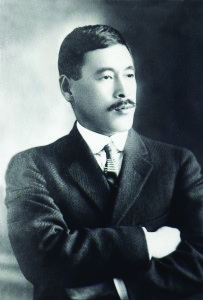 Koda Farms is California’s oldest family-owned and operated rice farm. These days, Koda Farms is managed in Dos Palos, Calif., by siblings Ross and Robin Koda, the grandchildren of founder Keisaburo Koda. The two oversee all parts of production, from growing and harvesting to milling and packaging the Japanese-style rice and rice flours. Their products can be found in Asian stores such as Mitsuwa Market, Nijiya Market and Marukai.

“I’ve always been involved in some degree in the farm because we lived in the farm and it was kind of out in the country. From a young age, I was always rode around with my dad so I would see what was going on,” said Ross Koda, whose first memories of working on the farm were chopping weeds.

Robin Koda, his older sister, also has memories of her childhood on the grounds.

“As a kid, the rice farm was a really wonderful place to grow up. In the summer, we would walk the levees, collect tadpoles, fish for crawdads and find birds’ nests,” said Robin Koda in an interview with Cool Hunting.

One of Koda Farms’ more popular items is their organic rice.

Other people have taken notice of their dedication to producing quality rice, including New York Times(ITAL) food journalist Mark Bittman, who wrote that Koda Farms probably grows the best rice in the United States. 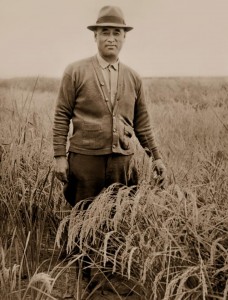 “We were very grateful to hear that because the Kokuho Rose is a very old variety — it’s over 50 years old — so, in comparison to the modern variety, newer varieties, it’s very low-yielding,” said Ross Koda. “Our target is 5,000 pounds per acre, and for the newer varieties, their target is 9,000 pounds per acre. So, we’re going completely opposite from the rest of the rice industry — we’re going for quality and not yield, and everyone else is going for yield and not quality.” 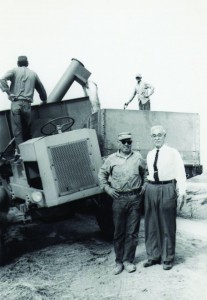 Local cooks love the rice as well. Sonoko Sakai, a Japanese cooking teacher and a food writer based in Southern California, is a frequent shopper at the Santa Monica Farmers Market. She has experimented with a variety of brands of rice while researching a cookbook on the grain.

Sakai’s family has a long history with the Kodas; in the early 1900s, her grandfather and their grandfather came on the same boat to the United States, and she has heard stories about the family and their rice ever since.

“Koda Farms is a third-generation Japanese American family farm, and it’s just a wonderful thing that they’ve kept it in the family for so long,” Sakai said. “I think it’s really important as Japanese Americans to support family farms like that. The short-grain rice is something that still needs to be introduced to the American culture.”

The founder of Koda Farms, Keisaburo Koda, was born in the town of Ogawa in Japan’s Fukushima prefecture. He arrived in California in 1908 and took up farming in the late 1920s. Known as the “Rice King” among Japanese Americans, he helped pioneer rice-growing techniques like sowing seed with airplanes.

When World War II broke out in 1941, Executive Order 9066 was passed, mandating the relocation of Japanese Americans to internment camps. The Koda family originally planned to close their operation until they could return, but the U.S. government mandated that the business continue to run to produce food and fiber. As a result, they had to turn the business over to strangers to manage it for them. When the Koda family returned after the war, they found that their land, equipment, homes and livestock had been liquidated. The family began to rebuild their business, and Keisaburo’s sons, Edward and William, gradually repurchased landholdings. In the late 1940s, the Koda family discovered an untapped market for “sweet rice” and thus became the first commercial growers of sweet rice in California.

Leaving his sons to manage the business, Keisaburo became an active member of the Japanese American Citizens League and launched the People’s Rights Protection Assn. in 1945 to lobby against the Alien Land Law.

“My grandfather was always active, but especially after World War II, he really devoted most of his time to gaining civil rights equality for

Asians in the U.S.,” said Ross Koda. “The most heinous thing was the Alien Land Law, which prevented Asian immigrants from owning land in the U.S.” 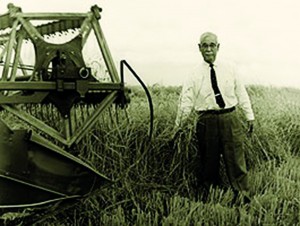 Keisaburo inspects the harvesting of mature rice, circa the late 1950’s. Photo courtesy of Koda Farms

As third-generation owners, both Ross and Robin Koda face challenges with the farming business, particularly with the issue of water usage.

Even with these difficulties, the San Joaquin Valley-based business has plans in store for their loyal customers.

“We’re going to introduce some organic garbanzo and organic black-eyed peas, which are rotation crops for the organic rice. We do it to improve the soil quality. The legumes, the black-eyed peas and the garbanzos — by planting that before the rice crops, we’ll get most of our nutrients for the rice from the legume crop. The products will be available to be purchased later this year,” said Ross Koda.