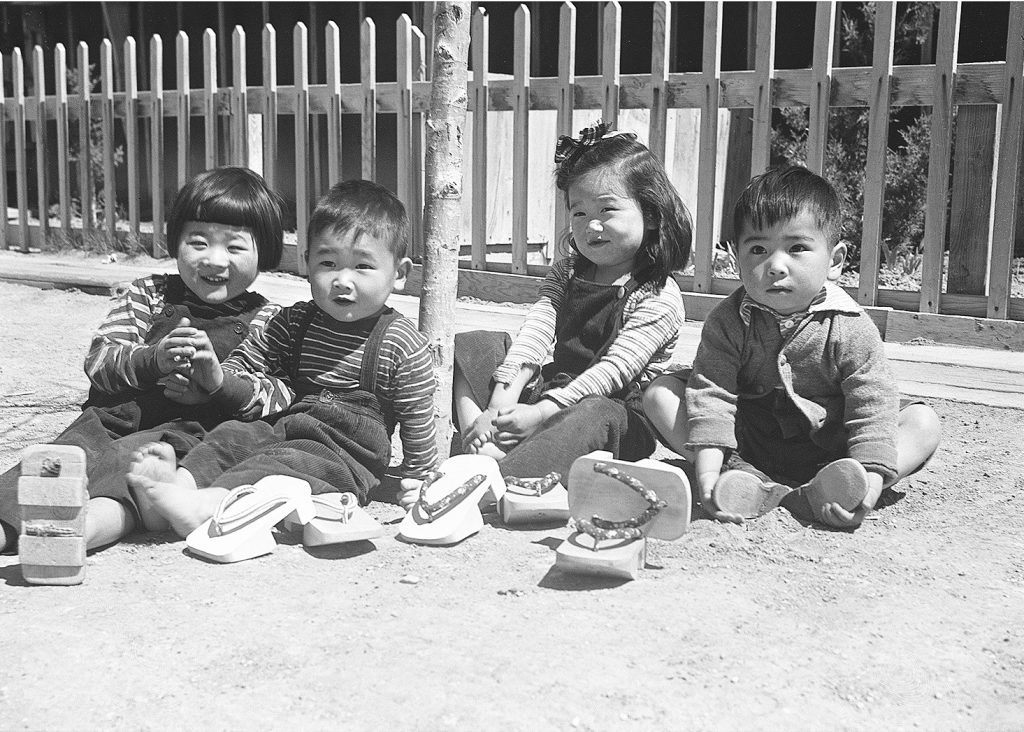 The Library observes Day of Remembrance with a special virtual conversation featuring historian Greg Robinson, author of ‘By Order of the President.’

The Franklin D. Roosevelt Presidential Library and Museum marked the 2022 Day of Remembrance — in observance of the 80th anniversary of President Roosevelt’s signing of Executive Order 9066 — with a special conversation featuring historian Greg Robinson, author of “By Order of the President,” on Feb. 16.

The virtual discussion, which had an encore presentation on Feb. 19, was moderated by  Library Acting Director William Harris and made possible through the generous support of Patti Hirahara. (To view the program, visit https://youtu.be/FoijlJY8Kx0.)

In the tense weeks after Japan’s Dec. 7, 1941, attack on Pearl Harbor, many Americans — particularly those on the Pacific Coast — feared enemy attack and saw danger in every corner. Rumors and sensational media reports heightened the climate of fear.

It is widely viewed today as one of the darkest moments of the Roosevelt Presidency and a serious violation of civil liberties and basic human rights.

Robinson, a native of New York City who is a professor of history at the Université du Québec à Montréal, and Harris spoke in a wide-ranging conversation that touched upon multiple aspects of policy development and implementation, as well as the personal impact on Japanese Americans, which can never be forgotten in the broader discussion about decision-making and moral leadership.

“We cannot forget the individuals and their suffering, the people whose lives were harmed or, in some cases, broken by this policy and by how it was carried out,” Robinson said.

In conducting research for his books, Robinson noted how he met and spoke with Japanese Americans who had been forcibly incarcerated during WWII and how the experience forever changed their lives. 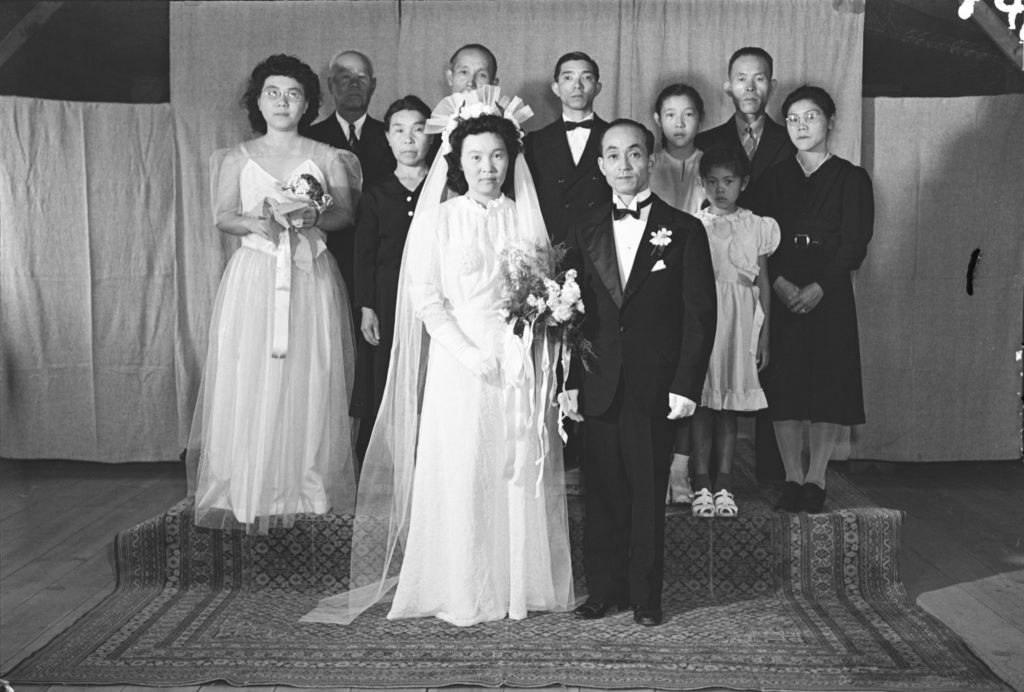 A bride and groom pose for a wedding day photo on July 24, 1944, with friends and family members inside a camp recreation hall. (Photo: George and Frank C. Hirahara Collection, WSU Libraries)

“I think that the anger I felt or the sense of betrayal over the government’s treatment of Japanese Americans is a product of my talking to people about how a very small thing to bureaucrats can be a very meaningful and decisive thing in people’s lives,” he said.

Robinson also provided insight into the Canadian approach to incarceration, which provided another lens through which to consider these policies, the origins of which, as Robinson noted, preceded the war by several years.

“I think that public opinion definitely played a crucial role in Roosevelt’s decision to sign EO 9066 and let the Army handle Japanese Americans. There was a near consensus among the congressional representatives of the West Coast that Japanese Americans had to be dealt with, and there were people who were threatening to take the matter public or to find ways to put pressure on the president,” Robinson said. “Certainly, the case of Canada where West Coast public opinion pushed the Canadian government to remove Japanese Canadians from the coast in spite of the fact that the Army and the Navy in Canada said that it was not necessary tends to indicate that there’s other forces other than military necessity that come into play.”

The conversation also went on to explore Eleanor Roosevelt’s views, her acquiescence to the broader policy and her ultimate shift on the subject, resulting in public acts and private efforts in support of Japanese Americans.

“That’s one of the most fascinating aspects of the connection between FDR and Japanese Americans is the fight and the struggle between FDR and Eleanor,” Robinson said. “. . . she could only go so far because of her loyalty to FDR at least in public, but she found all these different ways to help Japanese Americans to make clear her sympathy. . . . In 1943, she actually visited the Gila River Camp and gave a speech to the inmates and then afterward went to Los Angeles and sort of in the face of West Coast public opinion said the sooner we get these people out of the camps the better … ”

The Franklin D. Roosevelt Presidential Library and Museum, located in Hyde Park, N.Y., endeavors through exhibits and programs to critically assess all aspects of the president’s life and political career, as well as that of Eleanor Roosevelt, their professional associates and family and the times in which they lived. 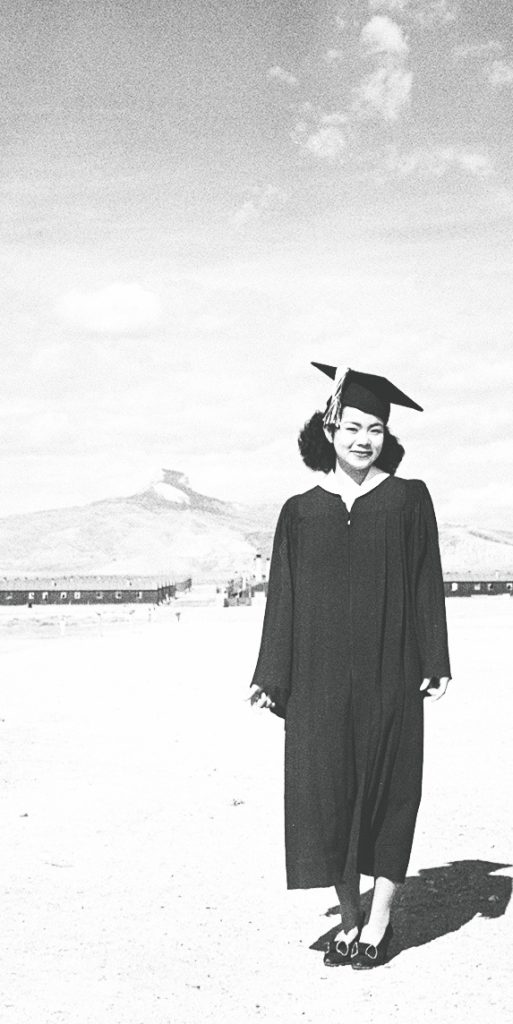 Within the permanent exhibit, “Confront the Issues” areas offer visitors the opportunity to explore multiple viewpoints related to controversial and troubling aspects of the Roosevelt era, such as Japanese American Incarceration.

According to Harris, “It is imperative for us, as a public institution, to provide a forum for a fair and rigorous assessment of this pivotal time in American and world history and of the man who led the nation during these turbulent times.”

In 2017, the FDR Library commemorated the 75th anniversary of DOR with a yearlong special exhibition, “Images of Internment: The Incarceration of Japanese Americans During World War II.”

This commenced an effort that will remain ongoing at the Library to explore Japanese American incarceration and the long-term impacts of EO 9066.

A highlight from the Library’s own collection, and featured prominently in the 2017 exhibit, is the watercolor painting “Moonlight Over Topaz, Utah” by Chiura Obata, which was made for Eleanor Roosevelt.

Obata and his family were confined at the Central Utah (Topaz) camp. He established an art school there and continued his own work as a painter. In May 1943, shortly after Mrs. Roosevelt’s well-publicized visit to the Gila River camp in Arizona, a delegation from the Japanese American Citizens League visited the White House to express their gratitude for her concern for the treatment of Japanese Americans.

During their visit, they presented this painting of the Topaz camp to the First Lady. On June 16, Mrs. Roosevelt sent a letter to Obata thanking him for the painting; she displayed it in her New York City apartment until her death in 1962.

“Many might find it surprising that we are willing to frankly assess this dark period in American history. But the Library will continue to be a place of responsiveness, reflection and redress,” said Harris. “It is our goal that ultimately no one will find it surprising that we want to listen to all voices and support and advance scholarship, study and understanding to the triumphs and the tragedies of the American story.”

Designed by Franklin Roosevelt and dedicated on June 30, 1941, the Franklin D. Roosevelt Presidential Library and Museum is the nation’s first presidential library and the only one used by a sitting president.

Administered by the National Archives and Records Administration since 1941, the Library preserves and makes accessible to the American people the records of FDR’s presidency.

For more information about the Library or its programs, call (800) 337-8474 or visit www.fdrlibrary.org.

(The photographs included in this article were taken by George Hirahara and his son, Frank, at the Heart Mountain Relocation Center where they and other family members were incarcerated during World War II. In 1943, the Hirahara family purchased cameras and photographic equipment from a Sears, Roebuck and Company catalog and built a photo studio and darkroom underneath their family barrack. The two men took thousands of photographs from 1943-45. These photographs were part of an exhibition at the Franklin D. Roosevelt Presidential Library in 2017. The extensive George and Frank C. Hirahara Photograph Collection is now housed at Washington State University.)