Fellows Corner: We Must Do More to Mend Our Country’s Broken Immigration System 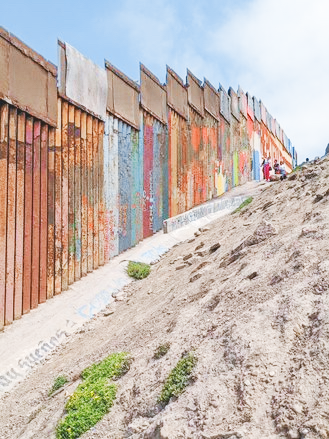 So, how was it? How was the trip?” My mind goes blank as I try to find the words to describe that weekend. I knew that any response I provided would fail to encompass the range of emotions I felt while attending the program. In writing this reflection, I recognize that despite my best efforts, I won’t be able to do the program and the community organizers that my colleagues and I had the honor of meeting justice. What I observed at the border was a humanitarian crisis, and I hope that as a community, we can come together to collectively address and eradicate the militarization of our borders and discrimination against migrants. 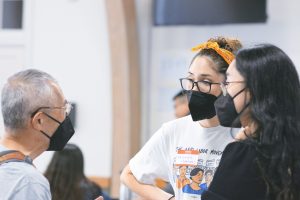 (From left) Stan Shikuma, Bridget Keaveney and Cheyenne Cheng discuss where JACL fits in the fight for immigration reform and how as an organization it could be more engaged. (Photo: Courtesy of Bridget Keaveney)

I had the privilege of attending the Asian Pacific American Labor Alliance’s Border Tour from Aug. 26-29 in San Diego, Calif., and Tijuana, Mexico, with my colleague and mentor, Cheyenne Cheng (JACL youth and programs manager), and Rehana Morita, this year’s JACL/OCA summer intern.

The Border Tour was organized and hosted in collaboration with UCLA’s Labor Center. JACL Seattle Co-President Stan Shikuma and his wife, Tracy Lai (American Federation of Teachers and APALA national board member), were also among the participants.

The program’s first day consisted of workshops and panels that featured local activists and educators from within the immigrant youth movement and labor and social justice spaces. Close to 120,000 people travel across the Mexico-U.S. border every day, including asylum seekers, individuals and families who have been forcibly displaced from their country of origin and are seeking shelter, stability and freedom from persecution.

Many migrants, unfortunately, undergo hardship and trauma in their journey to seek refuge in the U.S., and upon their arrival, often face uncertainty, instability and prejudice. The marginalization of migrants cannot help but lead one to question our country’s values. Without Congressional action toward comprehensive immigration reform, the structural, insidious issues we see at our borders today will continue to perpetuate.

The first day’s panels challenged participants to work toward creating open pathways for citizenship for undocumented individuals and refugees and abolish harmful legislation and programs like Title 42 and MPP (Migrant Protection Protocols) in order to establish a more humane and inclusive means of immigrating into the U.S.

The next day offered participants two different experiences. Those who were undocumented participated in UndocuAPI Leadership Summit in San Diego, while those who could cross the border spent the day in Tijuana.

For those of us who traveled to Tijuana, the day began with a trip to Mexico’s Customs and Migrations, where each of us received paperwork to enter the country. The entire process took less than 15 minutes, in sheer contrast to the over two hours it would take us later in the day to re-enter the U.S.

Once everyone was accounted for, we made our way to CESFOM (Centro Scalabrini de Formación Para Migrantes), a vocational school that provides education, training, legal counseling and emotional support to migrants, deportees and refugees. CESFOM focuses on supporting people assimilating into local communities by providing workshops in carpentry, mechanics and other vocations.

It also prides itself on abiding by principles established by the U.N.’s Universal Declaration of Human Rights, stating that one of its primary tenets is empathy, believing that empathy incites community and political participation to enact long-lasting change.

It was moving to see how seriously the team at CESFOM took the mental health of the migrants it served. It was very clear to the participants that CESFOM recognized the need for a holistic approach to support, as many migrants arrive struggling with PTSD.

Prior to visiting CESFOM, I had never seen an organization speak on migrant mental health so vocally; its commitment to ensuring that the welfare of the migrants it serves is prioritized and centered was refreshing and inspiring. (To learn more about CESFOM, please visit https://cesfom.org/.)

Next our group went to Friendship Park, a historic meeting place for families and friends wishing to reunite with their loved ones from whom they have been separated due to U.S. policy. The location of Friendship Park is unique in that it runs alongside the point of the border that cuts into the Pacific Ocean.

The park is considered sacred ground for many, as it has been a place of reunification and healing for many years. While family unity and cross-border events are at the center of the park, the enforcement zone, which splits it in half, has unfortunately made collaboration and special meetups in recent years challenging.

Despite this fact, Friendship Park remains diligent in promoting binational celebrations and reunions by endorsing and taking part in mobilizations such as the Let Them Hug campaign and hosting a weekly joint border church service that is co-officiated by priests on both sides of the border.

Our tour of Friendship Park was led by American activist Robert Vivar, who advocates for the rights of veterans who have been deported. I owe a debt of gratitude to Robert for his thoughtful lesson on the wrongful deportations of U.S. veterans. (For more information on Friendship Park, please visit www.friendshippark.org.)

Our final visit of the day led us to the Borderline Crisis Center, where we met with several of the center’s lead organizers and current migrant tenants. The BCC serves as a shelter for women, children and LGBTQIA+ individuals and families.

Upon entering the space, we were confronted with the harsh reality of the dire circumstances under which the BCC operates. It was abundantly clear that what is happening at our country’s borders is extremely problematic. It is a humanitarian crisis.

We were told that the BCC was three months behind on rent and is only able to pay one month’s worth of salary for one of its employees at this time. The director revealed to us that they have not been paid since December 2021, and they occasionally receive threats from local gangs, with one of their offices being recently set on fire.

We were also told that the Mexican government does not provide or have available grants that the BCC could apply for at this time. With the growing influx of migrants coming through the border, the need for income/donations is imperative.

At the time of this writing, the BCC has helped 3,000 migrants cross legally into the U.S. On any given day, it shelters 30-40 people; however, during moments of calamity, it has been known to accommodate upwards of 140 people.

When asked what support it needs, staff noted legal aid and funding. Those interested can help by donating in one of the following ways: PayPal (Border Line Crisis Center AC), @Borderlinecrisiscent or https://bit.ly/3RNzVTA.

One thing that really stood out to me during my visit to the center was how strongly it is centered and operated from a place of intersectionality, and how hard its staff works to ensure that racism and racial profiling are not perpetuated. As a community of defenders working to create a thriving sanctuary and space out of nothing for those seeking refuge, the BCC richly deserves support. 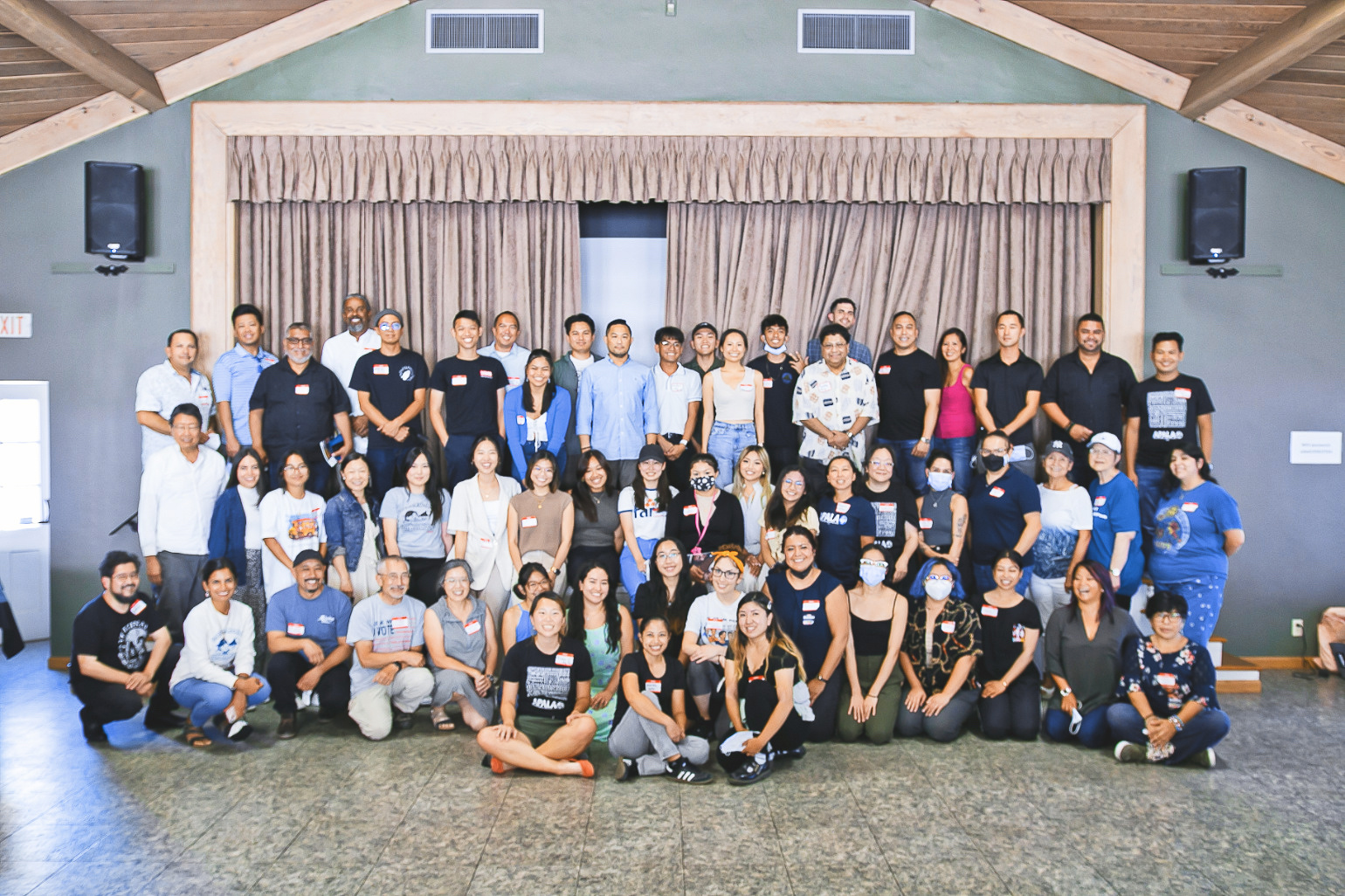