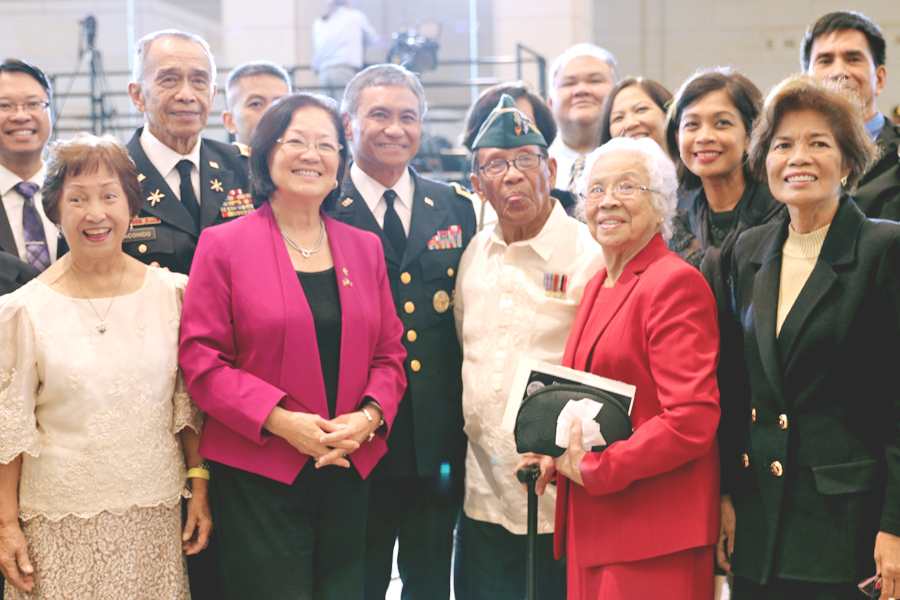 The ceremony follows the years-long effort to recognize the soldiers with Congress’ highest civilian honor.

“The United States is forever grateful for the service, bravery and perseverance of the more than 200,000 Filipino and Filipino American soldiers that serviced our country during World War II,” said Gabbard. “These loyal and courageous soldiers suffered hardships, fought bravely and sacrificed greatly, with many giving up their lives alongside their American counterparts throughout the war, yet their service was left unrecognized in the U.S. for decades. 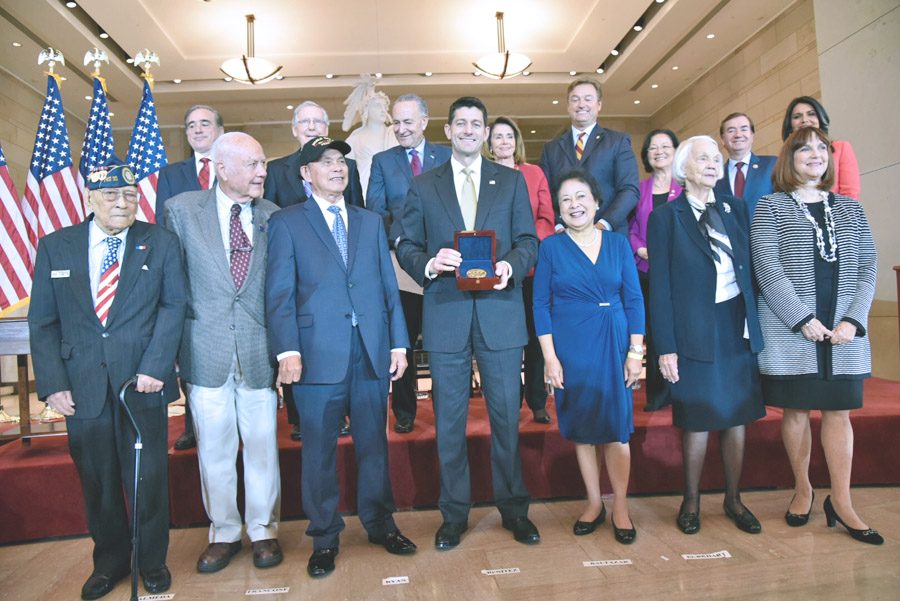 “Today, these brave soldiers are finally receiving the recognition they earned and deserve and join the ranks of heroic units like the Tuskegee Airmen and Hawaii’s own 442nd/100th Infantry Battalion as we honor them with the Congressional Gold Medal — our nation’s highest civilian honor,” added Gabbard.

“Presenting the Congressional Gold Medal to our Filipino World War II veterans is a long overdue honor for hundreds of thousands of veterans and their families,” said Hirono. “Last Veterans Day, Filipino World War II veteran Domingo Los Banos urged me to make sure our Congressional Gold Medal bill was passed that year. I hope that today’s ceremony conveyed to Domingo and every other veteran our gratitude for their service during the war and recognition of the hardship they face in receiving the benefits they earned.”

“Today, we pay tribute to the quarter of a million Filipinos who answered an American president’s call to fight for our country in the defining war of the 20th century,” said Schumer. “Those brave men, who bravely took up arms and risked life and limb on behalf of a country that was not yet their own, were heroes. It is a mark of a confident and exceptional nation to look back on its history and say we made a grievous error, but we recognize it and pledge to never let it happen again. I’m especially proud to be an American today as Congress rights a decades-old wrong and bestows the highest civilian honor on the Filipino veterans of the Second World War, enshrining in the history books their courage and sacrifice on behalf of a grateful nation.”

“Today, we recognize the extraordinary heroism and sacrifice of the Filipino Veterans of the World War II by conferring the highest honor Congress can bestow, said Pelosi. “Generations of Americans and Filipinos alike have been shaped by their courage, inspired by their service and humbled by their sacrifice. We are inspired not only by their bravery on the battlefield but also by the courage they have shown in fighting for the recognition they have earned but long been denied. We must not rest until the service of every Filipino veteran is recognized and rewarded.”

Gabbard and Hirono’s law, the Filipino Veterans of World War II Congressional Gold Medal Act (Public Law 114-265), was signed into law by President Barack Obama and awarded the medal collectively to the more than 260,000 Filipino and Filipino American soldiers who responded to President Franklin D. Roosevelt’s call to duty and fought under the American flag during WWII.

“Filipino American History Month is a time to celebrate the many and varied contributions of Filipino Americans to our nation and Hawaii,” said Hanabusa. “From their significant history in the American labor movement to a commanding presence in the arts, dance and music to their heroic service defending Americans’ freedom in World War II, Filipino Americans have a proud history in this country and I am honored to recognize their future and accomplishments.”

“Each Filipino American History Month, we celebrate the contributions of Filipino Americans to Hawaii and our nation,” said Hirono. “It’s fitting that tomorrow, we will present Filipino World War II veterans with the Congressional Gold Medal for their service and the adversity they faced in fighting for the benefits they earned. I thank my colleagues from both sides of the aisle for joining me in recognizing the Filipino American community.”