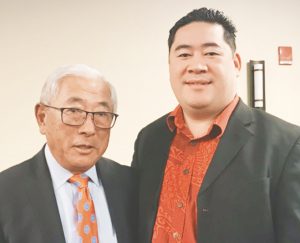 Mori, who also served as president/CEO of the Asian Pacific American Institute for Congressional Studies in Washington, D.C., was honored with the Lifetime Achievement Award following an introduction by Verona Mauga, a past president of OCA Utah.

A longtime advocate for Asian American and Pacific Islander organizations and issues, Mori also served as mayor of the City of Pleasanton, Calif., and a member of the California State Assembly for six years.

In addition, receiving the Pillar of the Community Award was Jacob Fitisemanu Jr., council member for West Valley City. Fitisemanu, who was born in New Zealand but raised in Honolulu and Taylorsville, Utah, has lived in West Valley City for 12 years.

He was appointed to the U.S. Census National Advisory Council in 2014 and serves on the board of directors for the National Asian and Pacific Islander American Health Forum. He oversees the Utah Department of Health Clinics of Utah program.

Members of the Japanese American community who have been honored in the past by OCA Utah are Wat Misaka, Edith Mitko, Irene Maya Ota and Judge Raymond Uno, who was in attendance at the event. Also present were Utah State Sen. Jani Iwamoto and Dr. Karen Kwan, Utah State Representative who is a founder of the OCA Utah Chapter and is an adviser to the board.

Under the direction of OCA Utah President Emilio Manuel Camu, director of the Pilipino American Association of Utah, guests enjoyed a Filipino buffet catered by BFF Turon. Elections were also held to select the 2020 board for OCA Utah.