For JAs, Going to Japan Is Like Going Home 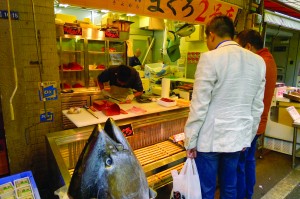 One of the fish sellers at Tokyo’s Tsukiji Fish Market, trimming that morning’s tuna catch and making the freshest sashimi imaginable. Photo by Gil Asakawa

I just returned from a two-week trip to Japan with my wife and in-laws, and I’m reminded once again that Japanese Americans should take the time and expense to visit the country of our roots. Whether you’re one generation or five generations removed from Japan, being in Japan will enrich your life and give you a renewed sense of identity.

We went first to Kumamoto on the southern island prefecture of Kyushu, where my father-in-law’s family is from. It’s an agricultural area — the air in the farmlands surrounding the city was hazy with the sweet blue smoke of burning rice straw, a by-product of the region’s harvest.

The four imperatives for JAs who travel to Japan are family (kazoku), sightseeing or tourism (kanko), food (tabemono) and buying souvenirs (omiyage). We accomplished all four in Kumamoto, visiting my father-in-law’s elderly sister, who’s hospitalized, for a reunion, dining at some terrific local fare and shopping for gifts to take back home. It helps that the city’s mascot is an adorable black bear cartoon character named “Kumamon” (kuma is Japanese for bear), so we bought a lot of Kumamon souvenirs.

The family members we met were welcoming and incredibly generous. Between our combined poor Japanese and some relatives’ passable English, we were able to communicate pretty well.

My father-in-law’s cousin, who’s now the CEO of the Mount Aso Volcano Museum, took us on a drive to the beautiful area that includes the still-active volcano, as well as an enormous land area that includes the city of Aso and a lot of farmland that sits inside a 75-mile diameter caldera, the largest in the world, created by an ancient eruption. We also went sightseeing on our own to the grand Kumamoto Castle, which is right downtown in the shopping district.

The area’s cuisine is notable for Tonkotsu ramen, made with a rich pork broth, and Basashi, raw horsemeat. Basashi Samurai who were trapped in Mumamoto Castle for 57 days in the 1800s were forced to eat horsemeat, and the practice has become tradition. It’s not bad! I also had cooked horsemeat in udon. But exotic food isn’t the only reason to go to Japan.

We left Kumamoto after five days and went to Hiroshima, our next stop.

The must-see sight is the Hiroshima Peace Memorial Park and Peace Memorial Museum, which are stark but inspiring reminders of the atomic bomb that destroyed the city and helped end World War II. Some of the exhibits and the famous dome building at ground zero that was left standing as a memorial can be emotionally draining, but they’re also life-affirming.

Then we took a tram to a ferry to Miyajima Island, where there’s a famous Shinto shrine. The shrine has a torii gate in the water offshore. At Miyajima, you can taste the local specialty pastry, called Momiji Manju, with sweet bean paste inside a shell shaped like a maple leaf.

Back in Hiroshima, we had dinner at a famous Okonomiyaki restaurant called Hassho. Okonomiyaki is a sort of pancake made with meat, seafood, vegetables, ramen noodles and a batter, cooked on a tabletop grill. It’s delicious.

We only had two days in Tokyo, so we didn’t do a lot of sightseeing. We went to Shibuya Station where the famous statue of Hachiko, the dog that was so loyal he came to the station every day to meet his master for years after the man died of a heart attack at work, and the wonderful Asakusa Buddhist Temple complex and bazaar (for more omiyage). On the final morning before heading to Narita Airport, we went to Tsukiji, the world’s largest fish market, because it’s being closed down and moved within the next few years.

Everything about the trip was worthwhile and enhanced our feelings for Japan and our own heritage.

Even if you’re a little hesitant to visit Japan, you’ll be surprised at how much of the country will feel familiar to you. My in-laws didn’t think they could speak any Japanese, but after a few days, you’ll surprise yourself at how much you do know, and how much you can comprehend. My father-in-law seemed to pull out words and phrases from the time he was stationed in Okinawa in the late 1950s — and he sounded perfectly natural.

It’s hard to describe the feeling that you’ve come home somehow, when you step off the plane and start exploring Japan.

Give it a shot. Make it your next travel destination. Go home. You’ll be glad you did.

Gil Asakawa is a member of the Pacific Citizen Editorial Board and the author of “Being Japanese American.” He blogs about Japanese and Asian American issues at www.nikkeiview.com, and he’s on Facebook, Twitter and lots of other social media. He is the 2014 Asian American Journalists Assn. AARP Social Media Fellow.