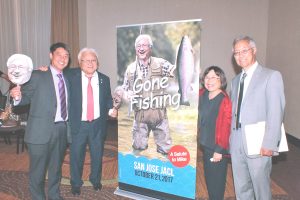 A capacity audience was on hand to help the San Jose JACL honor the lifelong accomplishments of former U.S. Congressman Mike Honda at the chapter’s annual dinner at the Holiday Inn in San Jose, Calif., on Oct 21.

In keeping with the evening’s informal atmosphere, guests were greeted with a life-size photo of Honda in fishing gear, with directions for them to take “selfies” with the honoree.

Serving as the evening’s master of ceremonies was Mike Inouye, traffic anchor at NBC Bay Area, who also moderated a “Fireside Chat” as a vehicle for recounting Congressman Honda’s distinguished history and service to his community. In addition, a video created by student interns Jason and Josh Fujinaga highlighted comments from local citizens who voiced their appreciation to Honda.

Acknowledging Honda’s enjoyment of karaoke, the evening concluded with a musical performance by an ensemble of local musicians.