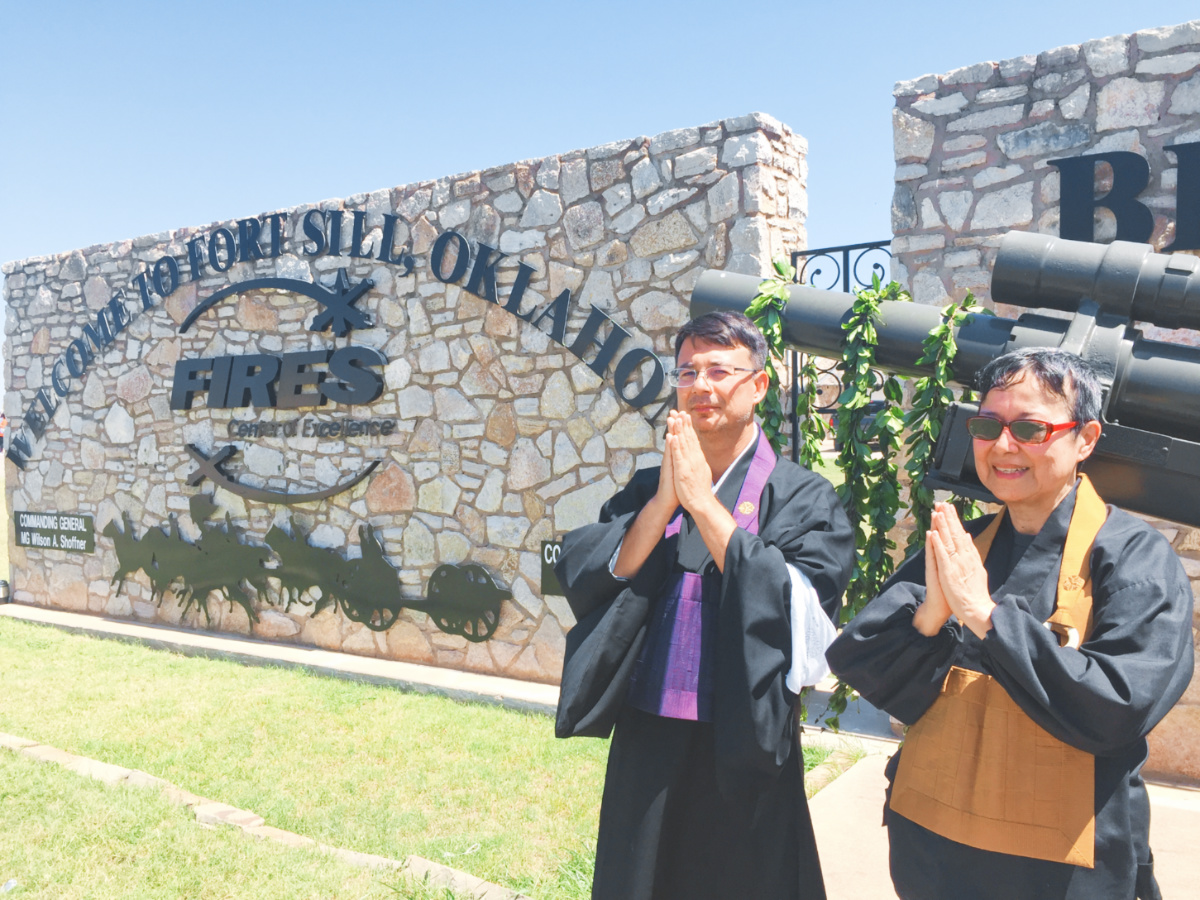 Rev. Duncan Williams and Rev. Egyoku Nakao conduct a peaceful prayer service at Fort Sill in front of a U.S. Army artillery weapon draped with leis, donated by the Oshima family, that the group brought with them. Kanesaburo Oshima was killed by a guard while incarcerated at Fort Sill during World War II on May 12, 1942, at the age of 58.

Tsuru for Solidarity and Buddhist priests join together to voice opposition against the unjust detention of migrant youth.

More than 400 people from across the country converged on Lawton, Okla., on July 20 to participate in a second protest at Fort Sill, where the Trump Administration announced plans to incarcerate an estimated 1,400 asylum-seeking migrant children as early as next month.

Tsuru for Solidarity members and a delegation of Buddhist priests joined the protest rally. Many of the Japanese Americans and their supporters had participated in a similar protest rally in front of Fort Sill on June 22.

Protesters braved the more than 100-degree heat and closed down the street leading into Fort Sill. Unlike the heavy-handed tactics taken by the military police on June 22, there were no visible military police or Lawton police officers present at this protest.

Before Mike Ishii, one of the co-founders of Tsuru for Solidarity — created by Japanese American survivors and descendants of former WWII prison camps for those of Japanese ancestry — led the group in a “Close the Camps” chant, he said, “This is nothing. If you bring the children here, every one of us represents thousands and thousands of people back home. And we will come back. You haven’t seen  anything yet.”

Williams was able to organize a Sangha Support Group comprised of 129 Buddhist priests and laypersons, guided by a seven-member steering committee.

Buddhist priests who were able to attend the Fort Sill rally included:

Fort Sill has a long history of incarcerating people of color. During World War II, Fort Sill held 700 people of Japanese ancestry. Prior to this, Fort Sill imprisoned different indigenous tribes, including Comanches and Apaches. Some of those who participated in the July 20 rally were also descendants of the Trail of Tears.