From the Executive Director: The Day the Music Died

In Japanese American politics, it can easily be said that the three men I admired the most were Sen. Daniel Inouye, Bob Matsui and Norman Mineta. And, of course, we can’t ignore Patsy Mink and Spark Matsunaga. Growing up, these were the names that I knew, even in Ohio, that represented me as a Japanese American in Congress, even if they weren’t my representatives.

Growing up in the Chicago suburbs, I recall reading the children’s book biography of Inouye and saw myself in the drawn illustrations of the senator when he was a young boy. Later, when I was in medical school and planning a conference,

I used the fledgling internet to reach out to Congressman Matsui on a whim, not actually expecting a response. He wasn’t able to attend our conference in Columbus, Ohio, but he did respond personally, and we emailed back and forth, which made an early impression on me.

I had the opportunity to meet Sen. Inouye a few times before his passing, but the one person I could almost always count on to see at any Asian American community event was Sec. Norman Mineta. By the time I had already arrived in D.C., he had already been elevated to Secretary of Commerce at the end of the Clinton administration and following a mildly contentious election compared to more recent history, had stayed on as Secretary of Transportation in the Bush administration.

When he took the position of Secretary of Transportation, he famously noted that there are no Democratic or Republican highways. It was almost a perfect culmination of his career to serve in a bipartisan cabinet going back so many years to his childhood friendship with Sen. Alan Simpson of Wyoming. Out of that friendship and spirit of bipartisan collaboration, the Heart Mountain Wyoming Foundation will be breaking ground on the Mineta-Simpson Institute at Heart Mountain in what will surely be a bittersweet ceremony later this summer.

It was that sense of willingness to collaborate and work within his own party and across the aisle that helped to secure passage of the Civil Liberties Act of 1988 for which he is revered in the Japanese American community.

These past two years have been especially challenging, as we have been starved of that personal interaction that Sec. Mineta was so generous. One of my favorite memories is from what was one of his last in-person appearances before Covid.

We had participated in a Day of Remembrance panel at the Smithsonian Museum of American History, and after the event, we were all doing the typical milling around and talking. My son was with me at my side, and Norm reached out to Akira to ask him how he was doing and if he enjoyed the program. The two of them got into what was probably a five-minute conversation. About what? I have no idea. 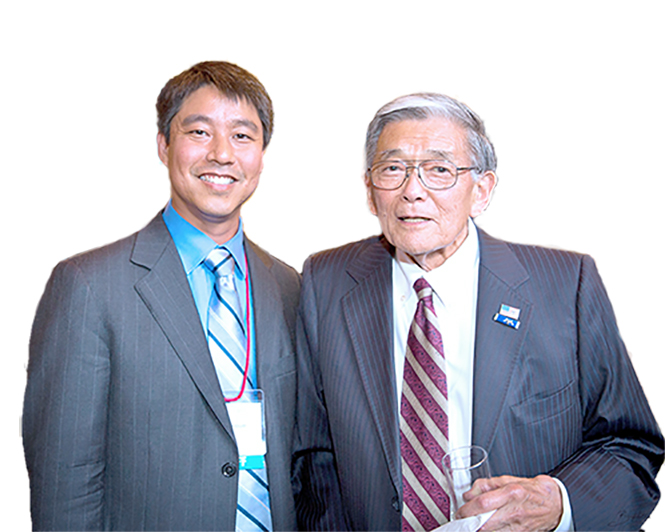 That to me highlights why he was such a revered leader in our community. It didn’t matter who you were — everyone was important to him. Even as so many others would seek him out for conversation and a picture, he would instead seek out someone like my son and make him feel important, that having been at that event was important.

My son is now 10, the age Sec. Mineta was when his family was sent from their home in San Jose, Calif., to Heart Mountain, Wyo. Sec. Mineta was always a great storyteller, and one that he told often, but also one of my favorites, was when he first saw the exclusion orders directed to “all persons of Japanese ancestry, including aliens and non-aliens.”

He asked his brother what a non-alien was. He was told that that term referred to him, a U.S. citizen. As a result, Sec. Mineta always exalted the status of U.S. citizen, but more importantly, he lived his life as one trying to honor that status.

He exemplified our duty as citizens to serve our nation and work for the good of everyone, alien and non-alien.

May we, as an organization, continue to live up to our responsibility as the Japanese American Citizens League and meet the standards of citizenship set by Sec. Mineta.

David Inoue is executive director of the JACL. He is based in the organization’s Washington, D.C., office.