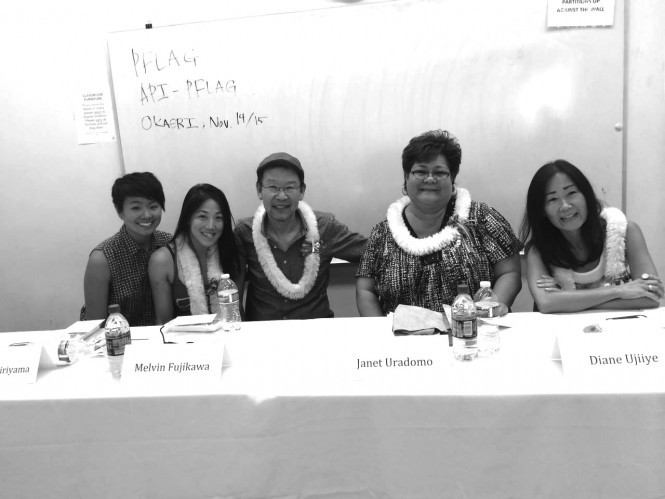 More than 70 community members gathered at the Gardena Valley Japanese Cultural Institute for “South Bay Stories: A Nikkei LGBTQ Forum for Everyone” on Oct. 4. With the goals of initiating meaningful dialogue around gender, sexuality and LGBTQ stories in the Japanese American community, the event engaged attendees through personal stories and provided ample opportunities for questions.

Diane Ujiiye, outgoing executive director of API’s CAN and longtime community organizer, moderated the panel and encouraged audience participation throughout the event.

The activity’s answers revealed a large trend: Many attendees had never discussed sexuality with their family, but learned that there were specific roles and responsibilities for girls and boys for which to conform. As Ujiiye reviewed these trends at the beginning of the program, she also showed the need to uplift Nikkei LGBTQ narratives in our community.

The panel began with Melvin Fujikawa, former senior pastor at the Christian Layman Church in Oakland, Calif., and now a spiritual director and voice coach in Torrance, Calif. Fujikawa shared his story of coming out later in life as gay-identified in his mid-50s, at a time when he felt much more comfortable and proud of who he is as a man.

In addition, Fujikawa shared his thoughts on how he reconciles with his gay and Christian identity with the interpretation that God made him the way he is for a reason, rather than it being a sin, and he sees his gay identity as a true gift.

Janet Uradomo also proudly shared her story of being the mother of a young transgender 8-year-old daughter and the various challenges her family has faced. As a toddler, Uradomo’s trans-daughter exhibited gender nonconforming behavior, such as her interest with feminine dresses and choosing to play mostly with girls rather than boys.

While Uradomo and her husband thought it was “just a phase” in their child’s development, they have realized over the last couple of years that their child is far happier with identifying as a girl.

Following their trans-daughter’s lead of how she wants to identify her gender, Uradomo and her husband recently enrolled their daughter in a Torrance public school that supports gender nonconforming youth. The couple fully supports their trans-daughter, and they want to focus on making sure she is happy with being her whole self.

Traci Kato-Kiriyama, an artist/writer/community organizer, next read from her 2011 piece in the Rafu Shimpo(ITAL) called “LGBT(JA)Q” under the “Through the Fire” column. She described some of her experiences of being queer, her mother’s support of accepting her daughter’s decision to openly identify her sexuality and also the interesting reactions of Nikkei community members who read her 2011 piece.

While Kato-Kiriyama expected people to engage with her further about her story, instead, people did not go any deeper than telling her that they read it. She moved on to encourage the attendees about the importance of opening up the dialogue, and she expressed her hope that one day it will be considered “really JA” to be actively inclusive to the LGBTQ community.

This event was a part of PSW’s Nikkei LGBTQ Initiative, which also intends to encourage community members to save the date and attend “Okaeri,” a Nikkei LGBTQ Gathering coming up on Nov. 14 and 15 at the Japanese American National Museum in Los Angeles.

Okaeri(ITAL), which means “welcome home” in Japanese, is a gathering of lesbian, gay, bisexual, transgender, queer and questioning individuals, family and allies. Attendees can expect to find support, resources and motivation through informative workshops and moving speakers, as well as the opportunity to connect with others to build greater inclusion in the Nikkei community.

For more information and to RSVP to Okaeri, visit www.okaeri-la.org or email or call Traci Ishigo, program coordinator, at tishigo@jaclpsw.org or (213) 626-4471 with any questions.