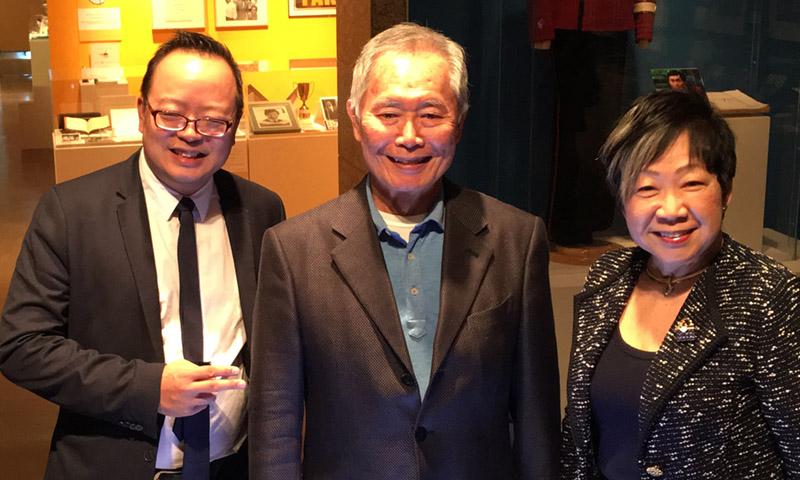 New Frontiers curator Jeff Yang, George Takei and JANM board of trustees Vice Chair Wendy Shiba meet the press on the day before the exhibition opened in Los Angeles.

More than 200 memorable items from the actor/activist are on display at JANM in a new exhibition.

When he was 68, actor/activist George Takei ignited a great, late career renaissance that led to greater visibility, more opportunities and increased fame when he came out of the closet. 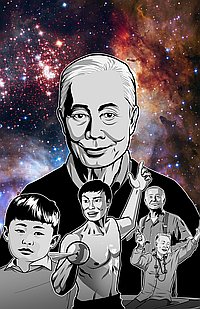 One of several original illustrations by comic artist Jamie Noguchi that accompany the “New Frontiers” exhibition on the life and career of actor George Takei.

Now, just weeks shy of 80, the “Star Trek” star has cleaned out that closet — and garage, attic and more — and is donating the content or “two very large trucks” worth of artifacts gathered over a lifetime on this Class M planet to share with the general public, mementos that might bring a smile even to the stoic visage of Mr. Spock.

The memorabilia is now on exhibit at Little Tokyo’s Japanese American National Museum in Los Angeles. “New Frontiers: The Many Lives of George Takei,” which opened to the public on March 12 and will run through Aug. 20, is the first of what JANM Board of Trustees Vice Chair Wendy Shiba said will be several upcoming exhibitions that will explore the lives and careers of Asian Americans “who have made their mark in entertainment and media.”

But self-aggrandizement and nostalgia definitely were not what Takei wanted when he was finally persuaded to have the record of his remarkable journey celebrated as the first such life and career to be put on display at JANM.

“This is something that I really didn’t expect,” said Takei in remarks during the exhibition’s media preview. “One of the subjects I was lobbying for was an exhibit on Asians and Asian Americans in the media. That has been the … burden that we’ve had to carry.”

Takei, a member of JANM’s board of trustees and its chair emeritus, was referring to Hollywood’s history of warped depictions of Asian people as “one-dimensional, unattractive characters” — except when they are “interesting, humanized characters,” in which case they often get played by non-Asians.

Takei said he had lobbied the museum continuously for such an exhibition — and when former President and CEO Greg Kimura came around to the idea, Takei found that JANM had put him in the curious position of having chosen his life and career to be the first example.

Even more curious, Takei’s presence for the opening of “New Frontiers” was just a quick in-and-out trip to be there for the opening and see it himself for the first time. That was because he had been in New York City working on the Broadway revival of Stephen Sondheim and John Weidman’s “Pacific Overtures,” set to open this spring.

“I had to come back for this opening,” said the stentorian-toned native Los Angeleno to the journalists assembled for the press preview. “I haven’t seen the exhibit yet.”“New Frontiers” is the culmination of months of work by JANM’s staff and Jeff Yang, who as the curator helped to catalog and categorize what JANM calls the “George and Brad Takei Collection.”

Noguchi, who was born and raised in Washington, D.C., and is also known for his Web comic “Yellow Peril,” said he completed about 15 illustrations. While he could relate to aspects of Takei’s story — with two uncles who were incarcerated at Tule Lake during World War II — Noguchi said he found working on this project to be “really challenging.”

Noting the immensity of the amount of the collection’s material, Yang said his solution was to tell the sort the exhibition into five “chapters” that reflect the many facets of Takei’s life and professional career.

To Yang, it seemed appropriate to repurpose phrases from the original “Star Trek’s” opening monologue for those chapter’s titles: “To Boldly Go” (becoming a political, Asian American and gay rights activist), “Strange New Worlds” (show business), “New Life and New Civilizations” (the journey of his stage musical “Allegiance” to Broadway), “Five-Years” (childhood, including incarceration as a child) and “The Final Frontier” (Takei’s life now as a multimedia “digital superstar”).

Takei has for decades used his celebrity status to discuss the Japanese American incarceration during WWII, which he experienced as child, when he and his family were held at War Relocation Authority Centers in Rohwer, Ark., and Tule Lake, Calif. “The internment experience was a very American experience,” he said. “The importance of that chapter is an American lesson. That has to be learned, and it clearly has not been learned, as we are discovering again in our time.”

A related chapter getting the spotlight is his recent experience as a producer and co-star in “Allegiance,” the musical stage play dramatizing the experience of mainland Japanese Americans whose lives were disrupted by Executive Order 9066. “Allegiance” eventually reached Broadway to mostly positive reviews, and a recording of the stage play was shown in select movie theaters to coincide with the 75th anniversary of Executive Order 9066.

Most people know already of Takei’s “strange new worlds” chapter from two “Star Trek” TV series (live action and animated) and several “Trek” feature films. But he has also had decades of TV appearances up to the contemporary times (“Heroes,” “Celebrity Apprentice”), voice acting and narration (“Kubo and the Two Strings,” “Never Give Up! Minoru Yasui and the Fight for Justice”) and satellite radio (Howard Stern).

“In show business, luck plays a big part,” Takei said, as he explained his good fortune in being cast as starship helmsman Mr. Sulu in “Star Trek” by creator Gene Roddenberry. He noted how Roddenberry in the 1960s used science fiction as a means to portray issues of the time to discuss the “turbulent time” of the Civil Rights Movement, the Vietnam War, the Cold War and more. The “Star Trek” experience was a career boon for Takei and his fellow castmates that would last a lifetime.

Dealing with those issues raised in “Star Trek” may have helped him plot a course to his present-day gay rights activism with his spouse, Brad Takei, which is also part of the exhibition — but so, too, are mementoes of his political life, from serving as president of the student council in junior high school to his civic and political life in the 1970s and early 1980s, when he ran for a seat of the Los Angeles City Council (he didn’t win), served of the board of the Southern California Rapid Transit District and made an unsuccessful bid for a seat in California’s Assembly.

Now, as he enters his ninth decade, Takei will no doubt continue add to his fifth chapter and exploit his popularity among his many different constituencies as a social media maven. A few years ago, Takei appeared on “Celebrity Apprentice” with Donald Trump, who famously told Takei, “You’re fired!” prior to becoming the current Tweeter-in-Chief. Takei now uses his own vast Twitter following to tweak the president’s missteps and mistruths.

When he was introduced to the media for the press preview, Takei joked that during the introduction, Yang kept referring to him in the past tense. “I’m still here! I’m not history yet. We have much further to go yet,” he said.

In other words, don’t be surprised if George Takei continues to live long and prosper as he seeks out new frontiers and boldly goes forward, be it on a Broadway stage, a Hollywood soundstage, a picket line or in a starship’s captain’s chair. 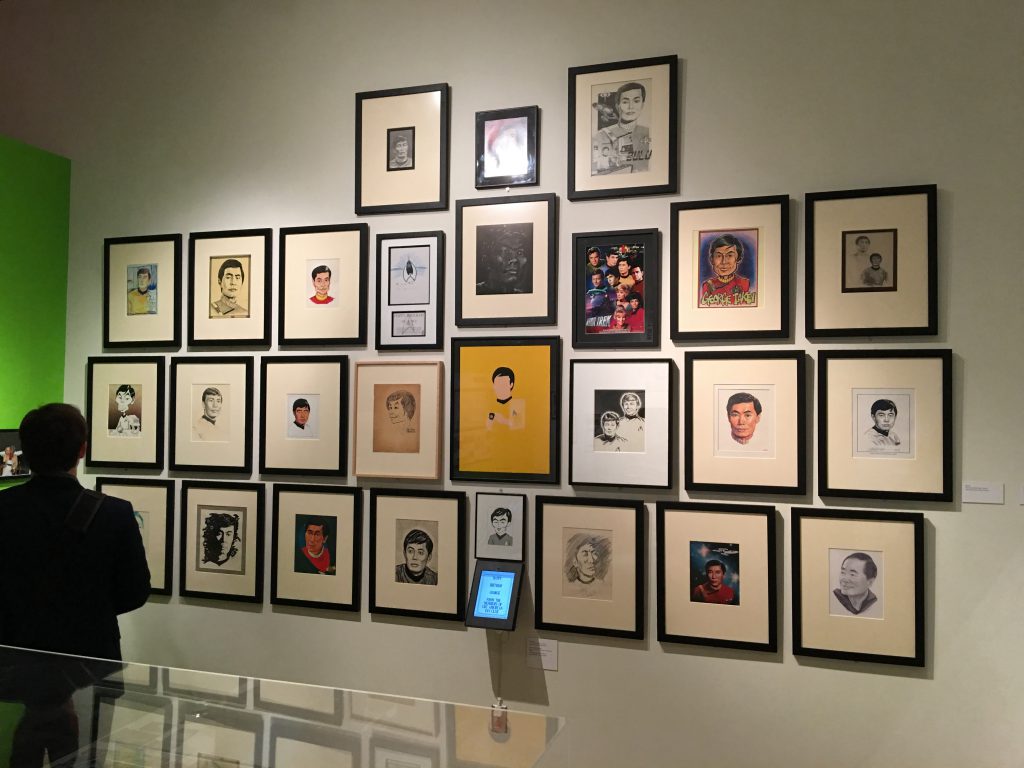 A collection of fan art accumulated by George Takei over the years adorns a wall at the Japanese American National Museum’s exhibition on the “Star Trek” star.