LOS ANGELES — Go for Broke National Education Center has named George A. Henning as its new chairman, with Junior Bryant, Craig Ishii and Kimberlee Tachiki-Chin joining the board of directors of the national nonprofit organization, it was announced recently.

Henning is chairman, president and CEO of Pacific Global Investment Management Co., a Glendale, Calif.-based investment advisory firm he founded in 1991. He currently serves as portfolio manager for several of the firm’s investment funds. Henning holds a bachelor’s degree from Geneva College and a master’s degree from Indiana University.

A longtime supporter of GFBNEC, Henning was introduced to the Nisei veterans’ legacy by philanthropist and 522nd Field Artillery Battalion veteran Manabi Hirasaki, a close friend who shared his family history and World War II experiences with Henning. 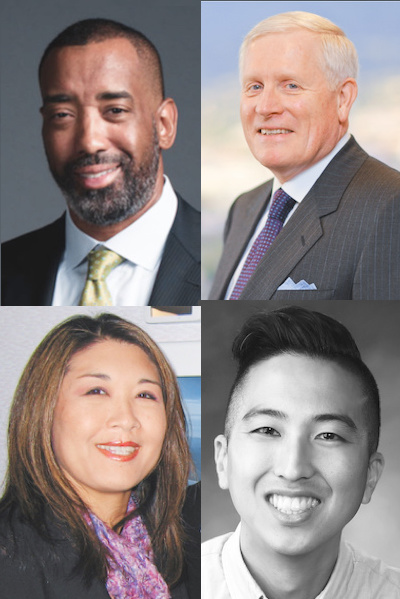 “His humble recollection of events and experiences under such terrible circumstances for any U.S. citizen was painful to comprehend,” Henning said. “We often discussed the importance of passing this legacy forward to future generations. I’m honored to assume this leadership capacity to advance the legacy of ‘Go for Broke.’”

“We’re fortunate to have George’s extensive professional and business experience to help us expand the legacy of our Nisei WWII veterans and their contributions to our democracy,” Maki said. “His leadership will help us attract new supporters and broaden our influences as we reach out to new communities and  generations.”

GFBNEC’s new board members represent a range of professions and disciplines.

Bryant, an adviser to emerging start-up companies, previously served as vp and national marketing and sales director for Pacific Global Investments. A veteran of the National Football League, Bryant retired from the San Francisco 49ers in 2003 after a 10-year career as a defensive lineman. He also is active in philanthropic activities, serving as a board member for the Forever Young Foundation and co-founder of Legends of Sports Foundation. He holds a bachelor’s degree in business administration from the University of Notre Dame.

Ishii, the integrated marketing communication manager at Beckman Coulter, has dedicated his career to businesses and organizations that support positive social development. He has served in several positions with Japanese American community organizations, including the JACL and the Little Tokyo Community Council. He also was a founding member and executive director of Kizuna, a nonprofit dedicated to educating and engaging the next generation of Japanese Americans. He holds a bachelor’s degree in history and economics from the University of California, Los Angeles, and a master’s degree in public administration with a certificate in nonprofit management from California State University, Northridge.

And Tachiki-Chin has served as senior field deputy for U.S. Congresswoman Lucile Roybal-Allard for more than 20 years. She has extensive experience with community and nonprofit organizations, including the JACL, the Asian Pacific Women’s Center and Pacific Asian Counseling Services. In addition, she is a founding member of the Asian Pacific American Legislative Staff Network. Tachiki-Chin holds a bachelor’s degree in kinesiology and physical education from California State University, Northridge.

Henning noted that the new board members bring additional depth to the GFBNEC board.

“We honor the Japanese American soldiers who served with loyalty and distinction during WWII, despite the U.S. treating them as a threat to their own country and the incarceration of many of their families,” he said. “Today, those lessons couldn’t be more relevant, with citizens of other races other facing threats because of their cultural backgrounds or religious  beliefs. Junior, Craig and Kim bring fresh  expertise to our board as we work toward a future  that values inclusion, tolerance and mutual respect.”