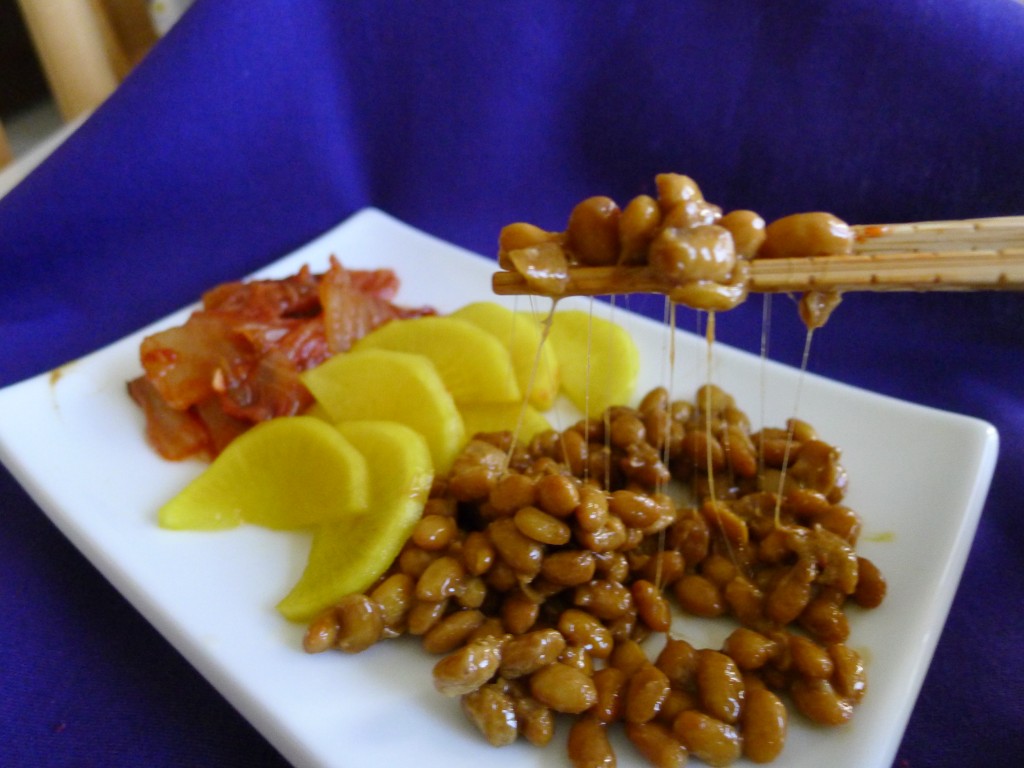 The stinky and slimy natto dish is a fermented soybean is all too delicious and misunderstood. Photo by Gil Asakawa

I’m a foodie. Everyone knows this. I write about food, I take photos of food everywhere I dine, I love to cook and I love food from everywhere. One of my personal rules has always been, if someone somewhere in the world eats something, I’m willing to try it . . . at least once.

So, I’ve had chocolate-covered ants. Fried grubs. The meat of some strange animals that you wouldn’t think humans ought to eat, like rattlesnake brats.

In a way, I was prepared for this gastronomic open-mindedness (open-stomachness?) by growing up Japanese. I was raised in Japan until I was 8, but even lifelong Japanese Americans know what I mean when I say that Japanese cuisine — although hailed today as the epitome of high culture and is accepted as mainstream with commonplace dishes like sushi, ramen, tempura, sukiyaki and teriyaki — can feature some nasty(ITAL) stuff.

Foul-smelling, slimy and icky-textured. Food that’s best swallowed quickly, without chewing or thinking about it. No savoring the flavor, just pop it in and send it down the chute.

A lot of people probably would disagree with me, but I feel that way about oysters. I think they’re gross. Keeping my personal rule in mind, I’ll eat them if I’m at a nice restaurant in a town like Boston, where oysters are de rigueur. But I won’t seek them out and suggest an oyster bar for a night out.

Natto, in particular, seems to turn off lots of Japanese in Japan as well as stateside. I’m told natto stinks, though I’ve never felt offended by its odor. People say it smells like dirty feet, but durian — the ugly, spiny fruit of Southeast Asia — smells much more like dirty feet than natto. But more than the smell, people think natto is yucky because of its slimy, snotty texture. From fermentation, the soybeans are coated with a transparent film that evokes the slimy coating of the creatures in the “Alien” movies. But you know what? Natto is one of the most healthy foods you can eat. (Not so much the white rice you’d mix it with, however . . . .)

Takuan is a side dish I grew up with, one of the myriad of “tsukemono” or pickled and prepared vegetables that are served alongside traditional Japanese dishes. Takuan is just pickled daikon radish. It’s usually bright yellow, from the addition of ground turmeric, and tastes sweet and salty and crunches when you eat it. But when you just smell it, it stinks to high heaven.

My wife, Erin, has a wonderfully easy family recipe for making daikon, so every couple of months, she makes a big bowl of it and puts it in five or six jars for my mom, who eats a few pieces with every meal. Once it’s made, we let it set overnight on the kitchen counter, and then I try to get the jars to my mom’s house right away because it stinks up the whole house, and my car, too. For the next couple of months, every time my mom opens her refrigerator door, it smells like something crawled in there and died.

It tastes great, though, and unlike natto, there’s no yucky texture to deal with!

Another favorite stinky dish is kimchee, or fermented cabbage with red chili pepper powder and garlic, a Korean staple that my mom used to make years ago, and one that Erin and I have been making the past year as we’ve gotten into fermenting food (Warning: A lot of fermenting means a lot of stinky food).

Kimchee is made primarily using napa cabbage, but you can also make it with cucumbers and daikon. The daikon by itself is intensely pungent, but making it into kimchee raises the odor level several notches.

Japanese love daikon radish. When we visited my uncle and aunt in the small fishing town of Nemuro a few years ago in Japan, it was daikon harvest season, and every home in town had a rack in the yard with more than a dozen — sometimes several dozen — daikon strung up to dry. Once they shrivel up, they’re cut and used for various side dishes including takuan.

We also grate daikon and glop it on top of fish or meat, adding that layer of unmistakable odor to the tastiness of the protein underneath. With soy sauce added, it’s pretty darned delicious!

Growing up, my mom used to cook the family Western-style dinners like steak, burgers or even spaghetti, but she often would cook a Japanese meal for herself, and that meal would often be salted salmon pan-fried, with rice and tsukemono such as takuan, or maybe kimchee. This was my food culture as a child.

I bet it was the food culture in many Japanese American homes, even in the years after WWII when many families tried to underplay their Japaneseness, because food culture is one of our strongest ties to the past, and to our community.

Gil Asakawa is a member of the Pacific Citizen Editorial Board, and the author of “Being Japanese American. He blogs about Japanese and Asian American issues on his blog at www.nikkeiview.com, and he’s on Facebook, Twitter and lots of other social media. He was recently named the 2014 Asian American Journalists Association AARP Social Media Fellow.