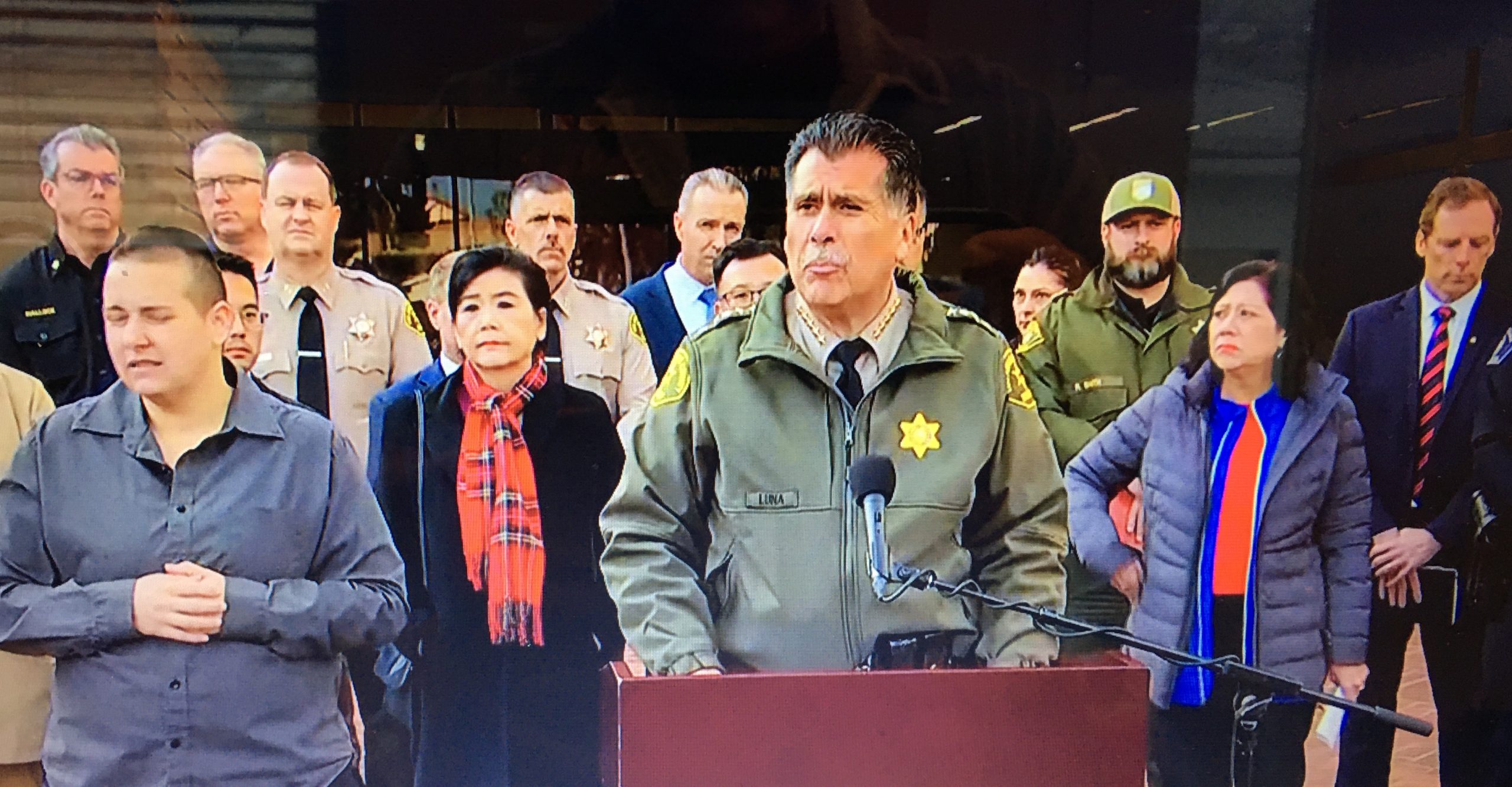 Los Angeles County Sheriff Robert Luna addresses the media at a live morning news conference on Jan. 22 following a mass shooting in the Los Angeles suburb of Monterey Park, Calif. Police are searching for a suspected gunman, described as an Asian male.

Sheriff: Suspect in dance club shooting killed self in van

Manhunt underway for gunman, described by Police as an Asian male

MONTEREY PARK, Calif. (AP) — A gunman killed 10 people at a ballroom dance studio amid Lunar New Year celebrations Saturday night and then may have tried — but failed — to target a second dance hall, authorities said Sunday. An urgent search was underway across the Los Angeles area for the suspect.

L.A. County Sheriff Robert Luna said the shooting at the Star Ballroom Dance Studio in Monterey Park left five women and five men dead and wounded another 10 people. Then 20 to 30 minutes later, a man with a gun entered the Lai Lai Ballroom in nearby Alhambra.

Luna said it’s still unclear whether the events are connected.

The incident in Alhambra “may be related,” Luna said. “We’re not quite there yet, but it’s definitely on our radar screen.”

The suspect in both cases was described as an Asian male. He entered the Alhambra club with a gun, and people wrestled the weapon away from him before he fled, Luna said. Investigators are interested in a white cargo van that was seen in the area, he added.

The sheriff declined to say what type of gun was recovered in Alhambra. He said investigators believe the gun used in Monterey Park was not an assault rifle.

The massacre, which sent fear through Monterey Park and Alhambra’s large Asian American communities, was the nation’s fifth mass killing this month. It was also the deadliest attack since May 24, when 21 people were killed in an elementary school in Uvalde, Texas.

Monterey Park is a city of about 60,000 people on the eastern edge of Los Angeles and is composed mostly of Asian immigrants from China or first-generation Asian Americans. The shooting happened in the heart of its downtown where red lanterns decorated the streets for the Lunar New Year festivities. A police car was parked near a large banner that proclaimed “Happy Year of the Rabbit!”

The celebration in Monterey Park is one of California’s largest and had attracted tens of thousands throughout the day.

Two days of festivities, which have been attended by as many as 100,000 people in past years, were planned. But officials canceled Sunday’s events following the shooting.

Tony Lai, 35, of Monterey Park was stunned when he came out for his early morning walk to learn that the noises he heard in the night were gunshots.

Wynn Liaw, 57, who lives about two blocks from the Monterey Park studio, said she was shocked that such a crime would happen, especially during New Year’s celebrations.

“Chinese people, they consider Chinese New Year very, very special” — a time when “you don’t do anything that will bring bad luck the entire year.”

She took a picture of the activity outside the studio to send to relatives and friends in China “to let them know how crazy the U.S. is becoming with all these mass shootings, even in the New Year.”