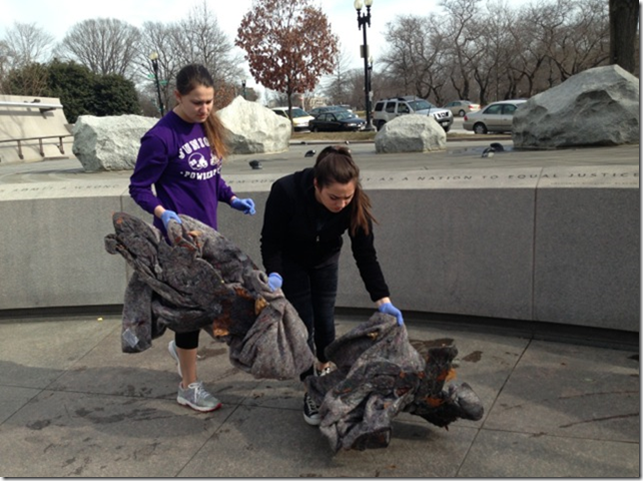 GWU students Alex Gross (left) and Adrienne Coulter pick up frozen blankets at the National JA Memorial. Behind them is the inscription of President Ronald Reagan’s national apology and the pool of water with five rocks, each representing five generations of persons of Japanese ancestry. Photo by Alyssa Coulter

Following a briefing of the memorial by a docent from the Japanese American Veterans Assn., Alyssa Coulter and her sister, Adrienne, volunteered to organize a contingent of GWU students to clean the memorial as a community service.

In an email report to the JAVA Speakers Bureau, Alyssa Coulter said, “We enjoyed helping the community by being able to clean up the memorial. It looks great and I am glad that people visiting will get to see it in a clean condition.”

Professor Bonnie Morris, who invited the JAVA speakers to talk to her class at GWU, said that she is “grateful to share this important (Japanese American) history with her classes and is proud of her students’ community spirit.”

Various officials from Japanese American organizations also expressed their appreciation to the GWU students and Morris.

JAVA President Gerald Yamada told the GWU team that the Japanese American community appreciates “this considerable initiative. . . . I am glad you recognized the need and took action.”

Said Dan Matthews, chairman of the board of the National Japanese American Memorial Foundation, to Morris: “Your leadership with your students is largely responsible for this wonderful moment,” and he told the students that “Nisei patriotism . . . and acts of heroism inspire all Americans.”

And Craig Uchida, chairman emeritus of NJAMF, said, “I know that families who were interned and veterans who served during World War II are grateful.”

The NJAMF transferred ownership of the memorial to the federal government in 2002. The National Park Service has responsibility to maintain the memorial. The NPS cleans the memorial when requested, however due to many demands, the NPS does not clean the memorial on a regular schedule.

NJAMF and JACL have sponsored clean-up programs in the past.