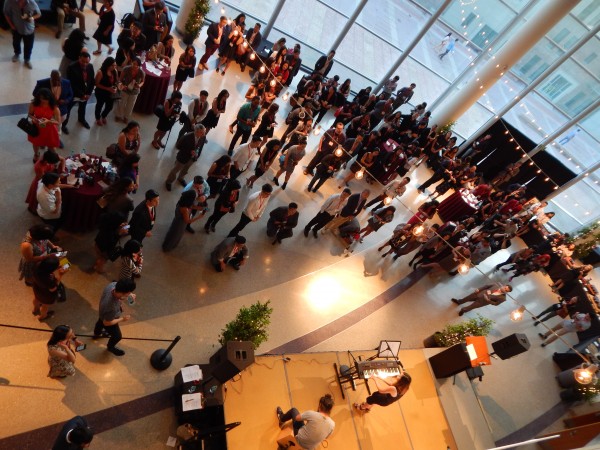 Harnessing Technology For Good At V3

No topic was off boundaries during the digital media conference. 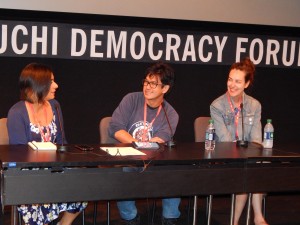 From smart phones to Oculus Rift, no topic was untouched or off boundaries for technies and geeks alike to discuss at the V3 Digital Media Conference (V3con) — all for the purpose of determining resolutions in issues such as breaking the bamboo ceiling as well as working through language and culture barriers. Presented by the Asian American Journalists Assn., Los Angeles, and held at the Japanese American National Museum from June 26-27, the fourth annual conference highlighted conversations of ethnicity and race as well as the power of storytelling and technology in bringing communities together.

The weekend kicked off on Friday with an opening-night reception, with catering by Panda Restaurant Group, Coca-Cola, Kirin and Pop’d Up, as well as a musical performance by Priska, who sang a few of her original songs. 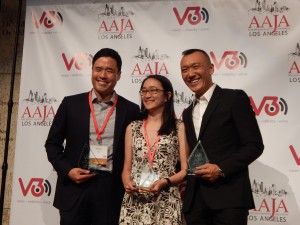 (From left) Randall Park, Dao Nguyen and
Joe Zee accept their awards at the the V3con opening-night reception.

Those in attendance included honorees Dao Nguyen of BuzzFeed, Randall Park of the hit ABC TV show “Fresh Off the Boat” and Joe Zee of Yahoo Style. They were recognized for making a mark in their respective fields, and all three made remarks about their personal journeys in the various areas of entertainment, fashion and online media.

“One thing I feel really lucky about is that I’m able to work at a company like BuzzFeed that truly, truly embraces diversity,” said Nguyen, who discussed the collaborative culture at the company and her experience penning posts such as “27 Signs You Were Raised by Asian Immigrant Parents,” which have garnered millions of views and attracted a global readership. “The more diverse of a workforce that we have at BuzzFeed, the bigger audience that we can attract and the bigger impact that we can have — one of the reasons I think people love coming to the site is that they can learn about other experiences that they may not have had, and it’s part of the reason of our big success.” 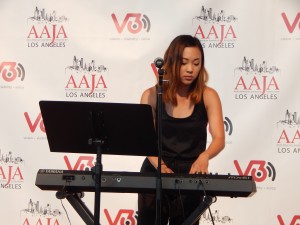 Local celebrities could be seen throughout the audience, including Forrest Wheeler of “Fresh Off the Boat,” David Ono of ABC7 and Richard Lui of MSNBC. After the presentation of awards, attendees had the
opportunity to mingle and take photos with the honorees. Guests also were given gift filled with boxes of Green Tea Pocky and coupons from companies such as Equinox and General Assembly.

On Saturday, hundreds of attendees arrived to take part in the daylong digital media conference. The schedule consisted of a mix of workshops and panels focused on areas like podcasting, live streaming with apps like Periscope, blogging, smartphone photography and comics. Professionals from journalism, social media, community organizations and other industries gathered to share their experience and
visions with like-minded individuals.

One of the panels, “Checking Multiple Boxes: Discussing Being Two ‘Others,’” focused on individuals of multiracial backgrounds, highlighting the intersections of identity, gender and ethnicity. Sonia Smith-Kang of Mixed Up Clothing, Clayton Yeung of Nielsen and riKu Matsuda of the L.A. County Commission on Human Relations served as panelists, while KTLA 5’s Frank Buckley acted as moderator. Many of the speakers noted the importance of joining nonprofits and looking at ways to get a diverse group of voices heard.

“I try to support Japanese American organizations whenever I can,” said Buckley, whose father is Caucasian and mother is Japanese. “In terms of story coverage, every day it’s my job as the gatekeeper, the last guy, to try to make sure we get everything right and not just with regards to diversity.”

Another session featured Patrisse Cullors of #BlackLivesMatter and writer/editor and Pacific Citizen Columnist Gil Asakawa. The two led a dialogue about creating a social movement, providing recommendations for grassroot groups on mobilizing with social media. They also spoke about the importance of building bridges between communities of colors.

“One of the first groups of people to write an open letter about the Black Lives Matter movement was folks in the Asian American community, who wrote a really beautiful letter that essentially said we apologize for not having your backs all those years, and we’re going to do better — it was this beautiful, beautiful statement of solidarity,” said Cullors, who described the work of Asian for Black Lives and other allied groups in Los Angeles.

To Cullors, the Black Lives Matter movement should appeal to a spectrum of individuals.

“We’ve [got to] try to build this conversation as a central conversation for all racial groups, not just black groups because anti-black racism impacts everyone on this planet,” Cullors said. “Until we deal with this issue of anti-black racism, there will still be issues of race and poverty and mass incarceration, war on drugs, and all these things are literally all shaped by anti-black racism. I think our work in a lot of ways is how do we shape the conversation”

Asakawa also chimed in on the importance of building a network that supports these types of issues. “You’re keeping the conversation alive, whereas in the Asian community, there has been hashtag activism, some of it has even gotten some traction like Not Your Asian Sidekick hashtag and Cancel Colbert, which was almost like a jokey one. And they have gotten attention, but they tend to be about the person who started that and it wasn’t something that grew into an organization, a network, a movement, so it’s interesting,” Asakawa said. “I’d love to see something in the Asian community that takes issues of our identity and makes it into something that can be replicated.”

Apart from attending some of the programs, attendees had the opportunity to enter social media bingo, a challenge to tweet images from around the conference. Photos on the V3con social media feed ranged from goofy shots inside the Nielsen photo booth to selfies with V3con steering committee members. With the social media game sponsored by McDonald’s, participants had the opportunity to win an Apple Watch Sport. Charles Lam, a staff writer from the O.C. Weekly, was the lucky winner. He had a positive
experience during the weekend conference.

“V3 was great. You put so many faces to names and meet so many new people. The level to talent hosting panels and just mingling is ridiculous,” Lam said via email. “Anyone who wants to be part of the APA press community should attend.”