Sam Mihara and Peter Simpson are acknowledged for their longtime advocacy efforts at the intimate in-person gathering.

For the last 10 years, Sam Mihara has traveled the country teaching the public about the Japanese American incarceration during which his family lost its home in San Francisco, his grandfather died in a concentration camp and his father went blind.

Now, the theater at the Heart Mountain Interpretive Center in Wyoming bears his name. 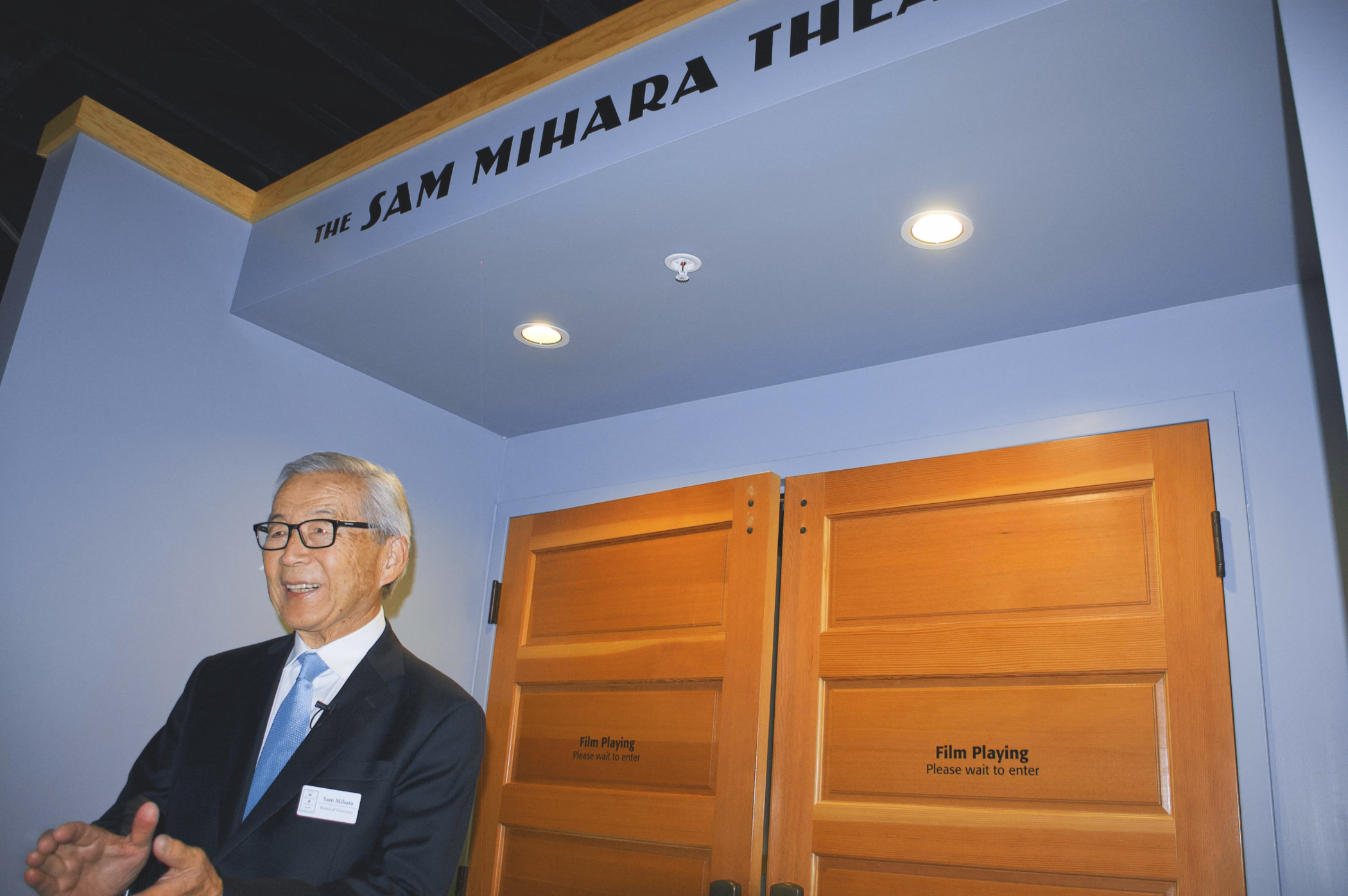 For years, Sam Mihara has been crisscrossing the country, educating thousands of students, teachers and public audiences about the Japanese American incarceration. He also has donated all proceeds to the HMWF to ensure that education continues for future generations. (Photo: Ray Locker)

That honor was presented during the Heart Mountain Wyoming Foundation’s annual pilgrimage during the final weekend in July. The much-anticipated event was held in person for a small group of people and streamed online for others.

It was the first time Heart Mountain incarcerees, their families and the public had gathered for the pilgrimage since 2019, before the Covid-19 pandemic swept the country. 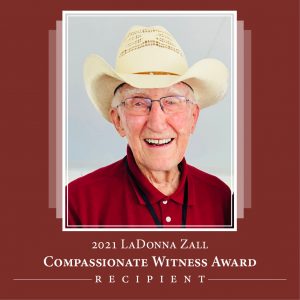 As a child, Simpson was part of a Boy Scout troop from Cody, Wyo., that participated in a jamboree with the incarcerated Heart Mountain scouts in 1943.

That experience helped shape his belief that the Japanese American incarceration was based on racism, not facts. Since then, Simpson has worked to help educate the public through his various roles at the University of Wyoming and on the Heart Mountain Wyoming Foundation board of directors.

Said Dakota Russell, executive director of the Heart Mountain Interpretive Center, of Simpson: “He obviously went in thinking that these were dangerous people that were here behind the barbed wire. He very quickly learned that they were kids just like himself. And so he came to understand fairly quickly that this was unjust, that this was unfair.”

In receiving his award, Simpson, who fondly spoke of Zall and her fierce dedication to Heart Mountain, said, “LaDonna had emotion for this place, and all of us carry it with us, all the incarcerees and their descendants that we know and love, carry this love and emotion as a part of what we do to make sure that nothing like that occurs again. So, here’s to LaDonna, and thank you so much for the best damned award that I ever got.”

Simpson’s younger brother, Alan, was also in that Boy Scout troop. During that jamboree in 1943, Alan Simpson met Norman Mineta, an incarceree from San Jose. They became friends and later served together in Congress, where they worked to pass the 1988 Civil Liberties Act in which the government apologized for the incarceration and paid each surviving incarceree $20,000. 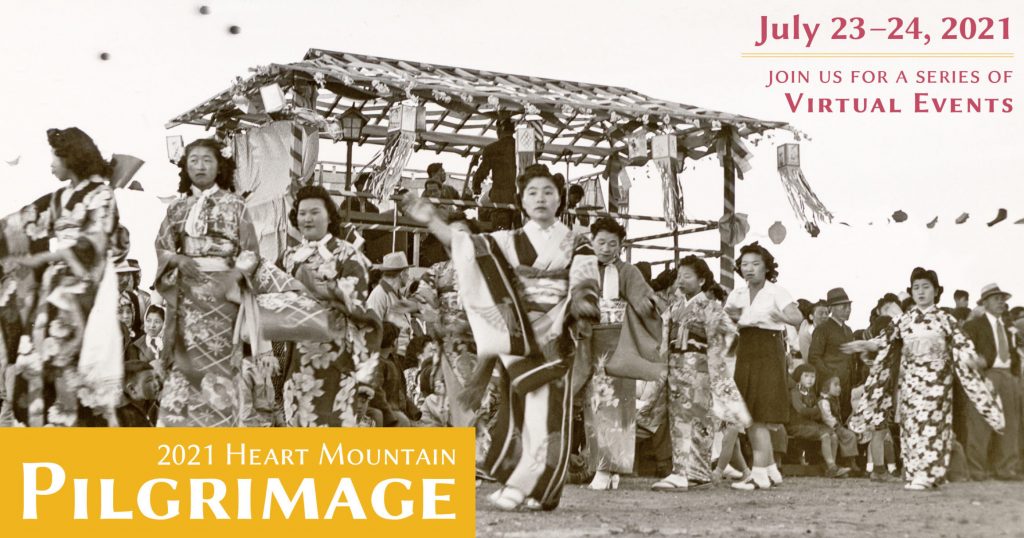 The pilgrimage followed the second of two weeklong workshops for educators the foundation conducted as part of a grant from the National Endowment for the Humanities.

Mihara was a member of the faculty for those workshops. In 2018, he received the Paul A. Gagnon Prize from the National Council for History Education for his work teaching about the incarceration.

In introducing Mihara during the ceremony, Heart Mountain Wyoming Foundation Chair Shirley Ann Higuchi said of Mihara’s years of educating the public about the Japanese American incarceration experience: “He’s preserving not only his own history but the history of my family, of your family and the history of Heart Mountain, which makes it so important today that we are dedicating this theater in his honor. We will continue to work with Sam tirelessly with the teacher workshops … and I have to tell you, his book, ‘Blindsided,’ and his talks brought the teachers to tears. All 72 of them from across the country … moved to tears, and that’s the significance of Sam’s ability to bring the power of place to classrooms and also supporting the power of place here at Heart Mountain. So, thank you very much Sam Mihara.”

During his address, Mihara said, “I’m really grateful, and the lesson learned here is that there is nothing as satisfying as helping people learn about what happened to make sure this hidden history is no longer hidden, and everyone should know and everyone will have a better life and enjoy life better knowing that they’ve helped others, and they’ve helped others in a way of both information and knowledge, as well as money, in order to help make a better life. So, Shirley and the rest of the people, thank you very much. I appreciate the honor and my sincere thanks everyone. Thank you.”

Mihara will be a member of the faculty for next year’s workshops for which Heart Mountain received a second NEH grant.

THE LEGACY OF GRANT BULLTAIL

The pilgrimage began with a July 23 evening event with members of the Apsáalooke (Crow) tribe at the base of Heart Mountain, which was once the heart of Crow country.

Pilgrimage attendees celebrated the life of Crow elder Grant Bulltail at the tribe’s annual Return to Foretop’s Father event at the base of Heart Mountain, which the Crow also called Foretop’s Father.

The foundation also honored the life of LaDonna Zall, the museum’s first curator, who witnessed the final train leaving Heart Mountain on Nov. 10, 1945, as a child living in nearby Powell, Wyo.

A longtime educator in Powell, Zall became the foundation’s first curator shortly after its creation in 1996. For years, she was the only person who could give tours of the site to those interested in exploring the grounds or learning about the foundation.

Zall remained on the board until her death in June and was a constant presence at foundation events.

—Additional Reporting by the Pacific Citizen 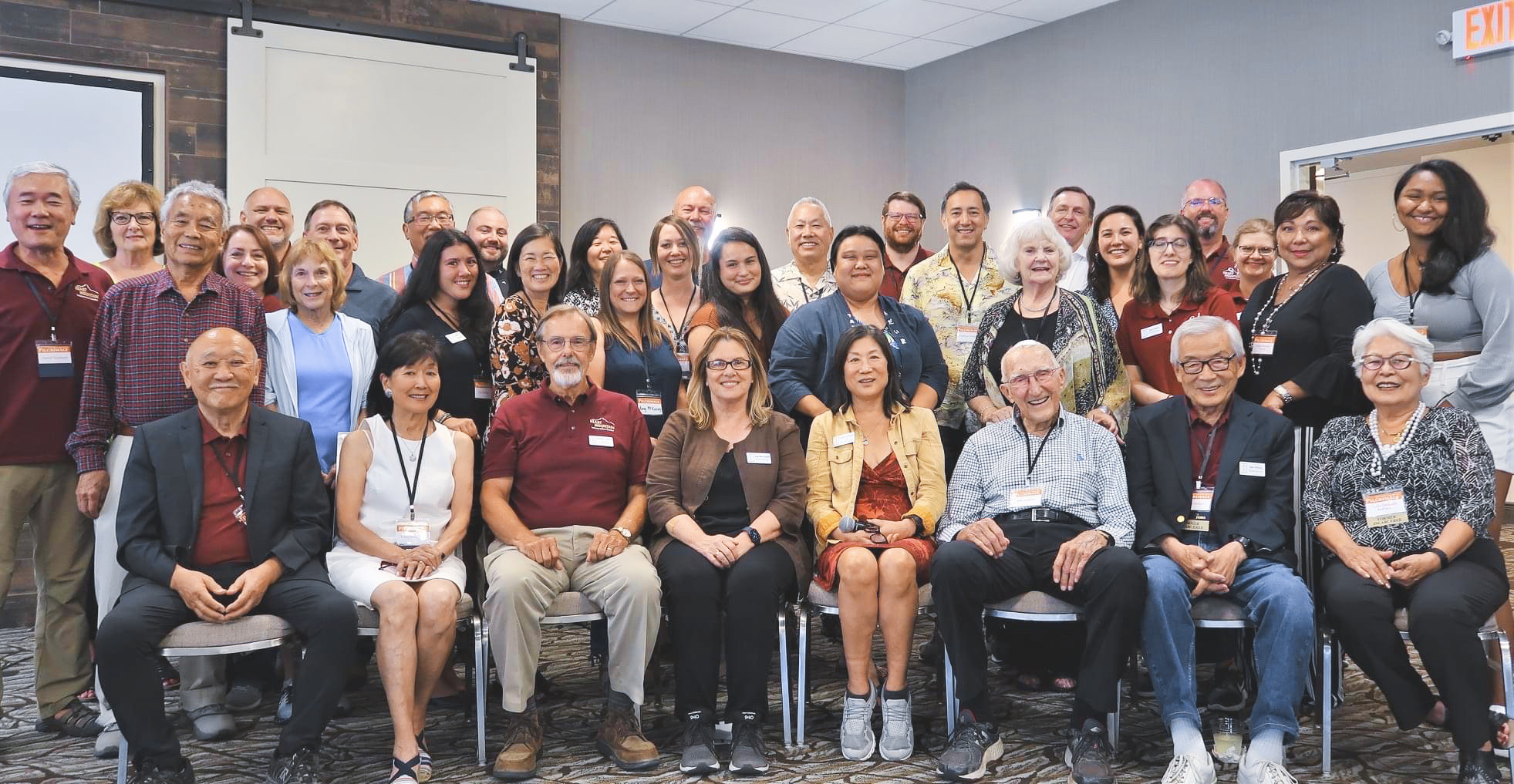