The new center will be built in honor of the two lifelong friends to memorialize their years of dedicated political service. 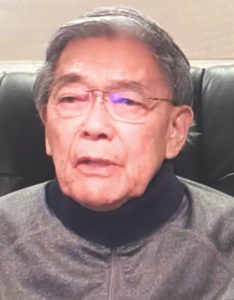 Sec. Norman Mineta recalls when then-President George W. Bush looked at him during a high-level meeting after 9/11 and said that the U.S. wouldn’t do to Middle Easterners what happened to Norm. (Photo: Julie Abo)

Inspired by the example set by Sec. Norman Mineta and Sen. Alan Simpson, the Heart Mountain Wyoming Foundation has announced it will build a new center in their honor at its site near Cody, Wyo.

Shirley Ann Higuchi, the foundation’s board chair, announced the plan in an online forum on Dec. 5 that was held by the Japanese American Citizens League.

“We’re hoping to inspire the community by the work we’ve done at Heart Mountain” and the examples set by Mineta and Simpson, Higuchi said.

Mineta and Simpson joined Higuchi in the event to discuss her new book, “Setsuko’s Secret: Heart Mountain and Legacy of the Japanese American Incarceration.”

The two men met as Boy Scouts in 1943 during a jamboree behind the barbed-wire fencing at the Japanese American camp in Heart Mountain, where Mineta was incarcerated as a child with his family. They stayed in touch with each other over the years and reunited when both were elected to Congress in the 1970s.

“Setsuko’s Secret” is Higuchi’s account of discovering her mother’s deep attachment to Heart Mountain and the history of the Japanese American experience, particularly the wartime incarceration.

“This is a beautiful book, and it’s a beautiful story,” Simpson said about “Setsuko’s Secret.” “But it’s important that we remember it didn’t start today. It started 79 years ago.”

Higuchi said the foundation wants to memorialize the work done by Simpson and Mineta during their political careers. Both men have exemplified the principle that people can disagree without being disagreeable and still help solve many problems facing the country.

When completed, the Mineta Simpson Institute will host events to help bridge political differences and educate people about the Japanese American incarceration and its relevance today. The institute will also generate online programming, books, videos and audio podcasts as well as develop educational exchanges that will spread its message to national and international audiences. 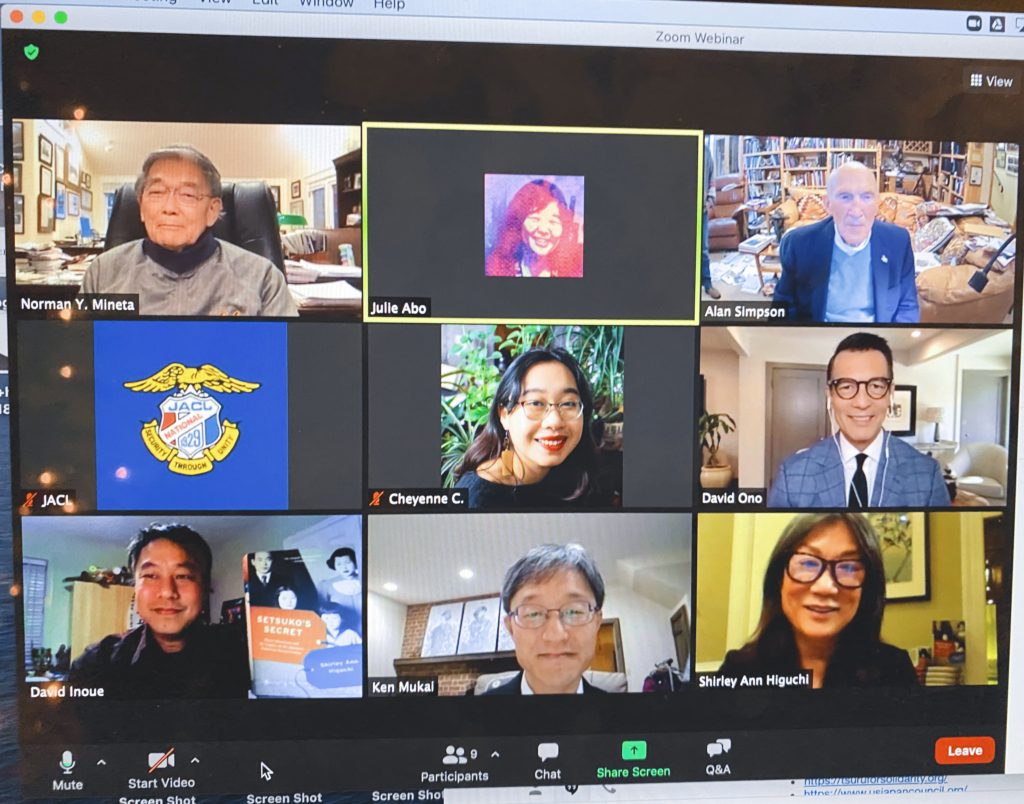 “We don’t see as much collaboration across the aisle for our country,” Higuchi said.

Mineta and Simpson spoke about their collaboration in Congress to pass the 1988 Civil Liberties Act that apologized for the Japanese American incarceration and paid each surviving incarceree $20,000.

Simpson said he had to tell his fellow Republicans that what happened to Japanese Americans during World War II was the result of racism. The United States was at war with Germany and Italy, but Germans and Italians weren’t treated the same way as were the Japanese Americans, two-thirds of whom were U.S. citizens.

Mineta said he was struck in 1942 by the reference to Japanese Americans as “nonaliens.” “I’m not a nonalien, I’m a citizen,” he said. “To this day, I cherish the word citizen because our own government wouldn’t call … us citizens.”

After serving 20 years as a Democrat from California in the U.S. House of Representatives, Mineta returned to government to serve in the cabinets of Presidents Bill Clinton and George W. Bush, a Democrat and a Republican, respectively.

He was Transportation Secretary on Sept. 11, 2001, when Islamic terrorists hijacked and crashed four airliners in New York, Pennsylvania and Washington, D.C.

After the 9/11 attacks, Mineta was with Bush when the president resisted steps to crack down on Muslims in the United States. Bush said he wouldn’t do to Muslims what happened to Mineta and other Japanese Americans during WWII.”

You could have knocked me off my Cabinet chair with a feather when the president said that,” Mineta said.

Mineta and Simpson appear throughout “Setsuko’s Secret.” Mineta grew up in San Jose, Calif., where Higuchi’s father and grandparents lived before and after the war.

Simpson lived in Cody, Wyo., just 14 miles down the road from Heart Mountain. When he first saw the camp with barbed wire, guard towers and machine guns pointed inside, Simpson concluded that the people imprisoned there must be trouble.

Simpson’s father, Milward Simpson, was a frequent visitor to the camp. Higuchi wrote about a meeting Milward Simpson had at Heart Mountain with the Japanese American veterans of World War I, who were imprisoned there.

Much of the book focuses on the effects of the incarceration on the young people who were imprisoned at Heart Mountain and the nine other camps run by the War Relocation Authority. Many incarcerees glossed over that part of their lives, which masked the deeper multigenerational trauma created by their imprisonment.

It was at the 2005 dedication of a walking tour in her mother’s name at Heart Mountain that Higuchi first met Mineta and Simpson, who both added endorsements on the cover of “Setsuko’s Secret.”

The Dec. 5 event was moderated by David Ono, an Emmy Award-winning journalist and evening anchor for TV news station ABC7 in Los Angeles.

Ono praised Mineta and Simpson and called the book a deeply researched exploration of a dark chapter in American history.

“If you think you know a lot about this chapter, read the book — it will teach you so much more,” Ono said.

The event, which attracted viewers from around the country, was sponsored by the JACL, the Japanese American National Museum, U.S.-Japan Council, Tsuru for Solidarity, National Coalition for Racial and Ethnic Fairness in the Courts and the Bar Association of the District of Columbia.