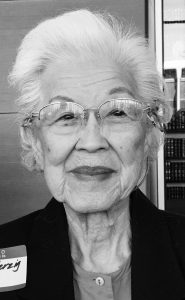 Aiko Herzig-Yoshinaga, whose research at the National Archives led to a fateful discovery that proved instrumental to the success of the Japanese American Redress Movement and in the revival of three Japanese American Supreme Court cases, has died. She was 93.

“The work that she did was key because through her own personal efforts, she found the evidence that our community needed to seek out redress,” said David Kawamoto, an attorney and past national president of the Japanese American Citizens League. “It’s a shock that we lost her.”

Working with her third husband, John “Jack” Herzig, she spent countless hours in the late 1970s and early 1980s delving deep into the National Archives in Washington, D.C., to learn why, how and what the government did during World War II to West Coast Japanese Americans, as well as legal permanent resident Japanese nationals unable to become naturalized citizens, under the guise of military necessity. Her activity in that area came from a gnawing curiosity as to why the government put her family and herself — and Japanese Americans as a group — into camps.

Her expertise and knowledge of what was contained in the National Archives and where to find it led to her being hired as a researcher in 1981 by the Commission on Wartime Relocation and Internment of Civilians.

In 1982, Herzig-Yoshinaga came across the last remaining copy of the original “Final Report on Japanese Evacuation From the West Coast,” which was supposed to have been destroyed. It had been mislabeled.

Unlike the revised version, which based the forced evacuation on military necessity, the original report’s justification for the mass removal of Japanese Americans from the West Coast was actually anti-Japanese racism.

“There was a lot of government innuendo about the necessity of relocating Japanese Americans,” said Kawamoto. “She was able to take the time and effort and find documents that showed that they knew there was no risk from our community. They refer to it as the ‘smoking gun’ that she was able to find hard evidence that there was no justification for the incarceration without any due process.”

So damning was the original report, which was credited to Army Lt. Gen. John L. DeWitt, Assistant Secretary of War John McCloy ordered all 10 copies of the original to be incinerated and replaced with a revised version that justified the removal and incarceration of Japanese Americans for reasons of military necessity. One copy, however, which was discovered by Herzig-Yoshinaga, escaped destruction.

In an essay that appeared in the Jan. 1-13, 2000, issue of the Pacific Citizen, William Hohri, whose National Council on Japanese American Redress attempted to file a class-action lawsuit on behalf of all Japanese American incarcerees, wrote: “Her discovery … demonstrated that the revisions were, in fact, a cover-up; the War Department had cleansed (Lt. Gen. John L.) DeWitt’s original words of their blatant racial bias.” (Aiko Herzig-Yoshinaga and Jack Herzig both worked for NCJAR.)

Born in Sacramento, Calif., in 1924, Herzig-Yoshinaga died on July 18 in Torrance, Calif. In 1941, she was a high school senior in Los Angeles when Imperial Japan’s military attacked Pearl Harbor, the naval base in the then-U.S. territory of Hawaii, which was followed by the United States’ declaration of war on Japan.

Due to President Franklin D. Roosevelt’s Executive Order 9066, as well as a high school principal who vowed that she and her Japanese American classmates would be denied their diplomas because “your people bombed Pearl Harbor,” she did not graduate from Los Angeles High School.

“To be deprived of that diploma was a big blow to us,” Herzig-Yoshinaga said in an oral history. “It was proof that the feeling we had been carrying all that time, that sort of a self-hatred for not being white, showed its ugly face and ugly head at that time.”

Executive Order 9066 would lead to some 120,000 ethnic Japanese — citizens and legal permanent resident aliens then prohibited from becoming naturalized citizens — to be forcibly removed from the U.S. West Coast and imprisoned in 10 government-run “relocation centers.”

“I think our non-Japanese American friends didn’t really know how to treat us. I think they knew that we would be hurt if they ostracized us,” Herzig-Yoshinaga said. “On the other hand, just like our neighbors, I believe that they felt if they were too friendly with us, they would be labeled Jap Lovers.”

Pre-World War II residents of the “Japanese ghetto,” then-known as Uptown or Ue Machi, near what is now Koreatown, Herzig-Yoshinaga’s family would be uprooted to an assembly center and then to the Jerome WRA Center in Arkansas.

“Foolishly, and desperately in love, we eloped,” Herzig-Yoshinaga said, and she married Jake Miyazaki. The newlyweds would have to share their Manzanar barrack with Jake’s older brother and sister and their spouses.

Three months after arriving, she learned she was pregnant. While incarcerated, she gave birth to their daughter, Gerrie Lani Miyazaki, who, it turned out, was allergic to the camp’s powdered milk. “Most infants double their weight at six months. My child had not doubled her weight in a year,” Herzig-Yoshinaga recalled in an oral history. “She was so sick. I was so angry.”

In 1943, she learned that her father, Sanji Yoshinaga, was ill. Herzig-Yoshinaga applied for a transfer to Jerome, which was granted several months later — but while she could bring her daughter, her husband had to stay behind.

In December 1943, she embarked on a harrowing cross-country train trip with her daughter.

“That train trip was a nightmare. I didn’t have a seat reservation, so I had to sit on my suitcase for two of the four days,” said Herzig-Yoshinaga, who recalled her daughter was ill at that time with a respiratory infection. “Fortunately, on the third day, an American soldier took pity on me and let me have his seat.”

Just as she arrived, her father was being rushed to the hospital after suffering a heart attack. While he did meet his granddaughter, he died 10 days later, on Christmas morning. Although Miyazaki would later be allowed to join his wife and their daughter, he would soon be drafted into the Army and sent to Europe. The stress of their circumstances would doom their marriage.

After leaving camp in Arkansas, Herzig-Yoshinaga moved to New York City, divorced and was remarried to Davis Abe, an Army officer. They were transferred to Japan and had two children, David and Lisa, who were born in Kyoto, Japan. They lived in Japan for about five years before returning to the U.S. The couple divorced, and Herzig-Yoshinaga returned to New York City with her three children.

She became involved with a group called Asian Americans for Action, and for the first time began questioning why the federal government locked up Japanese Americans. The seed of her future research at the National Archives was planted.

She married Jack Herzig in 1978, and they moved near Washington, D.C. It was then that she began conducting research at the National Archives — that would prove to be instrumental in the success of the Japanese American Redress Movement, which culminated in the passage of the Civil Liberties Act of 1988 and included monetary compensation to surviving detainees and an apology from the U.S. government.

Herzig-Yoshinaga’s discovery of the original draft of the “Final Report” would also be the fuel to the re-examination of three failed WWII-era Supreme Court cases involving Gordon Hirabayashi, Fred Korematsu and Minoru Yasui.

When legal historian Peter Irons learned that Herzig-Yoshinaga discovered a copy of the original “Final Report,” he reached out to Hirabayashi, Korematsu and Yasui and with a team of attorneys, used an arcane legal procedure, writ of error coram nobis, invoked when a court of law is purposely misled by an action such as prosecutorial misconduct that taints a judicial decision.

The revived cases of Korematsu and Hirabayashi resulted in their WWII-era convictions being vacated. Yasui died in 1986 as his case was pending; a district court had already vacated his conviction in 1983, but his death led to the Ninth Circuit Court of Appeal dismissing his claims of governmental misconduct and the unconstitutionality of his conviction under a curfew law.

“The work that she and Peter Irons did was just invaluable to us, and we can never really thank them enough for what they did,” said Kawamoto.

In a statement issued at the 2018 National JACL Convention in Philadelphia, the JACL said it was “deeply saddened by the passing of Aiko Herzig-Yoshinaga on July 18, 2018.  Her volunteer research at the National Archives uncovered the ‘smoking gun,’ which was the key evidence in the successful coram nobis cases and led to the passage of the Civil Liberties Act of 1988.

“In 1978, Aiko Herzig-Yoshinaga and her husband, Jack Herzig, were researching materials at the National Archives and discovered a government memorandum, which was supposed to have been destroyed. This surviving government document, ‘Final Report on Japanese Evacuation From the West Coast,’ concluded that ethnic Japanese living on the West Coast posed no threat to national security and that there was no military necessity to remove and incarcerate West Coast Japanese Americans.

“The Japanese American community is eternally grateful for the contributions of Aiko Herzig-Yoshinaga to the redress effort.

Herzig-Yoshinaga was the subject of a 2016 documentary by Janice D. Tanaka, “Rebel With a Cause: The Life of Aiko Herzig-Yoshinaga.” She was also honored in April by the Japanese American National Museum with its Award of Excellence. In 1989, she finally received her diploma from Los Angeles High School, thanks to the efforts of her son-in-law, Warren Furutani, who at the time was on the Los Angeles Board of Education.

Herzig-Yoshinaga was predeceased by her husband, Jack Herzig, in 2005. She is survived by her children, Lisa Abe Furutani (Warren), Gerrie Miyazaki and David Abe; a brother, John Yoshinaga (Lucienne), and a sister-in-law, Reiko Yoshinaga. She is also survived by grandchildren Joey Furutani, Sei Furutani (Traci), Laurence Toshiro Moore, David Abe Jr., Kimberly Abe and Lea Krogman, as well as by great-grandchildren Harlee Furutani and Kiyomi Pizarro.