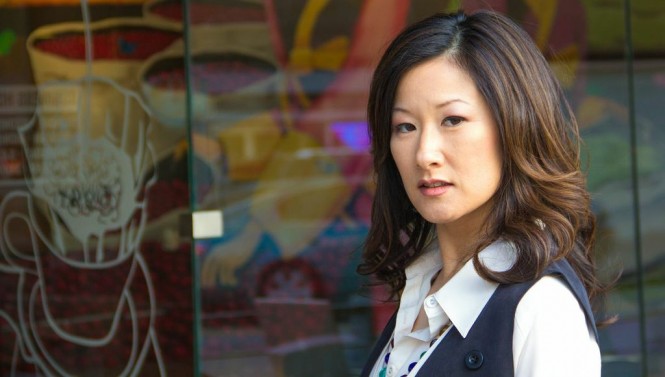 Almost 35 percent of married couples meet online, according to a study by the Proceedings of the National Academy of Sciences. With that statistic in mind, the romantic comedy “Wedding Palace” tackles the issue of modern love and technology in a comedic way. Starring Hye-Jung Kang (2003’s “Oldboy”) and Brian Tee (2006’s “The Fast and the Furious: Tokyo Drift”), the Korea-U.S. independent co-production has gone on to garner awards on the 2013 film festival circuit, including the Golden Angel Award — Best Asian-American Film at the Chinese American Film Festival and the Director’s Award at the Atlanta Korean Film Festival. Director Christine Yoo spoke recently with the Pacific Citizen on her experience making the film and what’s next for “Wedding Palace.”

Pacific Citizen: What made you interested in telling this story?

Christine Yoo: I was just inspired to do it really from my own family experience, I guess. I come from a very large, extended family on both my mother and my father’s side. But particularly from my mom’s side, everyone is really close, and Koreans are usually all up in your business; I wanted to do something that had that feeling. 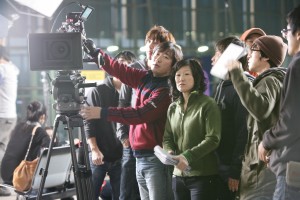 Pacific Citizen: The story is bicoastal, taking place in the United States and Korea. What was the experience like filming in Koreatown in California and Seoul, Korea?

Christine Yoo: Originally in the U.S., I had wanted to shoot in Memphis because that’s actually where I’m from, and the story I felt was always a Memphis story in a lot of ways. But just because of practicality, when you get down to logistics, we filmed in Los Angeles.

I live in Los Angeles with one of the largest Korean American populations. And the story is about a young Korean American man who works in the ad business, and he travels to Korea on business. I felt that that was just something a lot of people do these days, just in terms of being an international or global citizen of the world. I’ve traveled to Korea a lot, and I wanted to do something that was reflective of that experience.

Pacific Citizen: Growing up in Memphis, have you lived in a lot of other cities in the U.S.?

Christine Yoo: I was born in Buffalo, N.Y., actually, and then I did most of my growing up in Iowa City until sixth grade. Then my family moved to Memphis between sixth and seventh grade. I grew up in the South, and when I went to school, I went to a boarding school on the East Coast, just outside of Boston. When I originally was in college, my first couple of years I did in New York and then I ended up getting the film bug and then ended up transferring to USC. I’ve been fortunate to have a lot of experiences in different regions in the U.S. 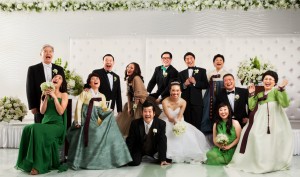 “Wedding Palace” is a romantic comedy that has garnered positive feedback from audiences of all cultures and backgrounds.

Pacific Citizen: And what has the response to the film been like from viewers?

Christine Yoo: Overall, I would have to say it’s been very positive. We’ve actually found that the film has a broader audience than just the Asian American audience. The film had its theatrical release this past fall, and we found that a lot of Hispanics and African-Americans and Caucasians responded to it. We’ve really found a broad audience base, and I think that people have just been responding to the comedy. And I think that everybody can kind of relate to the whole wacky, dysfunctional family thing.

Pacific Citizen: We also saw that there’s a contest happening now until March 14. Winners who submit photos of a viewing party as well as a short essay or short video featuring their thoughts of “Wedding Palace” are eligible to win the grand prize of a $250 iTunes gift card, a Hite Jinor premium gift pack, “A Korean Kitchen” cookbook, a traditional cloth painting and a “Wedding Palace” DVD signed by you. The contest is sponsored by Hit Jinro, the Korea Tourism Organization, Mutual Publishing and GoGo Entertainment. Tell us a little more about the competition.

Christine Yoo: It’s taken this movie a long time — it hasn’t been easy for us to do the film. So, I was really happy that the movie is now being widely seen. One of the ways that the film initially came together was through sponsorships from some Korean companies, so we were excited to have this contest as a way to sort of have fun with the movie’s fans. We’ve been really fortunate that some people have seen the movie twice, and so we just wanted to give something back to the fans, too, and create a fun experience. 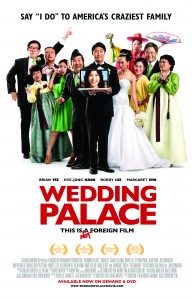 Director Christine Yoo’s latest film was inspired by her own family experience.

Nowadays when people watch movies On Demand or on their iPad, they watch it alone, and this is a movie that I always wanted or I always visualized people watching it together. Hopefully, it’ll encourage people to get together with friends and family to watch it.

Pacific Citizen: Any other comments for your fans?

Christine Yoo: I hope that people watch the film and, also especially for fellow Asian Americans, I really hope that they do continue to support the movie because it’s really very tough to get anything Asian American related off the ground. And if we don’t support what we do, nobody is going to support us. I really encourage people to try to embrace the efforts that artists are putting out there. I was really fortunate that I had an opportunity to work with a lot of supertalented people, and I’m just really excited that I worked with some established actors but I also worked with some new faces that I hope people will come to discover. For me, that was one of the best parts of making the movie.

“Wedding Palace” is now available On Demand, on DVD and online for viewing. Find Wedding Palace on Facebook (https://www.facebook.com/weddingpalaceGO) and Twitter (https://twitter.com/weddingpalacego) for updates. Visit the movie’s official website www.WeddingPalaceMovie.com for more information on the competition.