Now called ‘A Box Without a Bottom,’ the magician offers an apology for the show’s original, racially insensitive name.

Following intense opposition from the Japanese American community, including JACL, regarding the racially insensitive name of his original one-man show, magician David Hirata has made an official change to its title and issued a formal apology.

In a statement released on Nov. 12, Hirata wrote in-depth about his show “The Jap Box” and its new name, “A Box Without a Bottom: Soko-nashi Bako,” saying that he had “simply underestimated the raw pain of the ‘J’ word. The title itself provides insufficient context to justify its use.”

The show, which opened Oct. 26 and runs until Dec. 1 in the Bay Area at the Marsh Berkeley, was written by Hirata, who wanted to highlight the story of Japanese magician Namigoro Sumidagawa, who “dazzled audiences across Victorian America with his exotic stage magic” and his celebrated trick, Soko-nashi Bako, according to the play’s official description. 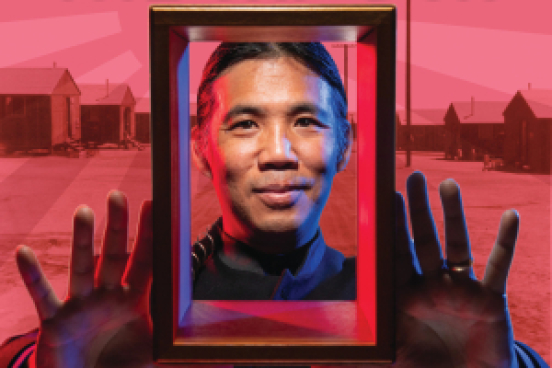 Hirata said he conferred with family members about the original title, and they agreed that the name was “provocative, but that the use of the ‘J’ word in reference to a specific object gave it context. As they had been members of Nisei and Sansei communities during World War II (Mom’s family was incarcerated at the Tule Lake Segregation Center), I valued their input.”

After an initial run in San Diego in 2018, where his show received a positive reception, it has received a much higher-profile run in the Bay Area.

JACL Berkeley chapter board members Karen Kiyo Lowhurst, Tiffany Ikeda and Nancy Ukai immediately sprang into action and attended the show, where they subsequently met with Hirata. The board also wrote a letter to him and Marsh Executive Director Stephanie Wiseman, saying that the show’s name “revives a hateful racist slur that causes deep pain for us and recalls a tragic period within the living memory of our community, when 120,000 Japanese Americans were torn from their homes during WWII because of racial hatred, war hysteria and greed. … By marketing this performance, printing programs, selling tickets online and posting a sandwich board sign in front of the Marsh theater with this slur, you normalize it. … The normalization of this vicious term signals a disturbing lack of regard for our history and our community.”

JACL Executive Director David Inoue also spoke at-length with Hirata, who deeply regretted the pain that his name choice has caused within the Japanese American community.

“While I do believe in the power of confronting ugly history and language through art, the story told by the show is a kind of personal meditation on cultural identity. And, though I have a real connection with the account of the Soko-nashi Bako, the raw pain of the ‘J word’ is not my story to tell,” Hirata wrote. “The pain caused in the Japanese American community by the title was real and something I regret. I felt that making a title change with my apologies was the appropriate action.”

Following a conversation with Inoue on Nov. 13, Hirata confirmed that the theater is reprinting the programs and taking down physical posters, as well as revamping its website to reflect the new name. He also is reconsidering how the word will be used in the show itself, either saying something at the beginning of the performance or putting something in the program.

“This incidence has shown that JACL’s mission of education continues to be important so people understand the legacy of racism against the Japanese American community,” Inoue told the Pacific Citizen. “This one word represents so much of the pain that has been felt by Japanese Americans and Asian Americans throughout history. We can’t allow words like this to regain power through usage in everyday language through normalization.”

Said Berkeley JACL Co-President Elizabeth Uno to the Pacific Citizen, “I am very proud of the quick actions of some of our Berkeley JACL board members, who coordinated their efforts to attend the play and meet with Hirata, write an insightful, thoughtful letter to Hirata and with the leadership of JACL Executive Director David Inoue, were able to successfully get the name of the play changed.”

The name change was immediately met with positive reactions.

“Berkeley JACL chapter done good,” wrote Southern California resident Mitchell Matsumura on Facebook. “They saw a wrong and moved quickly to change it. David Hirata’s magic show has been changed from ‘The Jap Box’ to ‘A Box Without a Bottom.’ This sends a message to all Japanese Americans that the JACL is viable and can work for us in the 21st century.”