The City of Huntington Beach releases its preliminary findings into the Feb. 25 fire that destroyed two structures at the National Treasure site.

HUNTINGTON BEACH, Calif. — An outdoor rally was held on March 19 in support of Historic Wintersburg Preservation and its regional partners, Heritage Museum of Orange County and Preserve Orange County, after preservationists and members of several Asian American community organizations called for a complete investigation into a fire and demolition that took place at Historic Wintersburg on Feb. 25. 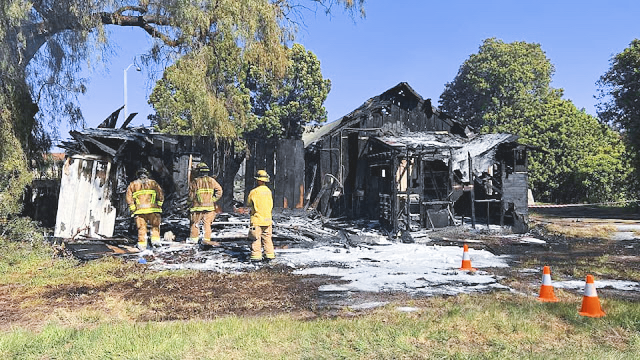 On March 18, the City of Huntington Beach issued a press release that offered a preliminary glimpse into its investigation of the fire, stating “the Huntington Beach Fire Department, in collaboration with the Huntington Beach Police Department, has completed a rigorous investigation into the cause of the fire that took place at the Wintersburg property. … Due to various factors, the HBFD and HBPD have identified two potential causes of the fire but are unable to identify its exact origin. The HBFD and HBPD have no reason to believe the fire was intentionally set. There is no evidence of arson or a hate crime.”

The statement went on to explain that “evidence of personal belongings at the site of the fire indicate at least one individual was possibly living on the property. Through the investigation, the HBPD was able to determine that a local known transient was living nearby and was seen leaving the area shortly after the fire. That individual is not currently a suspect. It is unclear whether this person was involved in the fire or whether the fire may have been caused by someone living on the property. HBPD will continue to investigate this individual’s possible association.

“A second potential cause is due to the Wintersburg property being electrified at the time of the fire,” the statement continued. “After inquiring with Southern California Edison, electricity may have been illegally and dangerously acquired by tapping into a nearby power source, bypassing the electric meter.”

In an update posted on its website on March 24, the Historic Wintersburg Preservation Group stated that the fire investigation is still ongoing and that official reports from the HBFD and HBPD are expected to be completed and released in the coming weeks.

The March 19 rally brought community members together to raise awareness of the ongoing Historic Wintersburg fire investigation, as well as condemn the dramatic rise in anti-Asian hate crimes in Orange County and vandalism at Buddhist temples across the Orange County area.

The City of Huntington Beach statement concluded that it “has been informed by the owners of the Wintersburg property, Republic Services, of its intentions to enhance its security of the site.”