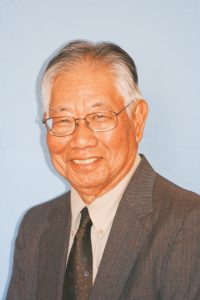 (March 12, 1928-Dec. 3, 2019)
Kajihara, 91, a resident of Camarillo, Calif., was born in Oyster Bay, Wash., to Umeko (Katayama) and Sahichi Kajihara. After Japan’s attack on Pearl Harbor, followed by President Franklin D. Roosevelt’s Executive Order 9066, his parents and he were removed to the Tule Lake WRA Center in California. After his release, Kajihara was accepted at UC Berkeley with the goal of becoming a mathematics professor. Instead, he became an electrical engineer, after which he was drafted into the Army during the Korean War, serving for two years in the Signal Corps at Ft. Monmouth, N.J., later transitioning to the civil service. While on the East Coast, he met his future wife, Itsuko Nishizaka of Coney Island, N.Y., in 1955. After he secured work at the Naval Civil Engineering Laboratories in Port Hueneme, Calif., he and Janet and their two daughters, Claudia and Julia, left the East Coast; third daughter Alicia was born in California. Harry helped change the stereotypical depiction of Asian children in textbooks, became active within the Oxnard Buddhist Temple and later, the JACL. Upon learning in 1982 that the National JACL’s still-nascent redress effort might have to be abandoned due to a lack of funds, Kajihara, as the PSWDC’s redress chair, helped raised $75,000 from 1982-84. After his appointment as the JACL-LEC’s National Fundraising Chair in 1984, he raised nearly $500,000. In 1986, he was elected as national president of the JACL and was immortalized as one of those photographed witnessing President Reagan signing the Civil Liberties Act of 1988 on Aug. 10 of that year. After a 35-year- long career as an electrical engineer, he finally achieved his goal of becoming a math teacher at Ventura College, where he taught for 13 years. Kajihara is survived by his loving wife, Itsuko Janet Kajihara; daughters, Claudia Kajihara, Julia Miyamoto and Alicia Mashiko. He is also survived by sons-in-law, Alan Miyamoto and Kenji Mashiko; and grandchildren, Kevin, Kimberly and Kari Miyamoto, and Richard and Mitchell Mashiko, and by other relatives. His memorial service will be held at 2 p.m. on Jan. 11, 2020, at the Oxnard Buddhist Temple, 250 South “H” St., in Oxnard, Calif. The family requests no flowers.