‘Hold These Truths’ to Make Its International Debut

The acclaimed play is making its debut in Vancouver, B.C.

Compelling, powerful and undeniably moving, Jeanne Sakata’s “Hold These Truths” is a story that stands the test of time. This critically acclaimed play stars Joel de la Fuente (Amazon’s “The Man in the High Castle”) as Gordon Hirabayashi, a U.S. Presidential Medal of Freedom recipient who fought against the forcible removal and mass incarceration of people of Japanese ancestry in America during World War II. 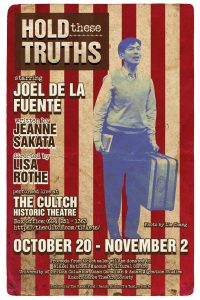 Hirabayashi’s journey, from his time as a young man fighting injustice in America to his final days as an educator and activist in Canada, demonstrates his passion and hunger for freedom, civil and human rights. It is an inspiring quest of what one can do to fight inequality, a tenacious reminder of history and a reflection of how we, too, can change the future if we hold on to these truths.

“Hold These Truths” is making its international debut at the Cultch Historic Theatre in Vancouver, B.C., Canada, under the direction of Lisa Rothe after a celebrated U.S. tour, the latest leg having just concluded in late September at the Barrington Stage Company in Pittsfield, Mass., in a back-by-demand run.

De la Fuente, in addition to his role in “The Man in the High Castle,” has performed in theaters all over the world as both an avid classical theater actor and developer of new work. He is an alumnus of Brown University and the Graduate Acting Program at New York University.

All boxoffice proceeds from the Vancouver performance will be donated to the Nikkei National Museum and Cultural Centre, the University of British Columbia’s Asian Canadian and Asian Migration Studies program and the Kokoro Dance Theatre Society.