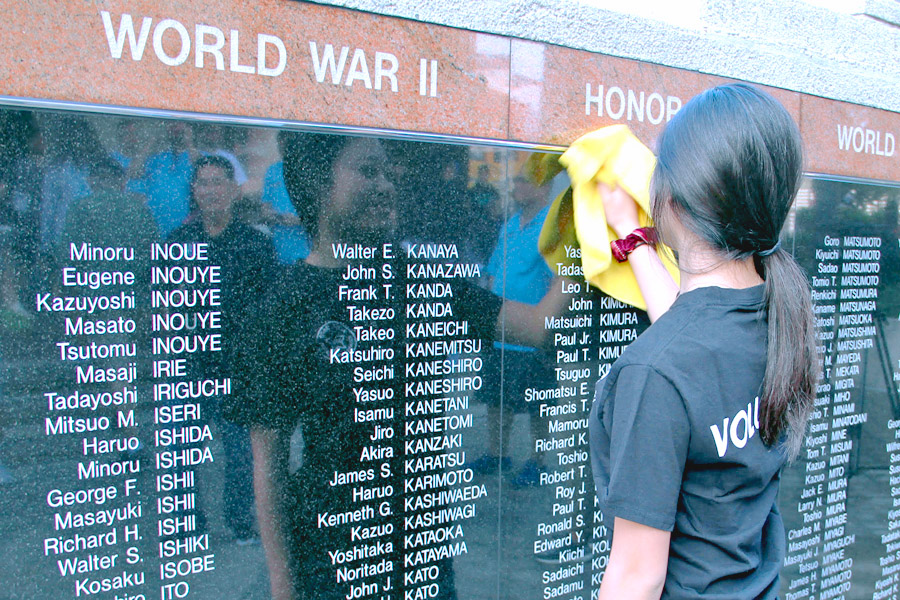 Honoring and Preserving the Memory of Our Fallen Heroes

Following is a reflective essay written by Kiley Murakami, who participated along with fellow youth from the Yonsei Basketball Assn. in the spring event on May 13, as well as the Oct. 28 cleanup.] 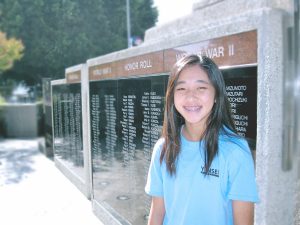 [dropcap]L[/dropcap]ast spring, my friends and I had an opportunity to represent the Yonsei Basketball Association at the annual 2017 Spring “Spit & Polish” event in Los Angeles’ Little Tokyo.

At first, I just thought that we would be helping to clean an important Japanese American Veteran’s Monument outside of the Japanese American Cultural and Community Center. What transpired that day, however, would change the way we look at our lives.

There, we met Ron Yamada, who helped to coordinate this event for us, and he introduced us to Ken Hayashi, a Vietnam War veteran, as well as other Japanese American veterans from World War II, the Korean War, the Vietnam War and the Iraq War. 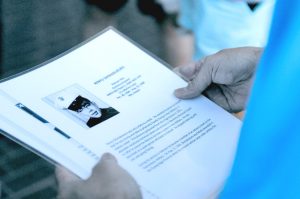 Biographies of fallen veterans memorialized on the tribute wall were given to participants, detailing each soldier’s life and ultimate sacrifice for their country. (Photo: Ron Yamada)

As we assembled in the Memorial Court, Hayashi handed each of us a picture and short biography of a Japanese American veteran whose name was on one of the granite walls. What was striking to us was how young all of the soldiers looked. All the soldiers were only a few years older then we were.

We found the names of the soldiers on the wall, and we stared at them. Some of us touched the names with our hands. It was a solemn moment — we realized that all of the names had faces and stories behind them. Now, cleaning the Memorial Court took on a deeper meaning. 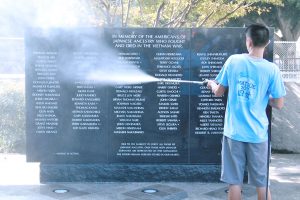 Kole Kikuta powerwashes one of the marble walls at the Japanese American Veteran’s Monument in Little Tokyo on Oct. 28, 2017. (Photo: Robert Horsting)

We followed the direction of Javier from the JACCC, and we power-washed the walls and concrete floors. Then, we hand dried and polished the black-granite monument until it was shiny.

As I passed my cloth over the engraved names, I silently told the fallen veterans, “Everything is all clean now. Thank you for all that you have done, so that I can have the life that I have today.”

I am sure that my Yonsei friends that were furiously polishing the black granite were having the same silent conversations with their parts of the memorial, too.

Next, we gathered at the JACCC for lunch and visitation with some very special Japanese American war veterans.

Jim Yamashita was the first to speak to us. He was a member of the 442nd Regimental Combat Team in World War II. He spoke about some of the names on the Memorial Court wall, and one of the first casualties that he would remember forever. A young Japanese American soldier was hit by enemy fire and called out, “Okaasan, Okaasan,” as he lay wounded.

Min Tonai, a Korean War veteran, spoke of fighting for a country that took his father away from the family for more than three years during WWII. He was also imprisoned along with his family in a concentration camp.

Don Suehiro, a Vietnam War veteran, told us that he understood that we were too young to fully know or understand about the Japanese American involvement in the wars or the camps, but we should. Yes, I thought. We definitely should.

As the meeting wrapped up, I noticed a sense of quiet appreciation on the faces of all the Yonsei players and our parents. It was an emotional and educational afternoon for all of us.

We were there to provide community service to the JACCC by cleaning the Memorial Court, but the special veterans that met with us that day gave us an invaluable lesson on a greater type of community service.

Jim Yamashita and the panel of veterans never complained about their hardships and the prejudice that they and their families had to endure. They never spoke about their personal accomplishments, but instead chose to tell us about the brave soldiers that they fought alongside with and those that lost their lives too early.

Memorial Day has passed and now Veterans Day is coming up soon. I hope all of us will reflect on the way that the Japanese American veterans have touched our lives and have made it possible for us to have the lives that we have today.

Kiley Murakami resides with her parents in La Palma, Calif. She is currently a freshman at Oxford Academy in Cypress, Calif. Along with balancing schoolwork with on-campus activities such as student government, clubs and choir, Murakami also is a Girl Scout and plays basketball. This past summer, she traveled to Shimane, Japan, as a member of the Yonsei Basketball Assn., an experience of a lifetime. 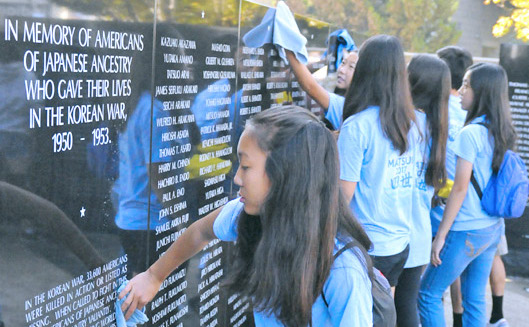