How Are Asian Americans Reacting to the News From Ferguson? 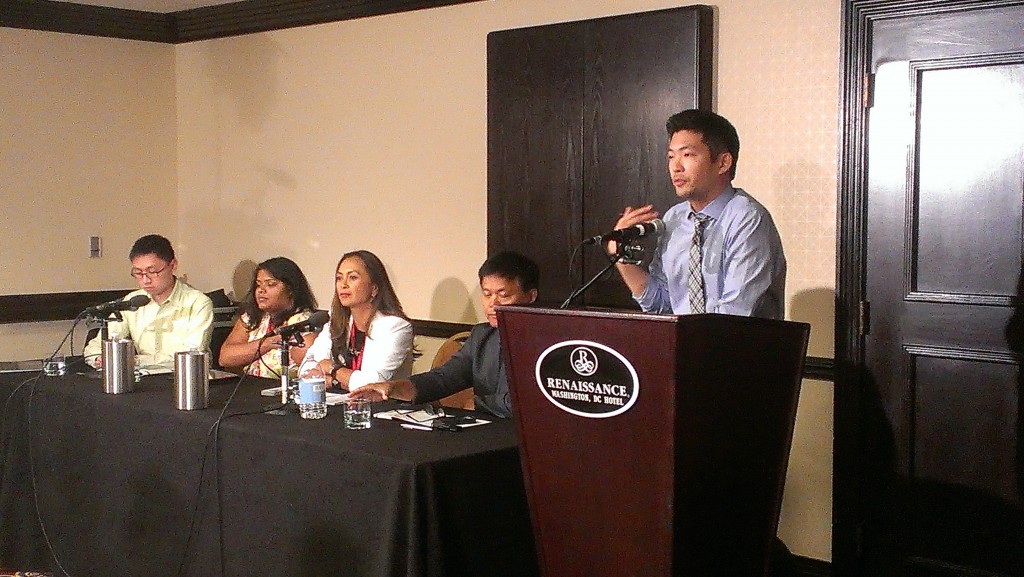 One of the few times Ferguson was mentioned (in passing) was in this panel, “Do Asian American Journalists Have a Stake in Ferguson Story?” Pictured (from left) are Hansi Lo Wang (NPR), Shefali S. Kulkarni (PRI), Ernabel Demillo (CUNY-TV), Emil Guillermo (AALDEF) and moderator Phil Yu (Angry Asian Man). Photo by Gil Asakawa

I just got back from a week in Washington, D.C., attending the Asian American Journalists Assn.’s annual convention. I sat in on a lot of interesting (and some not-so-interesting) sessions about social media and journalism, about why it’s important to cover the Asian American Pacific Islander community, and lots of other current topics in the news.

But one topic was barely mentioned as part of the panel discussions: The death of 18-year-old Michael Brown, an unarmed African American man who was shot by a local police officer in the small town of Ferguson, Mo., a suburb of St. Louis.

He was killed on Aug. 9, and for the next week — during the AAJA convention — the tension in Ferguson between protesters and law enforcement has been front and center in the news.

The scenes during the first nights, when local police showed off their military hardware and went after protesters with tear gas, evoked nothing less than the civil rights era of the early 1960s, the 1968 Democratic Convention in Chicago or anti-war protests on college campuses across the country and the deadly volley of gunfire that killed four students at Kent State University in 1970.

That night led to a brief peace, when the state’s governor assigned state patrol to take over for the overmilitarized local police force. The state troopers are led by an African American Ferguson native who chose a community-based, nonconfrontational approach to calming the neighborhood.

But tensions and violence resumed after a bungled announcement of the name of the police officer who shot Brown, and the next night, the governor announced a curfew. The National Guard was called in.

It’s been a huge ongoing breaking news story, and it’s not over yet.

It’s easy to assume that the original shooting, the heavy-handed military reaction and curfew are racially-based. The suburb of Ferguson is mostly black, but the local police department of 53 officers only includes three black officers. That’s why images from the civil rights struggles —marchers being attacked with water cannons and snarling police dogs — come to mind with little prompting.

These parallels should have all of us, including AAPIs, thinking about the state of race relations in America, both then and now.

But at the AAJA convention, conversations about Ferguson were private conversations among attendees, not on panels. I heard Ferguson mentioned twice, once in a panel about covering the Asian American community and then by Jose Antonio Vargas, the Pulitzer Prize-winning Filipino journalist who’s an undocumented immigrant.

Richard Prince, an African American columnist for the Maynard Institute, an organization for training journalists of color, attended the AAJA convention and wrote a column titled “Do Asian American Journalists Have a Stake in Ferguson Story?” that calls out the lack of reaction to Ferguson.

I don’t have an easy answer why Ferguson wasn’t the official buzz at our convention. The programming was decided months ago, and the organizers weren’t prepared to fold in an all-new topic in an ad hoc fashion; “people here are focusing on jobs and career, and you tend to be in a bubble” at conventions (according to AAJA’s president, Paul Cheung).

But when I think about it, there haven’t been many instances of Asian Americans protesting and marching as a group. Individuals have been involved in political activism — some high-profile Japanese Americans were involved in the civil rights movement, for instance, and marched alongside black leaders (and even with the Black Panthers). There were protests during the era that established Asian American studies in universities. And there were protests after the Vincent Chin murder in 1982, arguably a pivotal moment when an “Asian American” identity came together. But there weren’t mass protests when Japanese Americans were rounded up and sent to concentration camps during World War II.

Maybe our cultural values keep us from such public displays of anger and frustration, until we’re pushed too far.

I wish the speeches at the gala dinner mentioned Ferguson more than just by Vargas. It would have been cool to change a panel on the fly and turn it into a discussion of Ferguson. I hope we as a group didn’t keep quiet because we think this is “not our problem.” I know we don’t.

It would be a real shame if as a community, Asian American accept this injustice meekly, like our own community accepted incarceration.

Gil Asakawa is a member of the Pacific Citizen Editorial Board and the author of “Being Japanese American.” He blogs about Japanese and Asian American issues at www.nikkeiview.com, and he’s on Facebook, Twitter and lots of other social media. He was recently named the 2014 Asian American Journalists Assn. AARP Social Media Fellow.