How Do We Actually #NeverAgainIsNow 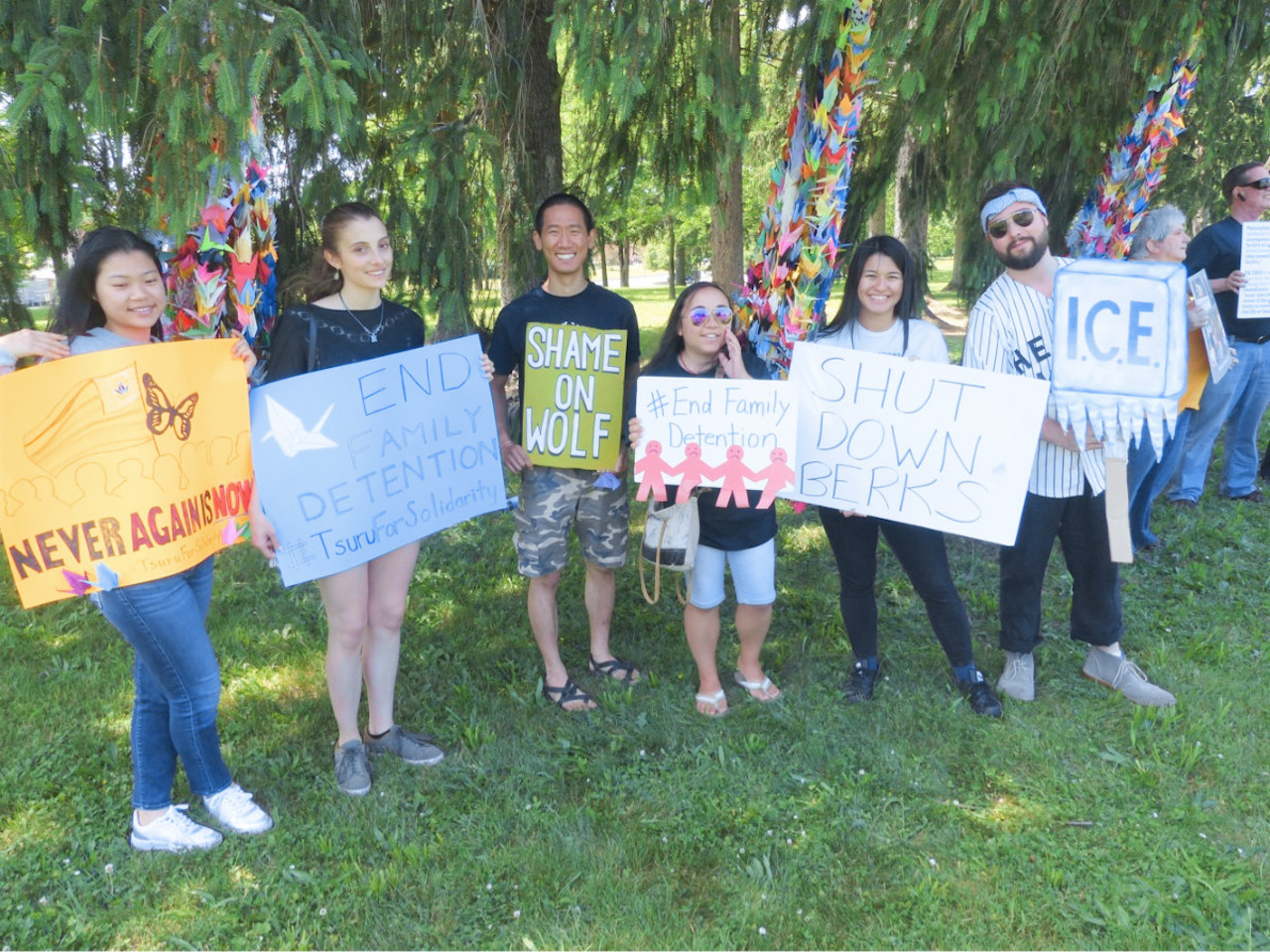 Headlines of Fort Sill and its impending doom as a prison for more than a thousand migrants took the Internet by storm (or maybe just my feed) on June 10. The Army base in Lawton City, Okla., has become a hub of trauma: first the imprisonment of Apaches (including leader Geronimo in 1894), then 700 Japanese Americans during World War II. And now this.

We talk about #NeverAgainIsNow and the importance of history to caution us of mistakes, but we only seem to be repeating the same devil’s march, repeated not to first and second endings but to the next vulnerable people of color. So what does #NeverAgainIsNow actually look like?

Just the day before news of Fort Sill, those of us at JACL Philadelphia had protested the operations of the Berks Family Detention Center in Leesport, Pa., one of three official family detention centers in the U.S.

The sunny Sunday evening of posters reading “Shut Down Berks,” “End Family Detention” and “#TsuruforSolidarity” was a result of months of work in the form of more than 3,000 paper cranes and immeasurable kindness from other organizations and donors.

My engagement with the project started in March.

I wanted to attend the #TsuruforSolidarity protest in Dilley, Texas. It was starkly relevant to my fellowship research on the 2,000-plus Japanese Latin Americans who were abducted from their countries of origin for use in hostage exchanges, then labeled “illegal” aliens by the U.S. government.

It felt like the first time in my amateur activist life that the Japanese American community — young and old — was taking a stance: getting angry and actually doing something; reaching our hands out to a different community in need of help now.

It was then that JACL Philadelphia President Rob Buscher turned my attention to the Berks Family Detention Center in our own backyard.

With the help of Shut Down Berks Coalition and Philadelphia Immigration and Citizenship Coalition, longtime fighters in the movement, I learned that the center holds any number of families (often fluctuates) who are awaiting their asylum case hearings.

Despite having its license revoked, the center continues to operate as an appeal process is underway, and children there continue to grow for as long as two years (this is illegal!) in the center.

While the place is large and may appear to be resourceful from the outside, education is bismal, parent-children dynamics are sabotaged by guards and families are woken up as often as every 30 minutes at night. If the mother’s hunger strikes and the teen calls for preferring death over their living conditions doesn’t signify something to us, I don’t know what would.

In contrast to the cold walls of the center, we took refuge in the warm atmosphere of a JACL member’s house to fold paper cranes. For the first time, I connected with older JACL members in the area, who pampered me with snacks to take home and stories from childhood.

Personally, these folding sessions helped me deal with the dark realities while finding communities and faith in others, a privilege, no doubt. I was also moved by the engagement on the University of Pennsylvania’s campus, the Nationalities Service Center, Quaker Groups, the list goes on.

Paper cranes were also mailed in from outside of Philadelphia, Washington and Salt Lake City. Soon enough, we were stringing together 3,000 cranes to be brought to Berks as a symbol of peace, unity and freedom.

June 9, 2019, arrived in a blink, and our summit, titled “Fighting Mass Imprisonment Through Intergroup Community Activism,” was live. 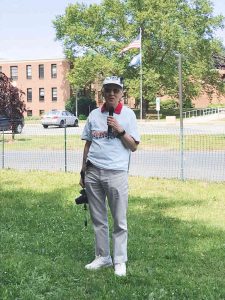 When a group of us JACL members, including Buscher, Hiro Nishikawa and Kaz Uyehara, arrived at the center, there were already six to eight regular protesters awaiting us. They explained cautions around police presence and about the families currently being detained, and they generously welcomed us into the space.

We discussed what to do with the cranes. One woman suggested, “Can we string each family to them and have them fly freely?”

Soon, the cranes were strung up and waving in the wind with the weeping willows (not really, but you get the image), tugging at the many branches, itching to fly free.

Much of the protest included conversation. We shared our personal anecdotes, knowledge of immigration history, our Asian American perspective and were answered with knowledge about Berks and even that of Homestead Detention Center in Florida (protesters are also active there).

“It was sobering to stand in solidarity with the families being detained at the Berks detention center,” said Uyehara. “Our participation in the vigil was a small, but meaningful, act that underscored how we as a community should be doing more to stop and prevent the unjust treatment of families in the United States. The ongoing moral failures of the United States immigration system are a continuation of the jingoism and xenophobia that led to Japanese American incarceration during World War II. This experience reminded me that now we are on the other side of the barbed-wire fence. Any complacency from our community would embody the same apathy that enabled the dehumanization of our families during WWII.”

Nishikawa shared his childhood memories of being forcibly incarcerated during WWII.

“From age 4 thru 7 years, I was incarcerated with my family at Poston Camp 1 during WWII. That experience has made me especially concerned for the children and families incarcerated here at Berks. As my family was comprised of ‘nonaliens’ and charged with no crime, the incarceration was especially insulting,” said Nishikawa. “Most inmates at Berks are seeking survival help as refugees trying to escape death and destruction from their home countries. For human rights reasons, we Americans need to help these people and not treat them like felons.”

Nishikawa also went on to explain the importance of the tsuru hanging from the tree branches.

“As a JACLer who happens to be a longtime Unitarian, I’m especially happy and pleased to see this joint vigil at Berks today. I’ve been here several times in the past few years  with interfaith groups including Unitarians from Reading, Harrisburg, Philly and surrounding regions. But this is the first vigil with the Philly JACL that has brought several thousand hand-folded paper cranes (donated from various JACL groups around the U.S.) as expressions of hope for the detained/incarcerated immigrants and refugees at Berks,” Nishikawa said. “The JACL efforts are enhanced by the guidance of Tonya Wenger and Pat Uribe and others from the Unitarian Church of Reading nearby who have been ‘on-call’ with the inmates/detainees for several years and a driving force to ‘shut down Berks,’”

And Buscher also spoke during the afternoon about his Japanese family’s experiences during the war, and shared his personal thoughts on the heartbreaking situation occurring just across the street from where he stood.

“In all honesty, the vigil experience was a bit disheartening,” said Buscher. “Although we were taking action to show our empathy with the immigrant families, we could not even cross the street to the same side as the detention facility without risking arrest. We never had a chance to interact with the families (although we were not expecting to), and there was no one from the detention facility that we could speak with. It was evident that our actions that day were unlikely to bring about any significant change, but I hope it will inspire more of our local JACL members and other concerned individuals to contact their elected officials and encourage them to shut down Berks for good.” 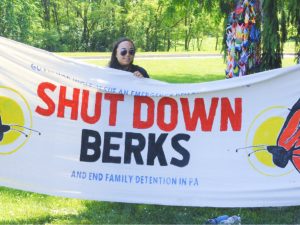 The afternoon for me was a mix of many feelings, but if I could say one thing, the takeaway I got from this intergroup summit was that Japanese Americans must, if we can, speak out and use the power of history, its lessons and our stories to free those currently imprisoned, including the children living day by day in the constraints of the same stone cold walls.

Our history, though unfair and painful for many, can be garnered now as a spear. In perhaps inappropriate, scientific research terms, Japanese Americans and their historical intergenerational experience and trauma can present the answers to a longitudinal study of what could amount from the now of many kids. I will continue to learn, act and fight for the sake of families now.

Isamu “Art” Shibayama passed away last year after an admirable fight for Japanese Latin American reparations stemming from WWII. It is now more than 70 years since the imprisonment that Shibayama suffered.

In 70 years from now, in 2090, I will be 91. Many of the parents now being detained will have passed away. The children will potentially be grandparents. I wonder, “What will they tell their grandchildren about their first days on American soil?”

*Note: Efforts to shut down Berks continue, in monthly vigils and legislative acts. Follow Shut Down Berks for more information. It’s a great organization that continues not only to advocate for the families but also hear and ask what the families would like to see change.