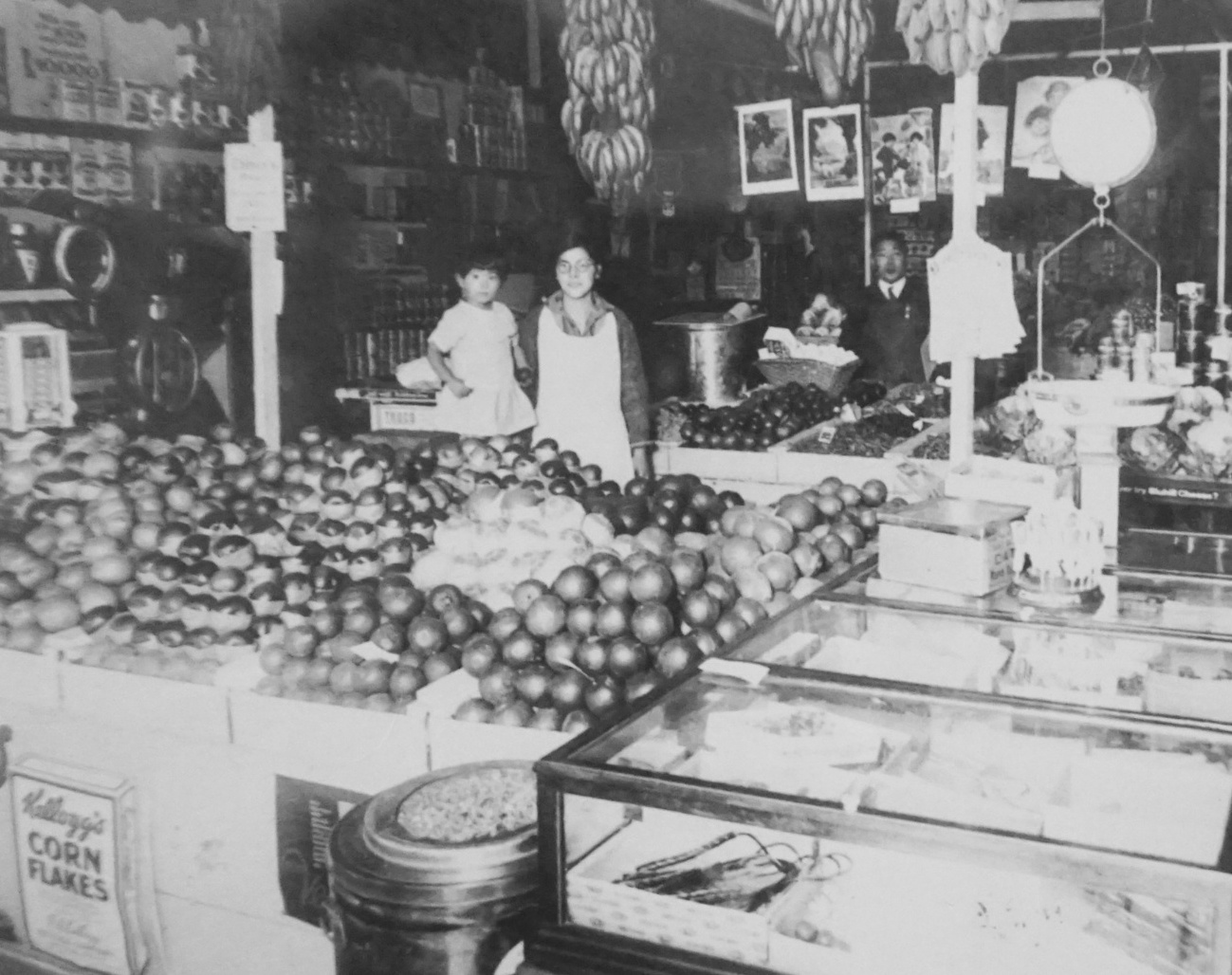 ‘I Am an American’

The ‘I Am an American: Japanese Incarceration in a Time of Fear’ exhibit debuts, and an unknown history is revealed. 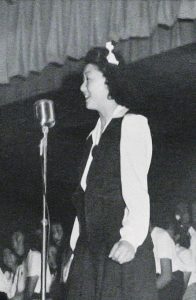 Mary Kageyama Nomura — the Songbird of Manzanar’s singing voice can be heard throughout the exhibit. (Photo: Courtesy of Patti Hirahara)

After a 20-year wait and thousands of hours and money invested in its creation, the “I Am an American: Japanese Incarceration in a Time of Fear” exhibit opened at the Muzeo Museum and Cultural Center in Anaheim, Calif., on Aug. 25. Through its first six weeks, the exhibition has had rave reviews, with more than 2,000 visitors going to see this first-of-its-kind exhibit in Orange County.

This original 5,000-square foot exhibit on the unknown history of Anaheim’s Japanese pioneers and their forced relocation to a Poston, Ariz., incarceration camp from 1942-45 is depicted through a vast array of oral histories, artifacts, photographs and video presentations coordinated by Anaheim Public Library  Heritage Center’s Jane Newell and curator Joyce Franklin.

A partnership with the Anaheim Public Library and the Muzeo Museum and Cultural Center, “I Am an American” presents the story of an amazing testament of courage and determination by Japanese American pioneers and their descendants who came to Anaheim in the early 1900s, establishing farms and businesses in the Orange County community. Anaheim, now the 10th-largest city in California, began in 1857 as a colony of German farmers and vintners.

With no written information available on this unknown story, a group of student interns from Anaheim High School, Chapman University and Magnolia High School used Ancestry.com and other online resources, as well as browsed through reference books in the Anaheim  Heritage Center, to gather information.

Newell, Patricia Grimm, Franklin and myself worked to find information that could be used to write the narratives for the exhibit, with Marlene Shigekawa providing information about the Poston War Relocation Center.

In looking through 1920s phone directories, it was hard to gather information about the Japanese pioneers that lived in Anaheim since many were just listed as “Japanese” with no name associated with the listing. 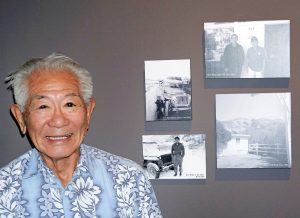 It was also interesting to see what businesses they felt that they could run since Japanese Americans represented a small percentage in the community. They ran a barber shop, fruit and produce stores, the O.K. Grocery store, nurseries, pool halls, restaurants and some became gardeners as an occupation.

The community had an Anaheim Japanese Business Assn., and Los Angeles-based Rafu Shimpo newspaper also once had a branch office in the city.

Anaheim also attracted a Japanese Free  Methodist Church along with a Japanese language school that was originally located where La Palma Park now stands today. The original white church building was relocated to 914 N. Citron St. in 1940, where it still remains; the congregation, however, moved to a brand-new church location on 1001 N. Mayflower St. in 1964.

The only definitive information on these Japanese pioneers was found in U.S. Census records taken in 1910, 1920, 1930 and 1940, which gave a clear indication of how the  Japanese community grew in Anaheim.

An increase in the population from 1930-40, proved that the Japanese American population would have continued to grow if World War II had not occurred.

Another indication of how the Japanese community was present in Anaheim came from information found on those buried in the historic 15-acre Anaheim Cemetery, founded in 1866, which is the county’s oldest public cemetery.

Of these early settlers, 63 were from Anaheim Japanese pioneer families, as well as their descendants who had lived in the area after WWII. The first to be buried there was Joe Ogihara in 1907.

Education was also an important opportunity for these Japanese pioneers, who all wanted their children to go to school. Many of them attended Katella School, which was an elementary school in Anaheim during that period.

There are unfortunately no elementary student records of these early days, but a valedictorian speech was found that was published by Paul T. Hirohata in his book “Orations and Essays,” when he was a U.S. correspondent for the Japan Times newspaper in the 1930s. This finding offered a look at one of the school’s valedictorians, Sakaye Saiki, who gave the valedictory address on June 9, 1932, when she was 15 years old.

The Anaheim High School Japanese American student alumni profiles showed how many students excelled in sports and in class leadership positions. The profiles also showed a Japanese club was established on campus from 1941-42. 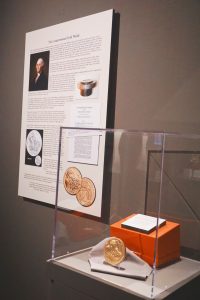 An information panel from the Smithsonian on the Congressional Gold Medal, featuring one on display from the Poston Community Alliance (Photo: Courtesy of Patti Hirahara)

The “I Am an American” exhibit starts with the bombing of Pearl Harbor in 1941 and allows the visitor to see information regarding the Japanese American incarceration through artifacts from the Poston Community Alliance; the Japanese American Historical Society of San Diego; the Munemitsu Family Collection from Chapman University; personal artifacts from Don Miyada, Kristopher Kato and Lorna Hankey Ross; photos of early Anaheim from Mary Okamoto; and a collection of Gene Sogioka watercolors from the Jean La Spina Sogioka Collection.

Panels from the Smithsonian National Museum of American History, the Smithsonian Asian Pacific American Center and the National Veterans Network show the creation of the Congressional Gold Medal along with the history of the 442nd Infantry Regiment and 100th Battalion during WWII.

A large family barrack section re-creation is also a favorite feature of the exhibit, as it shows how Japanese families lived at the Poston War Relocation Center during WWII during their forced incarceration as a result of Executive Order 9066. 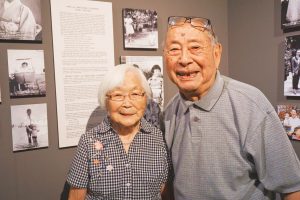 Nakamura was one of the first to record an oral history for the exhibit, and he shared his feelings on the selection process: “The story of the Japanese Americans in Anaheim would not have been realized without Patti Hirahara. She was instrumental in requesting individuals in the Japanese American community to share their stories for the Muzeo Project. 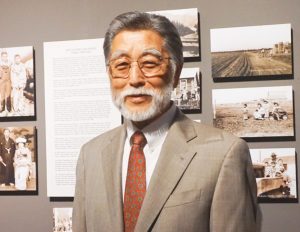 “Jane Newell, Anaheim Public Library Heritage Services manager at the Muzeo, reviewed a book that I had written about my family and felt that their forced relocation experience during World War II was unique and should be shared,” Nakamura continued.

“My parents were among 8,000-plus Japanese Americans who were not incarcerated but nonetheless forced to evacuate. After registering with the Western Defense Command, they began a 700-mile journey across the San Bernardino Mountains, the Mojave Desert and registered their arrival in Utah on March 24, 1942. They survived the bitterly cold winter sleeping on the dirt floor of a converted farm animal shelter.

“The option that my parents chose is not widely known and has received little historical recognition or documentation,” Nakamura said. “Our government recognized this injustice and provided reparation to all who were forced to relocate, and I was honored to have my parents’ story included in the ‘I Am an American’ exhibit,” Nakamura concluded.

Many interviews focus on the unknown history of the Anaheim Japanese families, before and after WWII, as well as their incarceration in Poston. Marlene Shigekawa also produced a short video documentary about the Poston War Relocation Center, which is shown in the exhibit’s little theater. 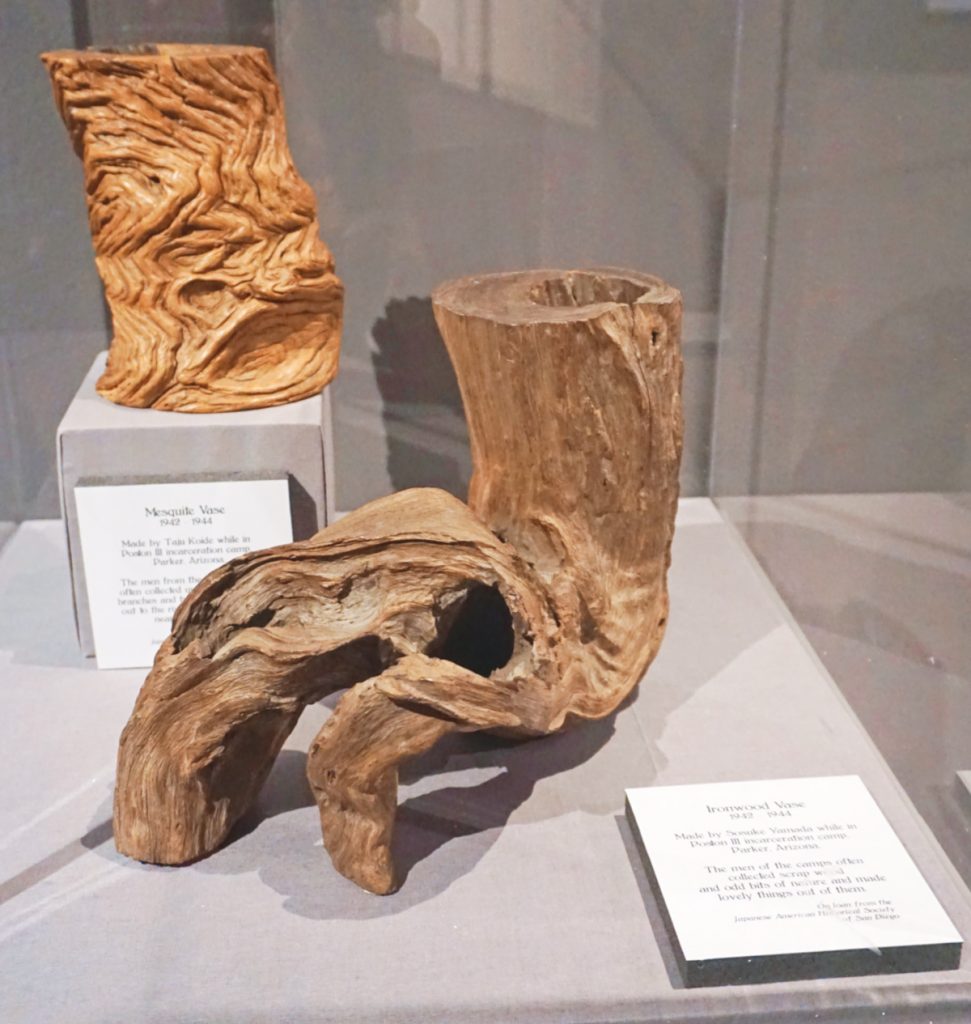 A mesquite and ironwood vase made by Taju Koide and Sosuke Yamada in Poston during WWII. It is on loan from the Japanese American Historical Society of San Diego. (Photo: Courtesy of Patti Hirahara)

The resettlement of Anaheim after WWII showed how the Japanese community found Anaheim an attractive place to do business. From the late 1960s, the City of Anaheim also became the center of Japanese commerce in Orange County with its East West Shopping Center and Pear Tree Center being built within a one-mile area on Ball Road between Dale Street and Beach Boulevard.

In researching the total amount of Japanese and Japanese American businesses in Anaheim, the total came to 47 of those that could be found.

The aerospace boom also made Anaheim an attractive place to live for electrical engineers such as Frank C. Hirahara, who spent his entire career working on projects for America’s space program, becoming personal friends with Astronauts Ellison Onizuka and Sally Ride.

Visitors who have visited the Muzeo exhibit have shared how amazed they are at all the information that is shown in this one exhibit. History teachers have commented that this exhibit is a must see for high school students, with hopes that the “I Am an American” exhibit could become a traveling exhibit to be shared in other cities in Orange County and throughout Southern California.

With the exhibit being scheduled to  close on Nov. 3, the Muzeo will be open from Wednesday-Sunday from 10 a.m.-5 p.m. for the remainder of the exhibit’s run. Group tours of 15 persons or more can receive a 15 percent discount off the entrance fee and can be booked by contacting Baggio Ardon, guest services manager, at (714) 765-6455. For more information, visit www.muzeo.org.

In seeing how this exhibit has been received, it is truly gratifying to see how one project, 20 years ago, was the spark that started the preservation of the Japanese American legacy in Anaheim. I know all of us that live in Anaheim are proud of this endeavor and hope more people will come and see this exhibit to learn the important part Japanese American history played in the success and growth  of this vibrant city that so many of us call  home. 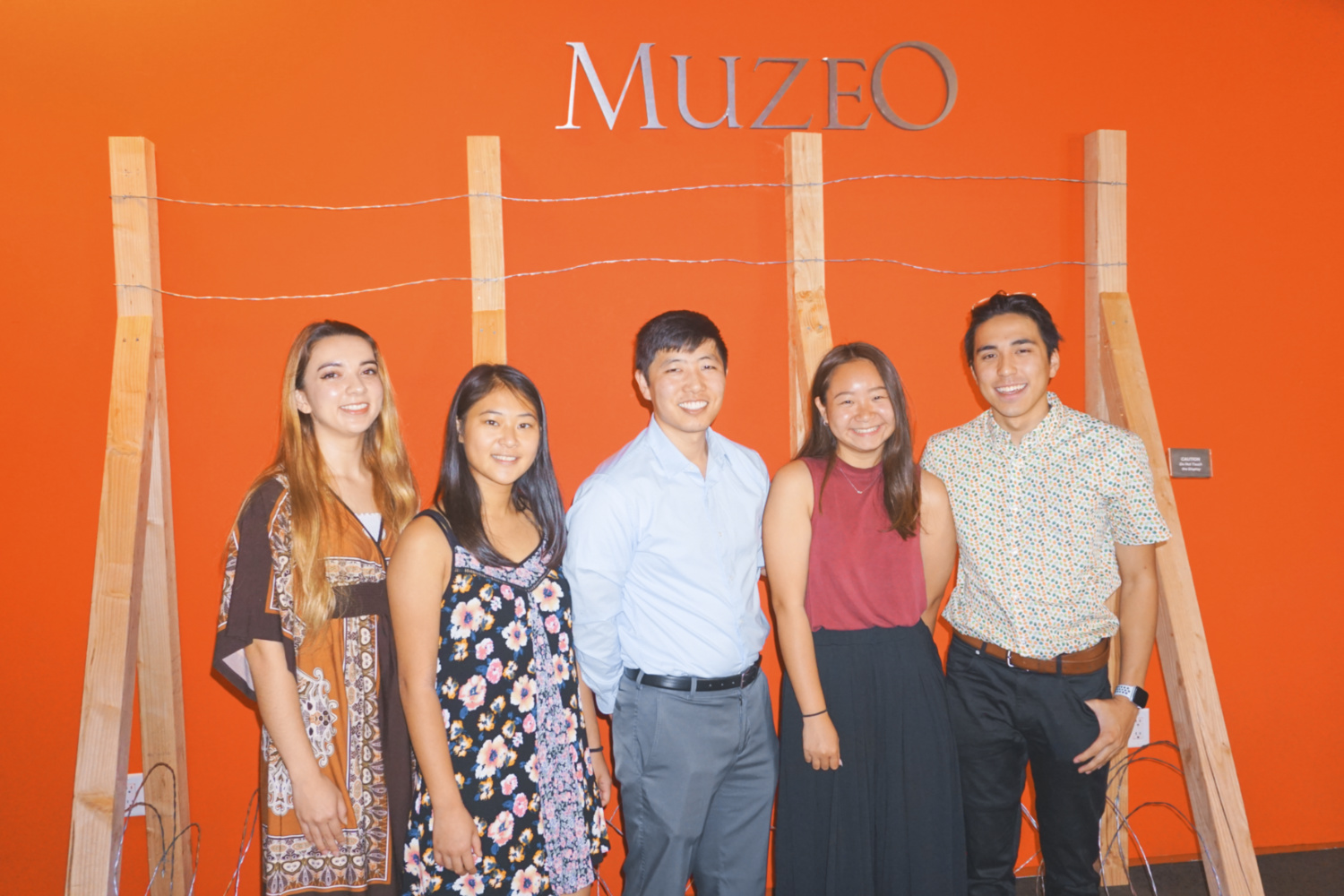 SELANOCO JACL President Ryan Yoshikawa (center) and friends at the Muzeo exhibit. SELANOCO is a supporter of the exhibit. (Photo: Courtesy of Patti Hirahara)