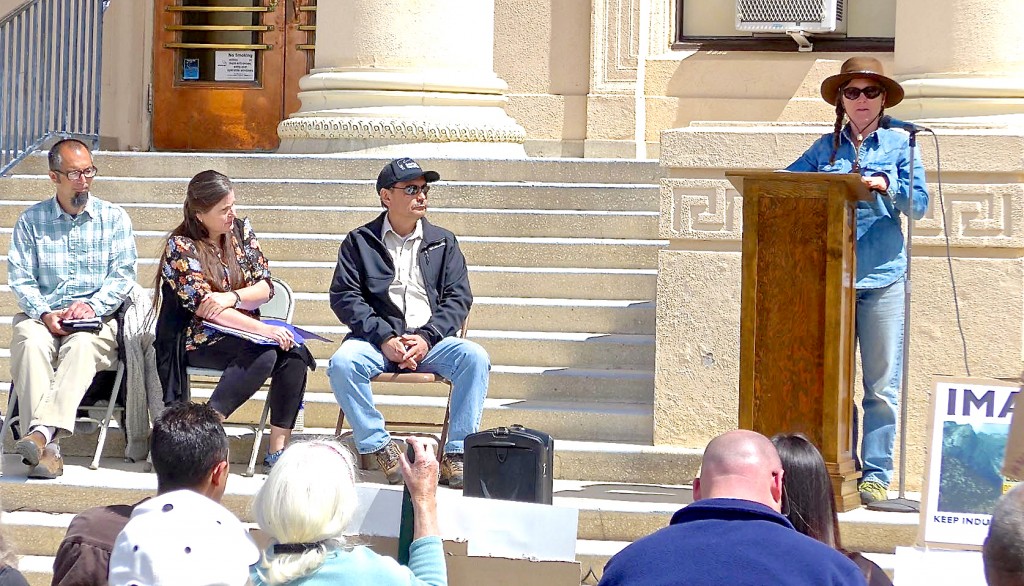 INDEPENDENCE AND LOS ANGELES, CA — A broad array of groups working to protect the Owens Valley and the Manzanar National Historic Site from being devastated by large-scale renewable energy development urged caution and continued vigilance on April 4 in spite of actions by the Inyo County Board of Supervisors and Planning Department that appeared to remove the Owens Valley from consideration as a area where such development would be allowed.

At a meeting of the Board of Supervisors on April 1, County Planning Department staff presented a revised Renewable Energy General Plan Amendment (REGPA) proposal that did not include the Owens Valley as a Renewable Energy Development Area (REDA).

“The Planning Department presented a new alternative to the Board of Supervisors that they called ‘Less, Less Intensive,’ which removed the Centennial Flat/Darwin and Owens Valley REDA’s,” said Alan Bacock, Water Program Coordinator for the Big Pine Paiute Tribe of the Owens Valley. “But even though the Owens Valley REDA was erased from the map, it continues to exist. The location is no longer defined, but it now includes all areas within the Owens Valley.”

“The Los Angeles Department of Water and Power’s proposed Southern Owens Valley Solar Ranch and the Owens Valley REDA are definitely not off the table, as they are now going to be studied in conjunction with the latest $400,000 California Energy Commission grant that was just awarded to Inyo County,” said Mary Roper, president of the Owens Valley Committee. “There was an assumption on the part of the public, not based on any action that was taken at this board meeting, that this ‘Less Less Intensive’ REDA map was the one that was going to go forward. This is not the case at all.”

Manzanar Committee Co-Chair Bruce Embrey noted that the Board of Supervisors took public input into account, but he also indicated that the fight against large-scale renewable energy development in the Owens Valley, especially within the viewshed of the Manzanar National Historic Site, must continue.

“The Inyo County Planning Department suggested some criteria to add to the REGPA to determine whether a solar project should be built, including mitigating impacts to the culture and economy and to avoid significant alterations to the viewshed of Owens Valley,” he said. “These are important considerations. But while the Manzanar Committee appreciates the Board of Supervisors taking our concerns seriously, no firm decision was made.

“We intend to remain vigilant, continue to organize against the LADWP’s plans for the SOVSR and push for distributed solar energy projects in Los Angeles and in the Owens Valley so there will be no need for large-scale industrial solar projects that would destroy the viewshed of the Manzanar National Historic Site,” Embrey added.

Indeed, the LADWP’s Southern Owens Valley Solar Ranch remains on the drawing board as well as the negotiating table.

“The term sheet and Memorandum of Understanding for the SOVSR is still out there, and the LADWP accepted the board’s invitation to discuss it,” Roper noted.

The public is urged to closely follow the actions of the Inyo County Board of Supervisors and Planning Department in the weeks and months ahead.

“We are not done with this fight,” Roper emphasized. “Check the board agendas every Thursday night or Friday because there are going to be items that slip in under our radar. There are several supervisors who seem determined to continue on with the SOVSR and the Owens Valley REDA, no matter if it isn’t pictured on the ‘Less Less Intensive’ map. Also, keep an eye on anything that has to do with electrical transmission. That is really the key as to what extent Inyo County can be industrialized.”

“It is important to note that the activities conducted on April 1 showed that county staff and the Board of Supervisors are listening and responding to the concerns of the public, but this is not the end of the discussion,” Bacock warned. “Inyo County is still in preliminary evaluations of the REGPA, and no decision has been made to actually choose any of the alternatives that have been presented. The ‘Less, Less Intensive’ alternative is a good step forward, but there are still questions that remain.

“The movement to save Inyo County from industrial renewable energy projects should not end because of the newly proposed alternative in the REGPA,” Bacock added. “We are in a marathon, not a sprint.”