Is Fake Belly Dancing a Form of Cultural Appropriation? 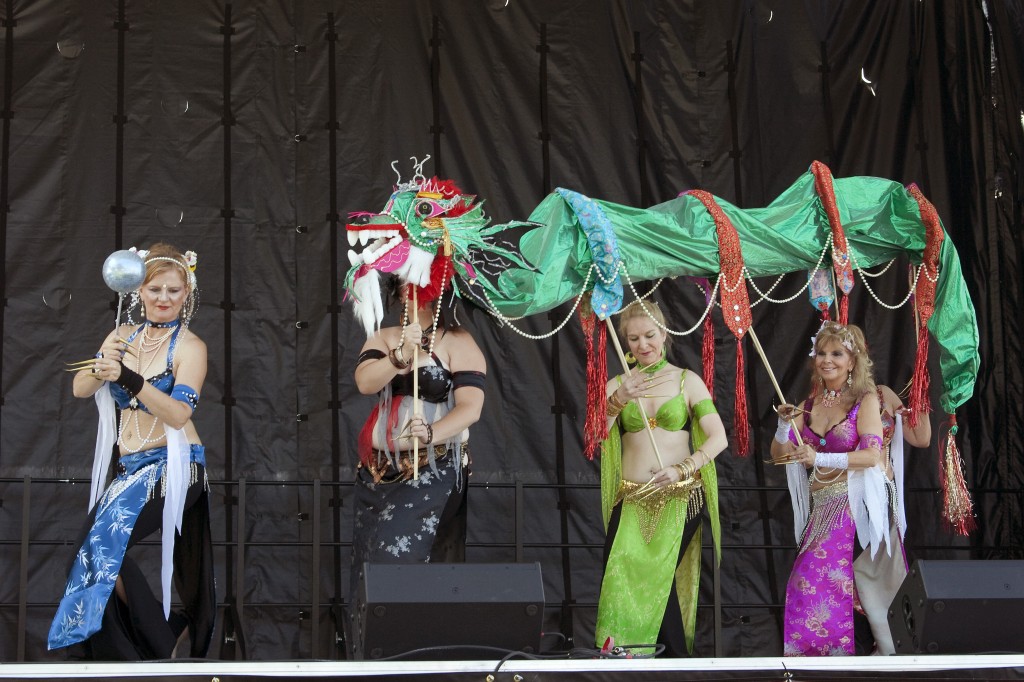 This group performed at a Denver festival and claimed it was paying homage to Chinese dragon dancing at the same time it was performing a Middle Eastern belly dance. Photo by Gil Asakawa

I read with interest a recent Salon(ITAL) commentary by novelist Randa Jarrar provocatively titled “Why I Can’t Stand White Belly Dancers.” She made the point that the popularity of “belly dancing” in the U.S. often has nothing to do with the rich cultural heritage that “Eastern Dance” has in the Middle East, where she grew up. She notes the origins of American belly dancing in 1890s “side-show sheikhs” with their harems of exotic dancers.

This history of Arabic cultural appropriation has similar historic parallels in the use of blackface minstrelsy and the introduction of Asian images in the American pop culture of the late 1800s and early 1900s. By today’s standards, Al Jolson singing “Mammy” or the ghastly fake-Japanese of Gilbert and Sullivan’s “The Mikado” seem ludicrous, but they were common ways that Asians and blacks were portrayed more than a century ago.

You’d think we’ve progressed – and we have, in many ways. But think back just a few months ago to the American Music Awards and Katy Perry’s ghastly faux-Orientalist performance that featured the proverbial everything-including-the-kitchen-sink array of props that signaled “Japan” and “The Orient” without actually being authentic Japanese or Asian. Just imitation Asian, like the imitation Middle Eastern exoticism of belly dancing.

In recent years, a similar discussion has gone on around the origins and current state of yoga, and how far Westerners have taken it from its Hindu spiritual roots to a mere healthy-living fad.

A couple of days after Jarrar’s opinion piece, a response essay came from a white attorney, Eugene Volokh, who blogs for the Washington Post(ITAL).

His equally provocatively titled piece, “What Would Salon Think of an Article Called, ‘Why I Can’t Stand Asian Musicians Who Play Beethoven’?” reminded me that people — even smart people — don’t get it. Although I don’t think he’s racist, Volokh is reducing the legitimate cultural concerns of people of color down to a black-or-white, all-or-nothing argument that makes people of color the bad guys for pointing out these obvious cultural appropriations.

Volokh’s argument, of course, is that if belly dancing by white people is bad, so must be Asians playing European classical music. It’s a specious point to hide behind, as if world-class Asian musicians who play Beethoven or Bartok are practicing in simple cultural appropriation.

That’s a position he can afford to take because he’s been blessed all his life with what’s called “white privilege.”

Wikipedia explains white privilege thus: “The term denotes both obvious and less obvious unspoken advantages that white persons may not recognize they have, which distinguishes it from overt bias or prejudice. These include cultural affirmations of one’s own worth; presumed greater social status; and freedom to move, buy, work, play and speak freely. The concept of white privilege also implies the right to assume the universality of one’s own experiences, marking others as different or exceptional while perceiving oneself as normal. It can be compared to and/or combined with the concept of male privilege.”

Most people of color that I know are familiar with this concept — even older JAs who may not be so interested in stirring the pot and complaining about such social inequities. Too many of the white people I know unfortunately don’t know the term and deny the concept.

Volokh’s response was underscored by a bunch of comments, most of which agreed with him and disparaged Jarrar.

I’m not as much a hard-liner as Jarrar. I’ve known too many white Japanophiles who speak better Nihongo(ITAL) than me, who have learned Japanese dancing and music, or folk arts, or cooking, or martial arts, from authentic traditional masters. I don’t think these people are misappropriating our culture — my culture — for their own ends or show a phony appreciation for Japan or Asia.

There’s a level of respect that allows cultures to spread from one geopolitical time and place to others. And in this shrinking, connected world we live in, the spread of cultures happens even faster than ever before.

So I’m OK with teenaged fans putting on a bathrobe and thinking they’re paying homage to their favorite anime as if they’re wearing a real kimono. But I do acknowledge that level of objectification is just scratching the surface and is not real. When that fan goes on to study Japanese in college and serves as a bridge for Japanese culture and commerce as an adult, I’ll know that her teenaged obsession was real and respectful.

For now, I can put up with seeing her and her friends at the Cherry Blossom Festival, and I’ll roll my eyes and put up with bad belly dancing palmed off as the “real thing” at a Middle Eastern restaurant.