The National Board vows to work in the organization’s best interests to promote growth across all sectors under the leadership of new ED David Inoue.

All hands on deck. That’s exactly what it is going to take to ensure the longevity of the JACL, as the National Board convened with chapter delegates and member attendees to discuss the future of the organization at its 48th annual National Convention, which was held July 6-9 in Washington, D.C. 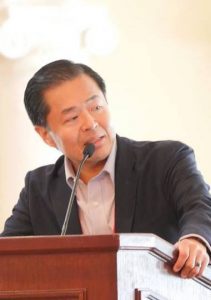 It was fitting that the convention’s theme, “Our Story: Resilience, Remembrance, Resolve,” echoed throughout the historic ballrooms of the Omni Shoreham Hotel, which has numerous tales of its own, having hosted every presidential inaugural ball since President Franklin D. Roosevelt.

JACL National President Gary Mayeda began the National Council meeting on July 7 with the announcement of a special resolution, passed by the JACL National Board, recognizing the career and community achievements of former U.S. Representative Mike Honda, who served in Congress from 2001-17.

On behalf of the board, Mayeda thanked Honda for “all of the different contributions he has done for the community, JACL in particular, and every single group and people that he has touched through the years.”

JACL Associate Executive Director Stephanie Nitahara then summarized JACL’s achievements in 2016, stating that “this year has been a big year for us … a year of a lot of transition, but looking at all of the programs, it has been an incredible year.”

Among the many highlights were the Civil Liberties in Times of Crisis: The Japanese American Incarceration program, sponsored by the National Endowment for the Humanities. As a result of a $155,000 grant, 72 teachers from all across the nation traveled to Los Angeles to learn more about the incarceration experience and redress. The program was facilitated by Sharon Ishii-Jordan, Greg Marutani and Bill Yoshino.

“We really need to get more information about the incarceration out to the people who educate our young people and teach them in a way that we want this story to be told so that it’s not told for us by the one paragraph in textbooks that the students are given,” Nitahara said.

Other successes included the Smithsonian National Museum of American History’s “Righting a Wrong: Japanese Americans and World War II” exhibit, which has been extended through December, and the Kakehashi Project, which allowed 182 youth participants to visit Tokyo and various parts of Japan.

Nitahara also thanked the JACL National Staff, the D.C. convention committee led by John Tobe, as well as the countless volunteers who worked to ensure the success of the convention, and she expressed her enthusiasm for the future of JACL.

“I’ve really enjoyed my time serving as the interim executive director, and I’m excited to welcome David (Inoue) and get this new era going,” she said.

“In the vein of the theme of this conference, ‘Our Stories,’ I do really want to hear from you and hear what your stories are, and why the JACL is important to you. Because this is our organization, this is your organization, and I’m here to work for you — work for all of us,” Inoue said.

The National Youth/Student Council and its youth members clearly play an important role in ensuring the longevity of the JACL.

NY/SC Chair Kota Mizutani reiterated that notion, summarizing that the NY/SC is actively working on its mentorship program and intent to build District Youth Ports to engage JACL chapters with their youth.

“This report is a unique opportunity to share our vision and talk more about what we want to do about the broader scheme of things. We are often asked, ‘Where are the youth?’ They’re right in front of you. They are in your communities. All it takes is listening, and that’s something the NY/SC is really focusing on,” Mizutani said. “We are not only the leaders of tomorrow, we are also the leaders of today. We have concerns, and we are active, and all it takes is listening to hear the issues that we want to focus on.”

Membership coordinator Mariko Fujimoto reported that year-end 2015-16, there was a 2 percent decrease in membership; currently, there are 101 JACL chapters and 9,180 memberships. She also announced the appointment of new VP of Membership Haruka Roudebush.

“Our membership is really the cornerstone and vitality of this organization, and I look forward to working with all of the chapters and districts to find ways to reinvigorate our membership base,” Roudebush said. “We must give them a sense of pride of being part of our great organization. There is a lot of hope out there. I find that really encouraging. … We must find ways to communicate that to the general public as well.” 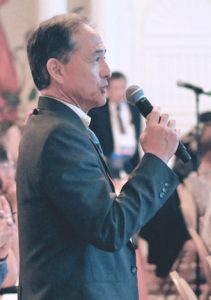 And in his financial report, Treasurer Alan Nishi outlined 2016 budget highlights, which included cutting the organization’s $202K deficit in half to $101K at the fiscal year end. Nishi also reiterated the need for accurate budget revenue projections and strict adherence to the approved budget.

“We have to definitely adhere to the budget. Budgetary diligence is going to be needed, and that’s one of my top priorities,” Nishi said.

In addition, Nishi addressed concerns related to the P.C.’s budget and how National JACL will be working with P.C. staff to unify accounting systems to eliminate disparities in reporting figures. To help Nishi, the JACL has created a Financial Oversight Committee, led by former JACL National President Larry Oda, which will work with all programs across the board.

The eight resolutions passed by the National Council at convention:

• R2: A resolution condemning de facto and de jure religious and racial prejudice in asylum policies of the United States of America

• R3: A resolution relating to the marginalization of Native American peoples regarding the Dakota Access Pipeline on Standing Rock Sioux Tribal Land

• R4: A resolution in support of maintaining JACL’s presence as a national organization

• R5: A resolution relating to the Wakamatsu Tea and Silk Colony, the first Japanese colony in North America

• ER-1: A resolution relating to the Amache Preservation Society’s application to the U.S. Department of the Interior to designate the Amache Incarceration Camp as a National Historic Site

• ER-2: A resolution relating to the preservation of the Snoqualmie Falls Lumber Company (SFLCo) site, where Japanese workers harvested and milled timber and helped build forest rail lines from 1917 until 1942.