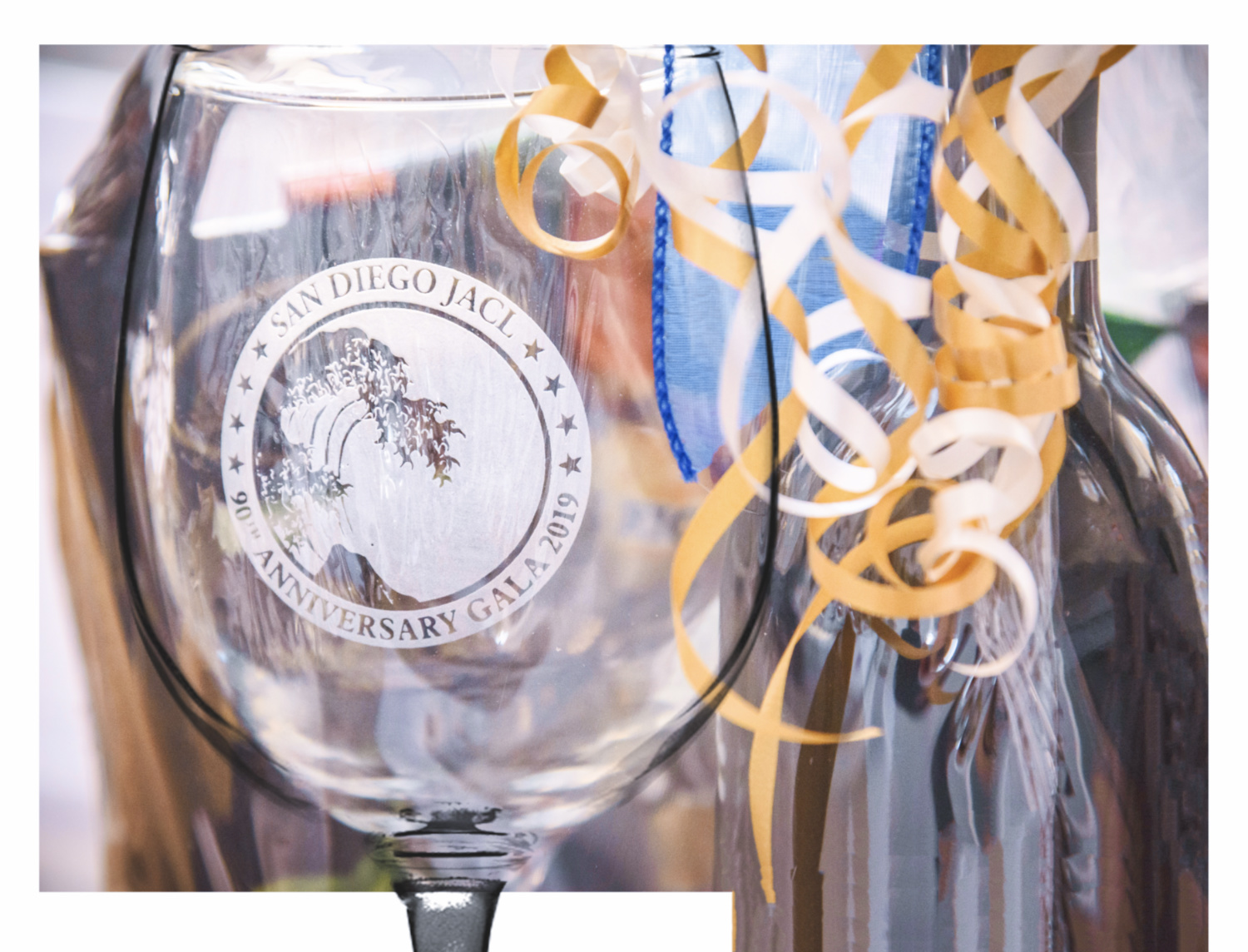 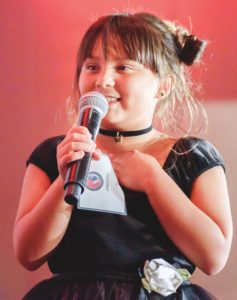 Maiya Ito leads the audience in reciting the Pledge of Allegiance. (Photo: JadeCoastPhoto.com)

On the evening that the San Diego chapter of the JACL celebrated both its 87th year and the 90th anniversary of the national organization of which it is a part, it was fitting that 10-year-old Maiya Ito led the 220 guests in reciting the Pledge of Allegiance and 99-year-old 442nd Regimental Combat Team veteran Mas Tsuida lent his presence at the proceedings. 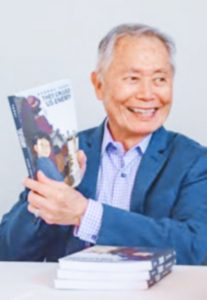 George Takei displays a copy of his new graphic memoir, “They Called Us Enemy.” (Photo: JadeCoastPhoto.com)

Adding a dash of Hollywood glamour leavened with a serious undertone was showbiz icon and Lifetime JACL Member George Takei, who was on hand to give the keynote speech at the Sept. 14 event at the Town & Country San Diego Convention Center, sign copies of his new graphic memoir, “They Called Us Enemy,” and celebrate the 11th anniversary that very night of his marriage to his husband, Brad Takei.

Praising the JACL’s 1994 historic vote to support marriage equality, George Takei in his speech said, “The JACL was the first minority civil rights organization to take that bold stand. It was a leadership position that they took, and it took more than two decades for the United States Supreme Court to agree with them.”

Adding to the night’s allure were mistress and master of ceremonies, actress Tamlyn Tomita and KABC-TV Channel 7 news anchor David Ono, reprising their roles at the same venue from a year earlier. Also present to give a heartfelt speech of his own was JACL Executive Director David Inoue. 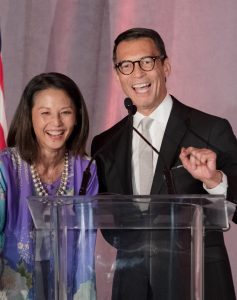 With the success of the Redress Movement more than 30 years in the past during a present when would-be immigrants face executive branch directives placing barriers to entry, and with legal permanent residents and even some U.S. citizens facing suspicion because of national origin or religious beliefs, Inoue underscored the importance of JACL’s mission today.

“Our community’s history has a heavy burden to carry because it brings with us so much responsibility,” he said. “We remember that almost no one stood up for us during the war. Not the ADL, the ACLU, the NAACP. What we learned from that failure of others to stand up for us was that we need to stand up for others.”

In a nod to the past, the event recognized all past presidents of the San Diego chapter (see list) from 1933 to today. While contemporary former presidents were able to receive a commemorative medal in person, descendants of some of the early-era presidents were on hand to receive the honor. 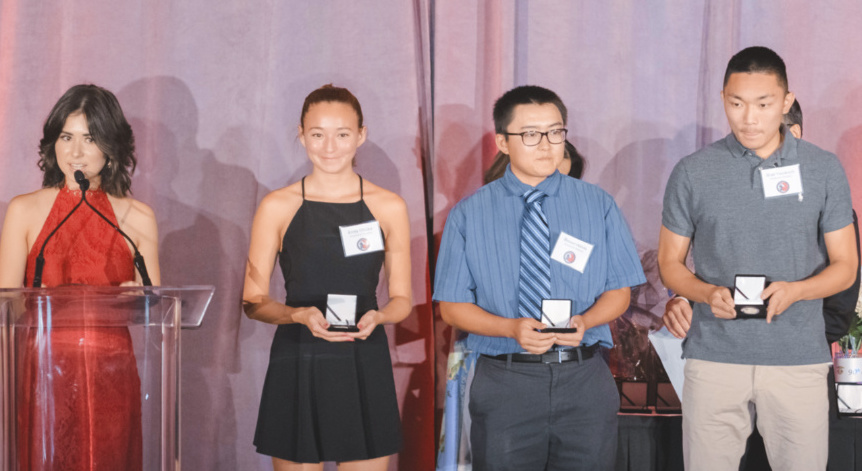 Not present were Hailey Sasaki (continuing education scholarship awardee) and Aileen Yagi and James Ozaki, who each were awarded freshman scholarships. 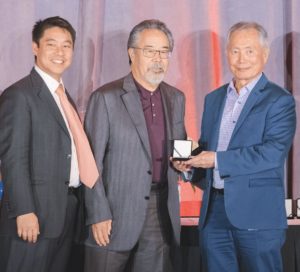 Born at Colorado’s Camp Amache (Granada War Relocation Authority Center), Otsuji was recognized belatedly after being inadvertently passed over at last year’s gala when local denizens who had been incarcerated in Japanese American concentration camps during WWII were acknowledged.

After acknowledging the chapter’s board of directors, Chapter President Michael Kurima introduced Gala Chairman Robert Ito, whose granddaughter led the Pledge of Allegiance. Ito thanked gala committee members — Fiona Chao, Linda McLemore, Suzanne Miyasaki, Mimi Morisaki, Sidney Shiroma, Alissa Todd and Jon Yokoyama — and singled out the event’s producer, Lane Nishikawa, who shared with the audience a short video about the San Diego Chapter and later in the program, clips from his upcoming documentary about the JACL titled “League of Dreams.”

Nishikawa related how he had applied for — and failed to get — funding for his documentary “Our Lost Years” — DVD copies of which were for sale in the lobby — from ITVS or the Independent Television Service, which funds documentaries that appear on PBS.

During Nishikawa’s conversation with the ITVS rep who broke the bad news to him, she asked him as an aside about the Japanese American Citizens League.

“I told her, ‘It’s the oldest and largest Asian American civil rights organization in the United States, established in 1929.’ And she went, ‘Really? Never heard of it. But I bet that’d make a great film,’” Nishikawa recalled. 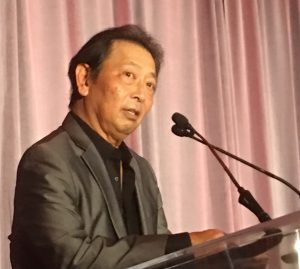 Lane Nishikawa updates the audience on the progress of his upcoming documentary, “League of Dreams.” (Photo: George Toshio Johnston)

Nishikawa said it hit him later that with the 90th anniversary of the JACL coming up, a documentary on the JACL would make for great subject matter, and he started recording interviews for this new documentary two years ago at the National JACL. He alluded to the clip of “League of Dreams” that he showed at last’s year’s San Diego JACL gala (Pacific Citizen, Oct. 12, 2018).

Nishikawa submitted the grant for “League” in 2018 — and the ITVS administrator again had disappointing news, but told him, “You were close.” Nevertheless, Nishikawa said he is forging ahead with plans to complete his new documentary and will travel to 15 cities to record more interviews.

In Inoue’s speech, he referred to Resolution 3, an amended version of which was approved at the JACL National Convention on Aug. 3 in Salt Lake City, whereby the JACL apologized to Tule Lake incarcerees “for the role that JACL played in dividing our community during the war and in the years since.”

“It was just a first step toward achieving reconciliation, and there remains much more healing that must take place,” Inoue said. “But this action demonstrates another aspect of history — that it doesn’t just remain in the past, but it continues to have relevance even today and that we have the ability and the capacity to respond to it and do something to change how we see that history.”

During George Takei’s speech, he relayed how he has been a JACL member for more than five decades.

“I was a member of the Wilshire Chapter in Los Angeles. I also served as a president there,” he said, noting that the chapter disbanded after there was a meeting where only five members showed up. “So, it’s wonderful to see this vibrant, alive, thriving JACL chapter getting enormous support from all of you.”

One of George Takei’s current projects is the graphic memoir “They Called Us Enemy,” which reached No. 2 on the New York Times best-seller list after being published in July.

“I told the same story in 1994 as part of my autobiography,” George Takei told the audience, referring to “To The Stars: The Autobiography of George Takei, ‘Star Trek’s’ Mr. Sulu.” “But this one I tell the whole story as a comic strip because as a teenager, I was a voracious comic strip reader. . . . This book is targeting the young readers, the preteens, the teens, the young adults because they’re going to be the voters of tomorrow. 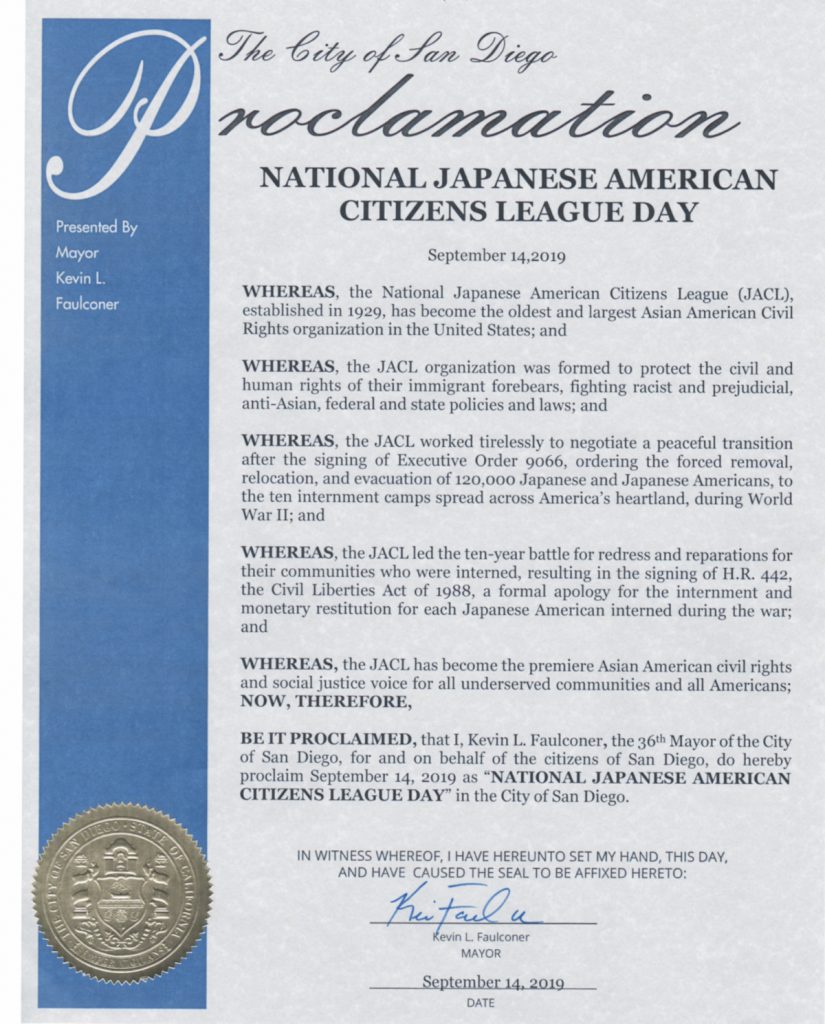 After the dinner ceremonies ended, George Takei signed copies of the book, with proceeds of the sales going to the San Diego JACL. Before that, however, during the course of the evening, Guillermo Castillo, an intern serving the mayor’s office, presented proclamations to both JACL and George Takei from San Diego Mayor Kevin Faulconer.

In his presentation to Inoue, he said, “I would like to take the time to recognize the National Japanese American Citizens League for its tremendous dedication.”

PAST PRESIDENTS OF THE SAN DIEGO JACL