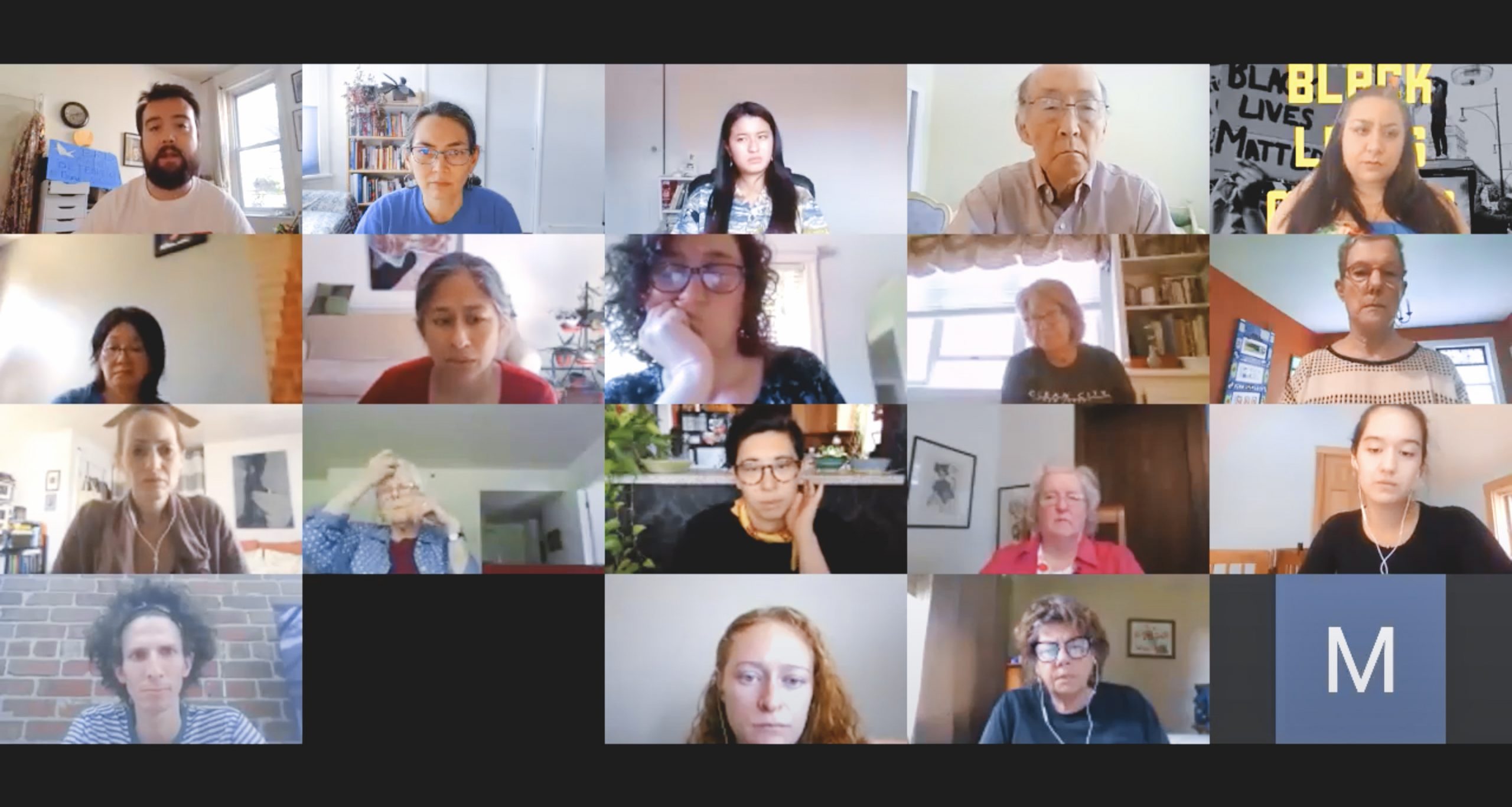 Participants in the Virtual Vigil to Shut Down Berks Detention Center (Photo: Courtesy of Rob Buscher)

The goal of drawing attention to the plight of immigrant detainees is front and center during the Tsuru Rising weekend of action.

As part of the Tsuru Rising weekend of action, JACL Philadelphia hosted a virtual vigil on June 7 in support of the individuals who continue to be detained in the Berks County Detention Center. Pennsylvania is one of two states in the nation that hosts a prison for immigrant children, known as the Berks County Detention Center, the other being Texas. Families have reported verbal abuse, workers’ rights abuses, medical neglect and, in its first year of operation, a mother was raped in front of other families.

This virtual vigil brought together Japanese American incarceration survivors and their descendants, frontline community members and local advocates working within the Shut Down Berks Coalition.

Speakers included representatives from Tsuru for Solidarity, Japanese American Citizens League Philadelphia, Berks Stands Up and Sunrise Movement Berks. The primary goal was to draw attention to the plight of immigrant detainees who are being held in the Berks County Detention Center and call on Gov. Tom Wolf and the Berks County Commissioners to Shut Down Berks.

In June 2017, a federal judge ruled that the detention of children is a violation of federal regulations. In December 2019, Pennsylvania Auditor General Eugene DePasquale released a report calling for the closure of this site, stating in a press conference, “William Penn would likely be deeply embarrassed that this is happening on Pennsylvania soil.”

The vigil program began with JACL members Miiko Horikawa and Hiro Nishikawa, who shared personal testimony from their own childhood incarceration experiences. The history of wartime incarceration was then juxtaposed with the following statements, which were written by two families who are currently being held in detention at Berks, dated April 5, 2020.

My name is PM. I am from Haiti. I am detained at the Berks Detention Center with my wife MN, and our 2-year-old child, HMN. Since we arrived at Berks County Residential Center on March 18, my child has been severely sick. My wife and I have reported it to the medical staff every day since we arrived. She has bumps all around her mouth, chin and lips. Sometimes they bleed. Her throat is severely swollen, so she can’t keep any food inside. She has been feverish. Even though we reported this to the medical staff every day, they did not start giving her medical attention until March 30, 2020.

My daughter is not the only one who is sick at the facility. All of the families that have come and left have not been feeling well. At Berks, we are not given gloves or masks to wear. The only time that we are given gloves are the gloves we receive when we are cleaning the facility. The staff does not wear gloves or masks. They only wear masks when we are being served food. When we asked for these things, we were told that it wasn’t necessary.

The staff who come and go from the facility are always around us. We cannot even take a shower without one of them sitting outside the door. We are all confined in a small space, and there is no way to distance ourselves from other families or the staff. There are less staff working at the facility right now, but they still come and go. We are all detained here together with our children and no way to leave. We are just legally seeking asylum and have not done nothing wrong.

We the detained families are still in charge of cleaning the bathrooms and bedrooms in the morning and the playroom for kids in the afternoon. The only time we are offered gloves is during the cleaning process. I have not noticed the staff doing more cleaning than usual, and we are still only cleaning these areas one time per day. We all share the bathrooms, and they are not cleaned extra or between uses.

No one here speaks my language, and it is very hard to communicate and express our feelings about being detained when it is so dangerous. I worry for my wife and my daughter, who are not well and are terrified. We are asking for help to stay alive. We have close family in the United States who will receive us. I do not know why our lives are being risked at this moment.

My name is GSC. I am detained at the Berks Detention Center with my wife, MC, and our two daughters, MBT, who is 11-years-old, and GRSC, who is 3-years-old. We are very scared about COVID-19 and contracting it while we are detained here. Inside the facility, no one wears gloves or masks. We have never had any meeting with any of the staff explaining what the situation regarding COVID-19 is. We only learn what is going on from the TV news. On the TV, there seems to be a lot of panic and concern, great steps being taken, but not here in the facility.

I am so worried that it might get inside because there are still around 20 people living here, not including staff. Many people are still sick inside the facility. One of the families that is staying here with us, their child was severely sick and feverish. We are not well, and we are scared. We are not allowed to have our own hand sanitizer, gloves or masks to protect ourselves. We are still all together in this one building. We are scared all the time. No person in this facility speaks our language. We cannot communicate with anyone our fears, and they cannot talk to us either. Just to make motions or sometimes send in a person on the phone who can speak our language. We are not safe.

My family is here in the United States ready to receive my wife, myself and my children. I was granted a stay of deportation by a court, so I cannot be deported. I ask that we be allowed to leave this detention center and be safe with our family.

Gov. Tom Wolf and the Pennsylvania Department of Human Services have the power to issue an Emergency Removal Order. JACL members can help amplify this action by calling Gov. Wolf and demanding he take action.