When a stand-alone bill in Arizona meant to honor Fred Korematsu with an annual day of recognition got lumped into a legislative package on COVID-19 enforcement, along with a state representative equating the incarceration of Japanese Americans during WWII with the state’s safer-at-home order, Arizona JACL Chapter President Donna Cheung called “foul.”

“The hijacking of the Korematsu bill, for purposes other than its original intent, erodes trust between elected officials and public citizens,” Cheung said. “It undermines the integrity of the Arizona legislative process.” 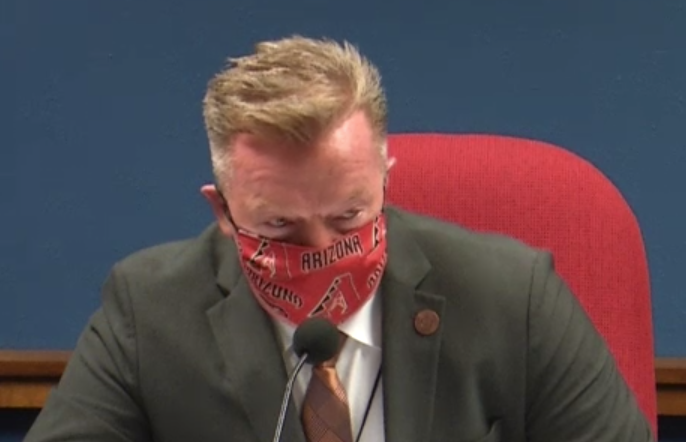 Arizona state Rep. Anthony Kern speaks during the May 18 House Rules Committee hearing. He is the committee’s chair.

The bill Cheung says was “hijacked” is SB 1352, which passed Arizona’s Senate unanimously in February, and was written to honor Fred Korematsu, who died in 2005.

At a May 18 House Rules Committee hearing, Rep. Athena Salman (D-Tempe), stated her opposition to having SB 1352 attached to the COVID-19 legislative package. Noting “the irony” of having the Korematsu bill, which recognized the injustice toward Japanese Americans during WWII, Salman decried “the leadership of Donald Trump and [Sen.] Martha McSally” amid “scapegoating this crisis on China.”

Tying the rhetoric of high-level government leaders to the rise in anti-Asian violence, Salman said, “The data already shows that Chinese Americans and Asian Americans are facing the brunt of that violence and dehumanization.”

The committee’s chairman, Rep. Anthony Kern (R-Glendale), responded by saying he put SB 1352 onto the COVID-19 legislative package because the Korematsu case represented “the government’s dominance over freedom and liberty.”

“A lot of it was done at the very beginning out of fear,” said Kern, apparently in reference to the self-isolation and physical distancing measures put into place in the March. “Anytime we base any decisions on fear, they are probably going to be the wrong decisions.”

Kern added: “We cannot continue to take control of peoples lives like you pointed out, Rep. Salman and that’s why I fully support what our president is doing.”

In a statement released Thursday, the National JACL said it “rejects the initial comparison as an insult to both the legacy of Mr. Korematsu and to the Japanese Americans who suffered the unconstitutional injustices of incarceration. Moreover, JACL reaffirms the power of words to unite, divide, heal, or to incite. Words have consequences.”

Referring to Kern’s conflation of Korematsu Supreme Court case and the COVID-19 legislative package, Cheung said, “As an Arizonan who experienced the safer-at-home order, I was free to move about without threat of arrest or incarceration. … To equate the hardships and trauma of our Japanese American elders with COVID-19 orders is beyond false equivalency. It is obscene.”

Reached by telephone, Cheung told the Pacific Citizen that what Kern failed to understand is that the fear he referred to in 2020 is different than what Japanese Americans in general and Korematsu in particular faced during WWII.

“Fear in 1942 is race-based fear,” Cheung said. “Fear in 2020 is a public-health issue, it’s against a virus. He didn’t grasp that — or he chose not to grasp that. The subtext of it all is that they saw something they could hijack to make the same point that national leadership was making and to hopefully have some electoral outcome of dividing AAPI votes or something like that.”

During WWII, Korematsu, along with Gordon Hirabayashi and Minoru Yasui, lost their Supreme Courts challenges related to President Roosevelt’s February 1942 Executive Order 9066 that paved the way for the forced removal and eventual incarceration of thousands of ethnic Japanese — legal resident alien and U.S. citizen alike — from the Pacific coast.

Decades later, the men’s cases were revived using the writ of error coram nobis legal procedure, which resulted in Korematu’s conviction being overturned and in the subsequent years, his principled stand has gained greater prominence, as evidenced by the proposed legislation in Arizona to honor him.

Cheung noted that at present, Kern may not even be aware of his May 18 faux pas. “However, just as Fred Korematsu encouraged us to speak plainly about injustice, he also emphasized the need to educate. In that spirit, should any Arizona legislator wish to learn more about the Japanese American experience, I am open for such a discussion,” she said.