In a statement streamed via Facebook Live, JACL Executive Director David Inoue today called on Judge James Boasberg to release “all families being held in the Family Residential Centers on an emergency basis due to the imminent risk of a COVID-19 outbreak.” 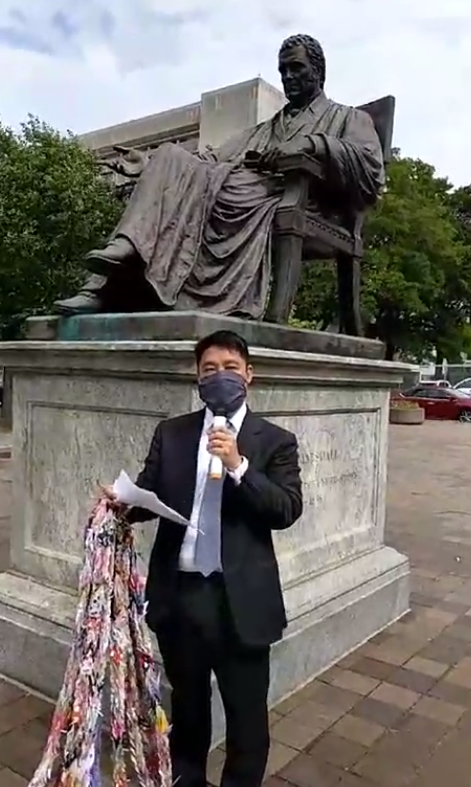 Inoue, who was wearing a mask to cover his nose and mouth and holding more than 500 strung-together origami cranes, read the statement on behalf of Tsuru for Solidarity in front of the John Marshall statue near the E. Barrett Prettyman United States Courthouse.

I am here today representing Tsuru for Solidarity, a direct action project of Japanese American social justice advocates working to end detention sites and support front-line immigrant and refugee communities that are being targeted by racist, inhumane immigration policies. We stand on the moral authority of Japanese Americans who suffered great injustices in U.S. concentration camps during WWII.

We are here today in support of the Refugee and Immigrant Center for Education and Legal Services (RAICES), Rapid Defense Network, and ALDEA-The People’s Justice Center who have filed the O.M.G. v. Wolf case in the U.S. District Court for the District of Columbia seeking to release all families being held in the Family Residential Centers on an emergency basis due to the imminent risk of a COVID-19 outbreak. All three family detention facilities, Berks, Karnes, and Dilley have failed to take adequate measures to protect detained families from COVID-19, and there is no justification for risking these families’ health and safety.

We are appalled by the recently implemented efforts by ICE to bypass requirements of the Flores Settlement and other health and safety requirements by imposing a questionnaire to be signed by detained parents, to be detained indefinitely with their child, or agree to have their child be separated from them and transferred to a “sponsor.”

Over 78 years ago, 120,000 Japanese Americans were unjustly detained and incarcerated under mass living conditions. We suffered repeated incidences of contagious diseases, separation of families, and were forced to sign a double-binding questionnaire to determine who might or might not be released. We are shocked and disheartened to hear that our mass incarceration, later deemed a violation of our constitutional and human rights, is being repeated again.

We urge Judge James Boasberg who will be hearing the case today to affirm the lessons learned from the historic tragedy of the Japanese American mass incarceration experience and release all families being held in the Family Residential Centers due to imminent risk of a COVID-19 outbreak. It is the just and humane decision to make.

Following the formal statement, Inoue noted how the present-day incarceration can traumatize those people and their families not just now but for future generations as well.

The video of Inoue reading the statement can be viewed at: tinyurl.com/ycwhd5qn