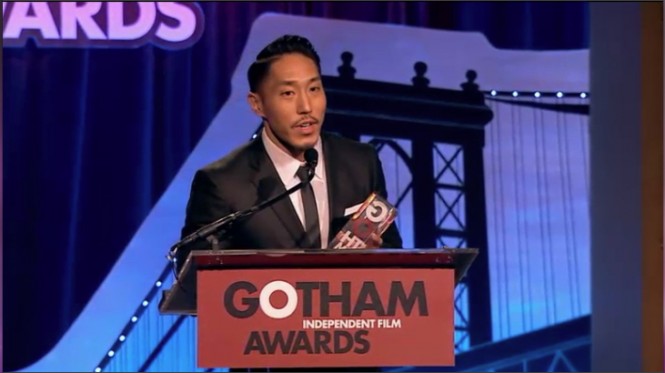 Japanese American filmmaker Tadashi Nakamura beat out the competition over the holidays to win the Gotham Independent Film Award.

Nakamura’s latest film “Jake Shimabukuro: Life on Four Strings” won the Audience Award on Dec. 2 at the 23rd Annual Gotham Independent Film Awards. The documentary was up against the critically acclaimed films “12 Years A Slave” and “Fruitvale Station.”

Nakamura’s film follows ukulele virtuoso Jake Shimabukuro as he embarks on a new chapter of his life as a newly married father. The documentary “Jake Shimabukuro: Life on Four Strings” was produced on a small budget thanks to the Corporation for Public Broadcasting minority consortia and the Center for Asian American Media and Pacific Islanders.

Born to filmmakers Robert A. Nakamura and Karen L. Ishizuka, Nakamura accepted the award and thanked the community for their continued support of this work. “The Japanese American community has supported my work since day one,” he said in a press release. “It’s that type of support and accountability that continues to drive me as a filmmaker.” Nakamura’s past work has been dedicated to showcasing APA community stories. His credits include, “A Song For Ourselves,” “Pilgrimage,” and “Yellow Brotherhood.”

Contracted by Visual Communications, Nakamura is keeping busy with other projects and is scheduled to direct and edit the first retrospective of 50 years of Asian Pacific Islander films. He is also currently working on a project to highlight the Atomic Café in Los Angeles’ Little Tokyo and the Buddhist performing troupe, Kinnara. Nakamura is also writing and directing “Mele Murals,” a film that focuses on Hawaii mythology and graffiti in the islands.