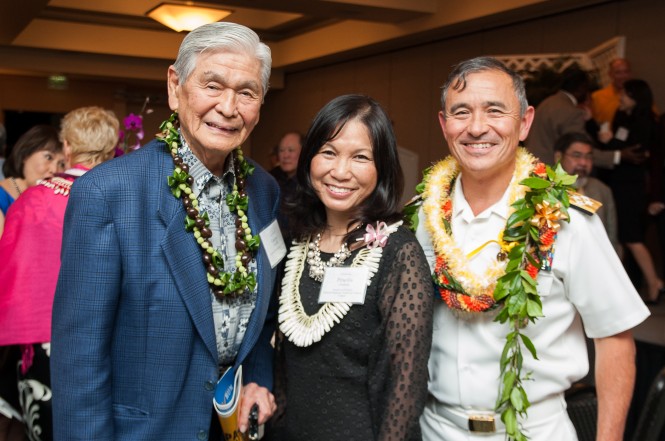 HONOLULU — Adm. Harry B. Harris Jr., commander of the U.S. Navy Pacific Fleet and the highest-ranking Japanese American in U.S. Naval history, was feted by Honolulu-based Japanese American organizations on Feb. 7. More than 200 attended the “E Como Mai” welcome event at the Japanese Cultural Center of Hawaii to honor Adm. Harris, who assumed command of the Pacific Fleet in October 2013. 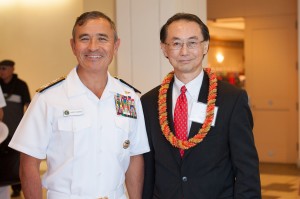 During the dinner, Adm. Harris shared his recollections of growing up in the American South of the 1960s with a Japanese mother who emphasized the need for Harris to embrace his Japanese roots. Adm. Harris credited JACL and its work in the 1950s and ’60s with paving the way — culturally and politically — for modern Japanese American leaders, as well as for enabling his own rise in the military.

Event highlights included performances by Julie Ilikea Afong, the 2008 Miss Aloha Hula contestant in the Merrie Monarch Hula Festival, and a video presentation on the admiral’s background and accomplishments. On behalf of the City of Honolulu, Councilwomen Ann Kobayashi and Carol Fukunaga presented Adm. Harris with a certificate to recognize his many accomplishments and officially welcomed him to the Islands. Hawaii News Now anchor Lisa Kubota served as mistress of ceremonies.

The dinner concluded with a presentation by JACL National Director Priscilla Ouchida to Adm. Harris of an original Gyotaku painting of an ulua fish created by local artist Naoki Hayashi.

The trip, which was not funded by JACL, provided an opportunity for board members to tour the Honouliuli incarceration camp, which is under consideration for National Park status, and to meet with the Hawaii JACL Chapter. National board members visited Honouliuli with the Japanese Cultural Center of Hawaii, which discovered the site in 1998.

Honouliuli, located on property currently owned by Monsanto, is the largest out of the eight Japanese American incarceration sites that were located in Hawaii. More than 1,200 individuals — primarily members of the Japanese American community as well as German Americans, Italian Americans and prisoners of war — were confined in Honouliuli between 1943 and ’45. In 2009, Congress directed the National Park Service to conduct a special resource study of the Honouliuli Gulch and other associated sites within the Hawaii National Park System.

National JACL has been working with the National Park Service to move the project forward.