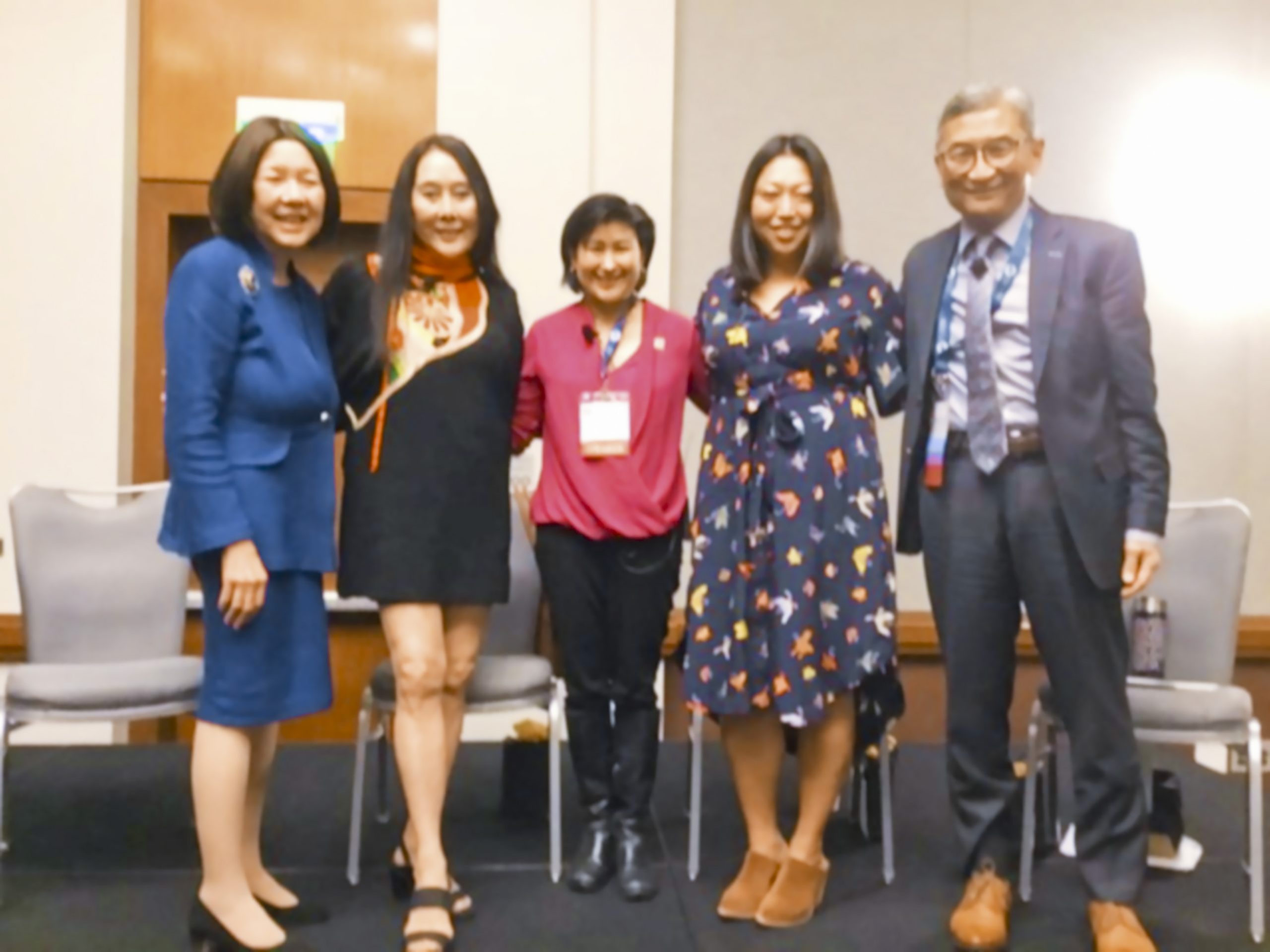 At a breakout session titled “Japanese & Asian Americans in Entertainment: Bold Actions Lead to Changes in Front of the Camera & Behind,” which was held at the Loews Hollywood Hotel in Los Angeles during the U.S.-Japan Council’s 10th annual conference on Nov. 4-5, three Japanese Americans who work in “showbiz” discussed their journeys and experiences in “La La Land.”

They also discussed what the future might hold in a landscape that on the surface appears to have finally changed for the better regarding how Asian American and Asian stories are told by a Hollywood that has had a “come to Buddha moment” in the wake of the critical and commercial success of Asian American-themed movies such as 2018’s “Crazy Rich Asians” from Warner Bros. Pictures and 2019’s “Always Be My Maybe” from Netflix.

“I’m very excited about introducing you to some very famous Nikkei-jin — Japanese Americans — that are in the entertainment industry,” Imada said. “For many, many years, a lot of people thought that the entertainment industry would be very difficult to connect with. But it is one of the most important industries here in Southern California and around the world, so we’re very excited to be able to host these very remarkable women today.

After discerning that none of the panelists had a complete background on their respective roots in Japan, Imada was able to learn more about their families’ American histories, with San Diegan Yoshioka relating that her parents had been incarcerated at Arizona’s Poston WRA Center.

Brannen was born in Los Angeles with parents who met at East West Players (her actress mother’s older brother was the late actor Mako). “I grew up pretty much in a sleeping bag tucked away in a dressing room at East West,” Brannen said.

Sugihara, who was born and raised in Honolulu, related how when she was 6 years of age, her father “decreed that I was going to be a lawyer, so that’s what I did.”

By comparison, Yoshioka was more on the rebellious side.

“I always had to find a way to get around what my parents wanted me to do and what I wanted to do,” she said, stating that even though she earned an academic scholarship to a university, her parents did not want her to go to a school outside of San Diego.

For Brannen, she said her rebellion was “actually to not pursue a career in entertainment.” But, when Los Angeles is your home, she said, “I think we’re all drawn to the entertainment business for various reasons and for me in particular, it’s all about storytelling and taking ownership of our stories.”

While Sugihara described her younger self as “the good Asian girl who did what my parents wanted,” after law school, she found that she “was really interested in entertainment.”

For a while, Sugihara practiced real estate law, business litigation and entertainment law.

“That’s when I started really trying to break out and do film producing because that was a way to be creative,” she said. “People say, ‘Wow, you’re a film producer and a lawyer. That’s so different!’ But I’m like, ‘Not really because lawyers, especially litigators, are storytellers. It’s just that we’re telling nonfiction stories.”

Yoshioka’s entrée into show business began after she graduated from high school and was attending college in Point Loma, not far from home in San Diego.

“I wanted to get away from my family to find out who I was,” she said. Without telling her parents, Yoshioka went north to pursue her passion in dance, auditioned at four different locations and got into all four. She ended up signing a yearlong contract at the Sahara Tahoe.

When her father learned Yoshioka had not only gone to L.A. but also signed a dance contract, she described it as “World War III.” But to his credit, Yoshioka said that since that was what she wanted to do and because she had signed a contract, she had to do it.

“I never looked back, and you know what, I had so much fun,” she said.

Sugihara said her early life experiences in Hawaii were beneficial, but there were also many differences once she came to the mainland.

“For me, growing up in Hawaii, where we were the majority, I always say I came very late to the diversity party. I didn’t even know, until I came to California for college, that it was an issue. I was still saying ‘Oriental’ because that’s not derogatory in Hawaii. My friends in freshman year pulled me aside and had an intervention. ‘You cannot use that word anymore! You have to say ‘Asian,’” she said. She also recalled watching a lot of TV growing up but not questioning the lack of diversity onscreen until much later.

Imada, noting that the three speakers were all women, wondered what, if any, obstacles they faced as females pursuing entertainment careers. For Brannen, whose first experiences were as an agent, she had to learn the hard way that the behaviors that were valued in agency culture were “completely opposite to what we’re taught culturally as Japanese people.”

“Being quiet and thoughtful and wanting to understand the lay of the land before I started to assert myself was allowing for people to make assumptions and put me into a stereotypical box, which, if you get to know me, that’s not what my personality is, but I was playing right into that stereotype,” Brannen said. When she had that “light bulb moment,” she said she had to figure out how to break out of that box.

Sugihara said that while she herself hadn’t encountered obstacles for being a woman in the entertainment industry, she said she did see it “all the time,” which for her was why it is important to have organizations like CAPE to help push the envelope for everybody. She concurred with Brannen that Asian Americans can have cultural traits that could “hold us back.”

Referring to perceptions, Sugihara said, “Asian Americans are good workers, we put our heads down and work hard, but then we’re not seen so much as leadership material. How do we break that stereotype?”

For her part, Yoshioka related a story about one job experience where she finally had to put her foot down about the unequal treatment she received versus that of her male colleagues, where they would fly business class to film festivals and get their own hotel rooms, while she had to fly economy and share a room with a female co-worker, even though Yoshioka herself was a vice president.

The company’s owner, concerned by a memo she had circulated, called a staff meeting to discuss whether the women were treated unequally, something he denied. At the meeting, none of the women spoke up, even though Yoshioka had asked them to be prepared to speak.

The only person who spoke up in her defense was a male colleague — the head of sales — who said the owner did treat women differently. Only then did things change for the better.

“If you have a legitimate beef, voice it. Put it in writing,” Yoshioka said. “It will work.”

Now, with the aforementioned financial success of “Crazy Rich Asians,” one thing that Sugihara said could maintain that progress is to support similar projects going forward.

“That’s really what Hollywood cares about,” she said. “Lately, CAPE has joined forces with another nonprofit called Gold House. You may have heard about #GoldOpenMovement. We focus on the opening weekend of Asian American films because that’s the gold standard for Hollywood. They want to see how much money they make on opening weekend.”

Imada switched gears to get the panelists to weigh in on the #MeToo and #TimesUp movements and whether it affected them personally and if it has made any improvement in Hollywood, especially for Asian Americans.

Yoshioka mentioned that she had just completed a sexual harassment seminar at her workplace and found that there are now so many rules.

“The one that I don’t like: Now, you can’t even make a joke,” she said. “The good part is now men are aware, and they can’t do what they used to do. … Is it working? I think more for the fear of a lawsuit, probably.”

Sugihara was more guarded in her assessment of whether a real shift has taken place.

“I think it’s started. At least it’s elevating the conversation, which is important because sunlight is the best disinfectant. Once we have things out in the open and people can really start to analyze things,” she said, “I think that will help with the progress.”

“I think it’s going to take time for there to be real change,” said Brannen. “It’s like turning a cruise ship. It has to turn incrementally, you can’t just make a hard right. Like Michelle said, we’re now having conversations that we weren’t having before.”

As for what the future may hold for Japanese Americans and Asian Americans in Hollywood, Sugihara referred to AMC’s “The Terror,” featuring George Takei, and noted that there are several projects were in the works, including a soon-to-be announced big project from Netflix and a remake of the 1980s miniseries “Shogun.”

One question from a documentary filmmaker in the audience was whether Japanese American stories were out of vogue now, compared with Korean- or Chinese-related stories. To that, Imada said, “If we tell the story better, then you’re going to get people to be excited about the story. … We should always talk about the internment experience, yes, but is there a different way to tell that story? Is there a different narrative to bring to the table?”