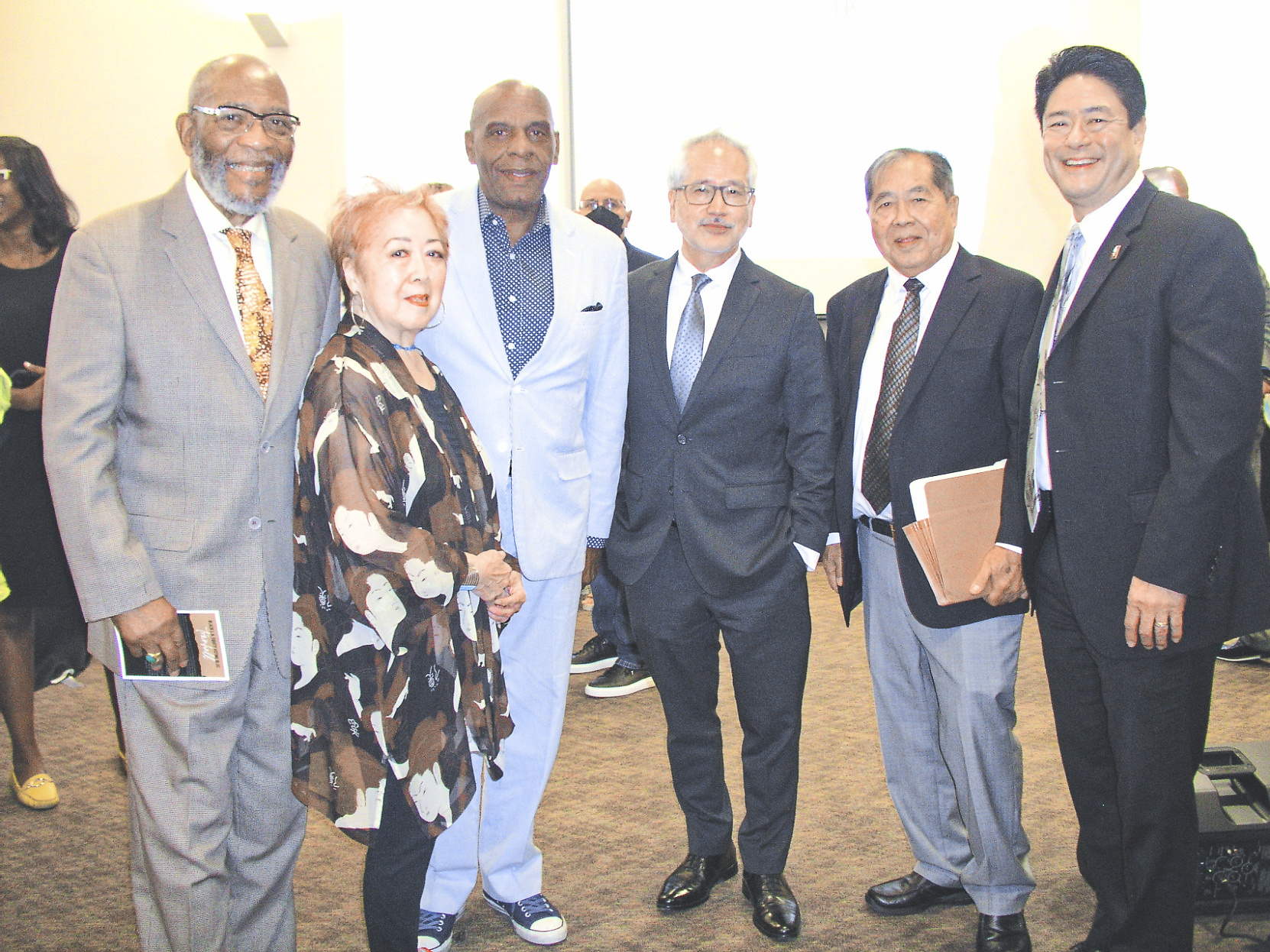 Trio give background, perspective in a bid to inform African American reparations.

According to the Office of the Attorney General of California, Assembly Bill 3121 in 2020 established a “task force to study and develop reparation proposals for African Americans, with a special consideration for African Americans who are descendants of persons enslaved in the United States.”

On Sept. 23 and 24, the Reparations Task Force held a public meeting at the California Science Center’s Wallis Annenberg Building in Los Angeles to discuss how those objectives might be achieved.

For those Japanese Americans who were part of the Redress Movement, those objectives had particular resonance. The forced removal from the West Coast and subsequent incarceration of ethnic Japanese — most U.S. citizens — began with President Franklin D. Roosevelt’s Executive Order 9066 on Feb. 19, 1942. Of the 120,000-plus persons so affected, some are still alive today.

The enslavement of African Americans, meantime, may have officially ended with President Abraham Lincoln’s Emancipation Proclamation of Jan. 1, 1863 — but it would take a war between the states to actually end the practice. The last American who claimed to have been a slave died in 1971.

Although American slavery was a longer-lasting and far more devastating and dehumanizing institution than the Japanese American incarceration of World War II, both communities are still dealing with the trauma and aftereffects of those respective experiences in the present day.

Unlike African Americans, however, Japanese Americans achieved a rare feat in U.S. history: winning a legislative victory that acknowledged and apologized for the abrogation of rights and due process, a win that included a $20,000 payment as a form of legal remediation to surviving Japanese Americans whose lives and livelihoods were affected. That victory occurred more than 30 years ago with the passage of the Civil Liberties Act of 1988.

It was with that backdrop that three Japanese Americans who were involved with and knowledgeable about the Japanese American Redress Movement were on hand during Day 2 of the public meeting to provide background, history and perspective from one aggrieved community’s quest for justice to another. For the trio, it was imperative to be there, an obligation their Issei forebears might call giri. 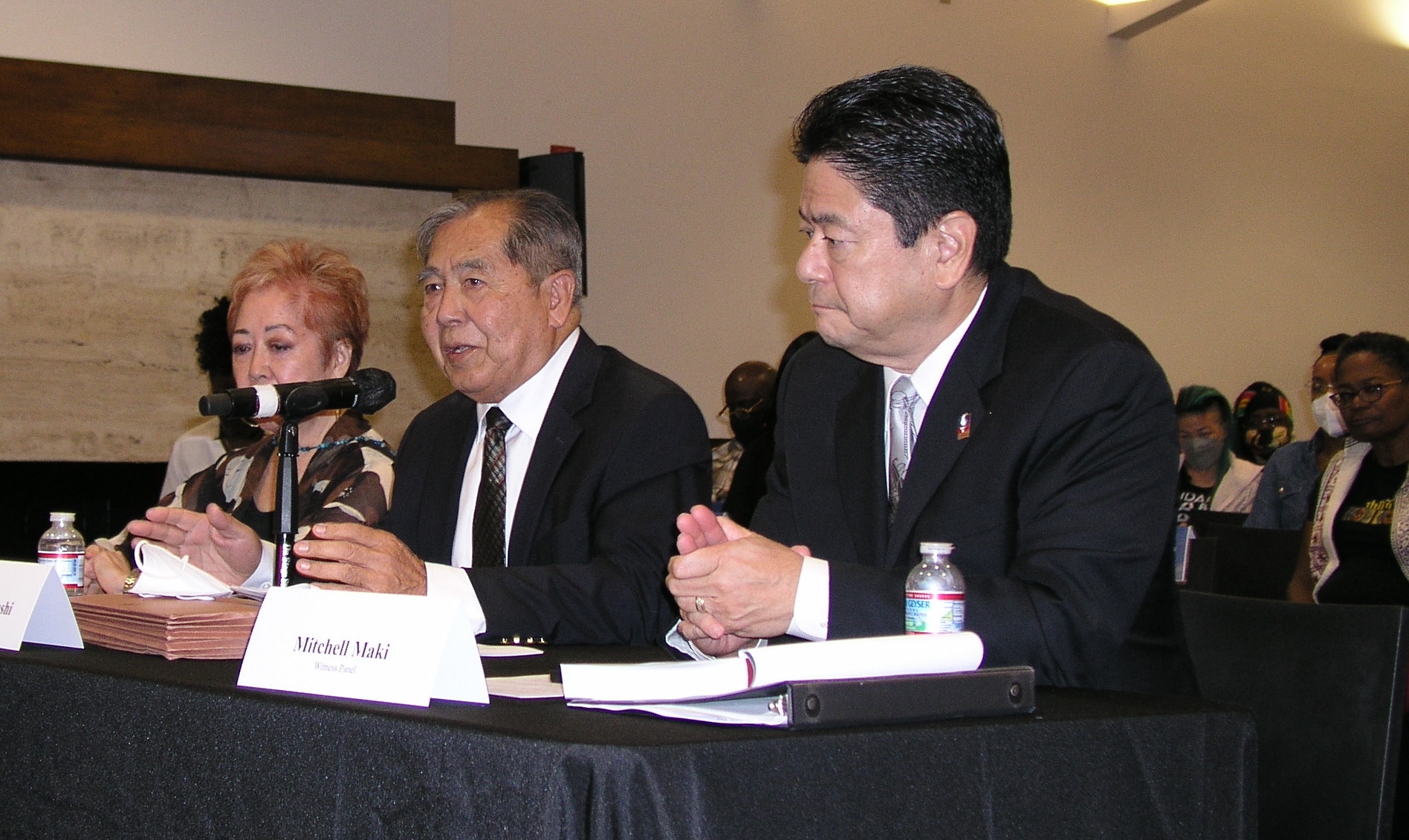 The three were Dr. Mitchell Maki, president and CEO of the Go For Broke National Education Center and author of “Achieving the Impossible Dream: How Japanese Americans Obtained Redress”; Ron Wakabayashi, former national director of the Japanese American Citizens League who served during the height of the Redress Movement and afterward was the executive director of the Los Angeles County Commission on Human Relations and Western regional director of the Justice Department’s Community Relations Service; and Miya Iwataki, a longtime community activist with Nikkei Progressives and NCRR, when it stood for National Coalition for Redress and Reparations and now as Nikkei for Civil Rights and Redress.

Speaking first was Maki, who said, “I would like to start off by emphatically stating that I, nor my fellow panelists, make any claim to equivalency between the incarceration of Japanese Americans during World War II and the institution of African American slavery, which stained our nation for two and a half centuries. Rather, I intend to simply share some insights from the Japanese American Redress Movement, which I hope you will find relevant to the work of your task force.”

Maki then stated that he wanted to emphasize three “insights from the Japanese American redress experience,” namely the importance of speaking with a unified voice; the public commission hearings and education of the general public, a reference to the Commission on Wartime Relocation and Incarceration of Civilians*; and the objective of redress for the Japanese American community.

Maki also addressed the issue of the monetary aspect of Japanese American redress. “In the end, our community eventually agreed to a ‘symbolic’ payment of $20,000 for each affected individual and the creation of a $50 million community fund, for many different reasons. This level of monetary payments, coupled with the presidential apology, satisfied many in the community but left others feeling less than satisfied.

“Therein lies a critical issue for the Task Force,” Maki continued. “Is a ‘symbolic’ payment for African Americans appropriate? On one hand, the actual dollar amount of the harm would be incredibly high — and probably politically impossible. On the other hand, to be ‘symbolic’ on this issue can be seen as a slap in the face or a disingenuous attempt to pay the issue away.”

The baton passed to Wakabayashi, who, echoing Maki’s introductory statement, said, “The Japanese American experience, as wrong and hurtful as it was, was not of the scale of this country’s legacy of chattel slavery. It was a different time and different journey.

“If there are helpful takeaways from our experience, I hope that they will contribute,” Wakabayashi continued. “It would help repay a great debt. The Black Civil Rights Movement generated the Japanese American Redress Campaign and led the struggle for human rights in this country.”

Echoing Maki’s reference to the CWRIC and the 10 multicity hearings that were part of its mission, Wakabayashi said, “It was, in fact, the Commission process that informed, educated and transformed our community, as well as our internal relationships and relationship with allied communities,” adding how it was “the telling and the hearing of the stories” that proved to be “an essential part of ultimately achieving a legislative and social victory.”

In reference to the $20,000 figure received by surviving Japanese Americans affected by the government’s mass incarceration, it was an “arbitrary number,” Wakabayashi said. “It was enough not to be insulting in that time period … I don’t think it would be acceptable to us today, even as a symbolic gesture, but at the time, it was.”

Wakabayashi also relayed how the Japanese American community needed to reconcile and recognize the actions of both those who resisted the government’s unjust incarceration and the role of Nisei veterans who served in the military during WWII, with the segregated 100th Battalion/442nd Regimental Combat Team becoming “the most decorated in history for size and length of service, winning seven Presidential Citations.”

Speaking next was Iwataki, whose remarks generated the most-enthusiastic responses from the audience. Noting that her mother had been incarcerated at the Manzanar War Relocation Authority Center and her father had been a staff sergeant in the 100th/442nd RCT, she said, “I want to acknowledge the difference in our fight for reparations for the injustice of the concentration camps and the 400 years of history of enslaved people. We’re not here to make recommendations or to prescribe lessons learned.

“I’m here to share the experiences of NCRR, an all-volunteer grassroots organization that fought for reparations and to express our continuing solidarity for Black reparations today.”

Iwataki also noted that historically, California was once “ground zero for anti-Japanese hate and anti-Asian legislation,” which “set the stage for imprisonment of Japanese Americans.” She called the value of the CWRIC and the hearings “incredible.”

“Standing up and speaking out was powerful and transforming for our community that was told to be ‘quiet Americans.’ The testimonies educated my entire generation. Those stories exposed the little-known history, and the hearings gained national media attention and started generating support,” Iwataki said. “Those hearings and our people that spoke put a human face on the Japanese American concentration camp experience for the nation and the world.” 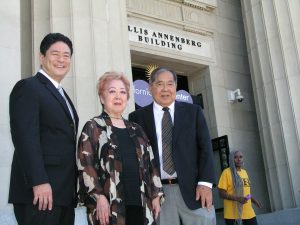 Mitch Maki, Miya Iwataki and Ron Wakabayashi stand outside the Wallis Annenberg Building at the California Science Center after presenting their perspectives on the Japanese American Redress Movement at the Sept. 23-24 public meeting of the Reparations Task Force in Los Angeles. (Photo: George Toshio Johnston)

She also noted the recommendations of the CWRIC’s report, “Personal Justice Denied,” and stated that it “found no military necessity for the camps. The Commission recommended a presidential apology, civil liberties education funding and direct monetary reparations. It was immediately put into legislation, where we faced a real uphill battle in Congress, maybe similar to what the Task Force will be facing when they introduce legislation in the state and in the Senate and Assembly.”

Concluding her remarks, Iwataki said, “The Japanese American internment reparations movement was not an isolated campaign. It was part of a continuation of a legacy of building a movement that continues to this day, and we want to thank you for letting us share our experience and continue to stand in solidarity with Black reparations.”

Tamaki, who was a member of the coram nobis legal team that reopened the WWII-era Supreme Court case Korematsu v. the United States, called the meetings an “opportunity to educate not only internally, the community, but also the American public. And this Reparations Task Force is, I think, just the beginning of that process.”