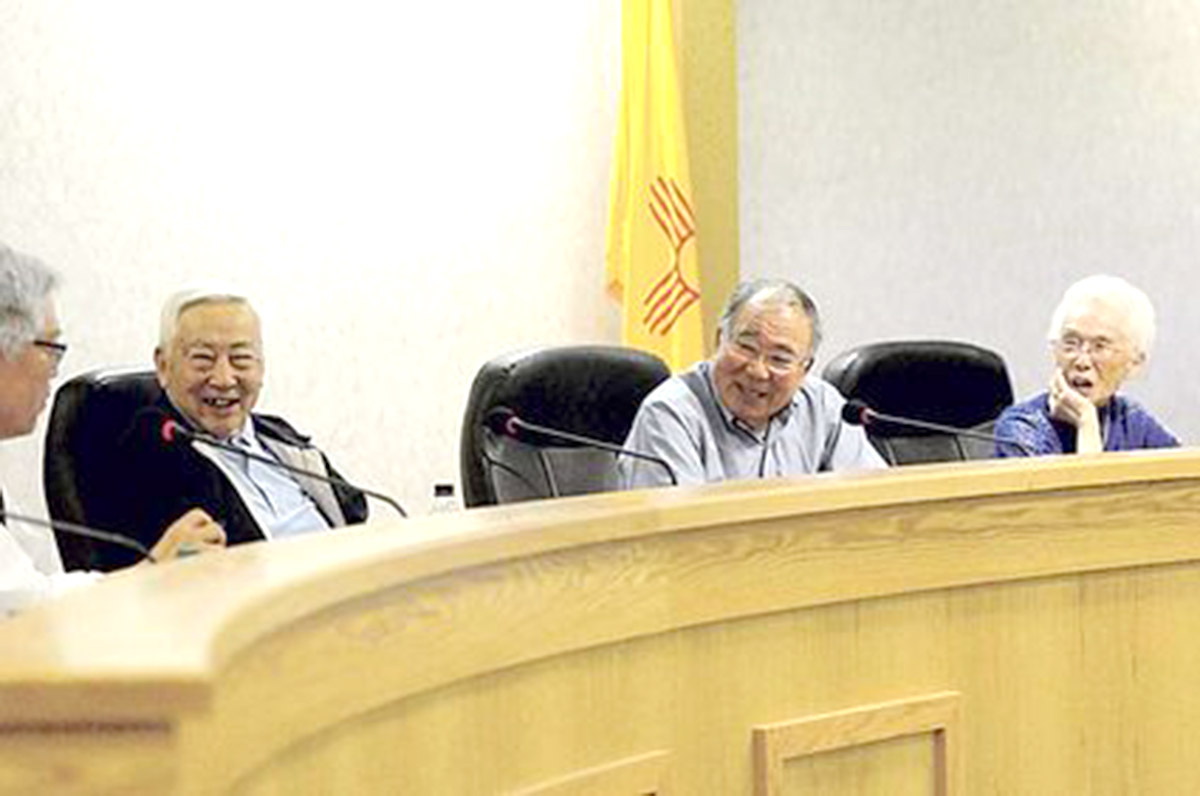 CLOVIS, N.M. — Roy Ebihara, Lillie Kiyokawa and Fred Kimura knew about as much as you’d expect a bunch of 8- and 9-year-old kids to know why 1942 played out the way it did for them as Japanese Americans living in Clovis, N.M.

The approximate 75 years that have passed educated them on Japanese American relations before and after the attack on Pearl Harbor and just what fear, hysteria and people looking the other way could do to bystanders of a particular heritage.

Ebihara, Kiyokawa and Kimura — with some help from other storytellers from around the state — shared that education with a panel discussion on March 24 at the Clovis-Carver Public Library.

Speaking to a crowd of nearly 100, Ebihara, Kiyokawa and Kimura recalled their experiences of living in a New Mexico confinement site for nearly a year before being moved to larger WRA camps in Utah and Arizona for the remainder of World War II.

The three were among 32 Japanese American Clovis residents who were sent to internment camps in the weeks following the Dec. 7, 1941, Japanese attack on Pearl Harbor.

The attack flung the United States into World War II and citizens on the homefront quickly fomented distrust upon their neighbors of Japanese descent.

The attack happened on a Sunday. “We were waiting for a church bus to pick us up,” Kiyokawa said. “It never showed up.”

Between the three — Kimura and Kiyokawa are siblings — they had two fathers who were railroad machinists. The Japanese employees were often unwelcome in railroad unions, but still faced retribution for working during union strikes.

Ebihara remembered mornings would start with his father leaving for work after his mother packed his lunch. But on Dec. 8, 1941, Ebihara said, “He came back soon after with his lunch pail, and never went back to work.”

In retrospect, Japanese American life in Clovis wasn’t so great prior to World War II. The three did attend Eugene Field Elementary with other children, but went home to a housing area near the railroad tracks, with outhouses and dwellings that incorporated old railroad cars.

“They were known as Jap camps,” said Andy Russell, a Central New Mexico Community College instructor who has researched Japanese internment since his senior year at Nevada-Las Vegas in 1987. “I’m sure the people who lived there called it something else.”

They knew no better as kids and had mostly pleasant memories of grabbing cacti and tarantulas to sell to train passengers with little success.

But they knew the Pearl Harbor attack and the Jan. 20, 1942, midnight call to pack their bags weren’t positive memories.

They were brought to what was known as the Baca Camp near Raton. They lived in barrack-style buildings until mid-December and were part of 120,000 confined persons of Japanese ancestry. Many were American citizens by birth.

They didn’t return to Clovis for decades after that, though Ebihara’s U.S. Army service took him to White Sands Missile Range. What hadn’t been looted from their childhood homes was bulldozed, and they never found out what happened to the bicycle Lillie got for Christmas or the Kimura family’s 1939 Studebaker President.

The history was mostly forgotten in Clovis until 2014, when Clovis native Adrian Chavez was taking a course in Albuquerque.

He took to what Russell said about what happened to those Clovis residents and felt a personal connection because of the prejudice he’d experienced in Clovis with Japanese and Hispanic roots. He had a chance meeting with Mayor David Lansford on a Clovis visit. Upon hearing the story, Lansford asked Chavez if he could hang around for the next day’s City Commission meeting.

“I knew it was an important part of history that needed to be told,” Chavez said. “And here we are now, still talking about it.”

The commissioners, Chavez said, were told they needed to answer for the injustice.

Later that spring, Ebihara, Kimura and Kiyokawa were honored by the city and served as marshals for the annual Pioneer Days.

“We do need to remember our history and the injustices of history,” Lansford said. “We need to reconcile what happened. If we don’t reconcile, it becomes a scar that never heals.”

The exhibit is part of a project that includes historic markers, an outreach publication that should be available in April and a website that will incorporate the exhibit’s information.