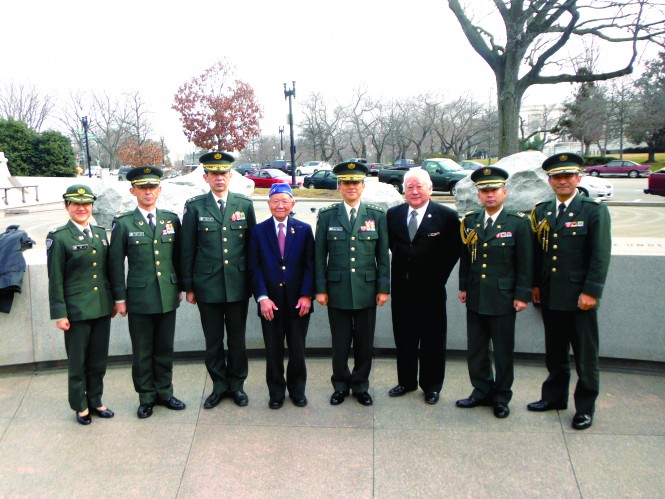 Gen. Iwata said the combat performance of the Nisei in Europe and the Pacific is highly respected by him and the people of Japan. They have read books about the Nisei combat record and have seen a series of films on the internment, the 442nd Regimental Combat Team and the Nisei who served in the Military Intelligence Service. Gen. Iwata also mentioned the hardship that the Nisei have overcome during the period and requested his best wishes be conveyed to Nisei veterans of all wars for serving their nation so nobly.

Yamada said the National Japanese American Memorial to Patriotism, which opened to the public in 2000, is a national tribute to the patriotism of Japanese Americans and is inscribed with President Ronald Reagan’s national apology. The memorial was designed to incorporate the strong tie Japanese Americans have with Japan, such as the two bronze cranes used as the centerpiece of the memorial, the Japanese cherry trees that ring the memorial and the five boulders that were imported from Japan and represent five generations of ethnic Japanese in America. The memorial site also serves as a remembrance of the 10 confinement sites and the omore than 800 Nisei who died in the line of duty during World War II. Finally, of the nearly $12 million raised from private donations to build the memorial, more than $100,000 came from donors in Japan.

Shima discussed the harsh treatment meted against persons of Japanese ancestry during the war years, the exemplary performance of Nisei in combat in Europe and in intelligence gathering in the Pacific, President Harry Truman’s affirmation of Nisei loyalty, the reforms instituted after WWII that improved opportunities for minorities to compete for any job and position, Japanese American achievements in the military, public service, academia and the corporate world and JAVA’s efforts to build a strong U.S.-Japan alliance.

Gen. Iwata, who was born in Tokushima Prefecture in 1957, graduated from the National Defense Academy in 1979 and has served in various staff and command positions. He was promoted to his present assignment in August 2013.