Art Shibayama, who was profiled in the Feb. 10, 2017, issue of the Pacific Citizen, will finally get a hearing on March 21. 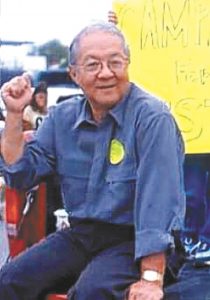 Isamu Carlos “Art” Shibayama, who was among the more than 2,264 Japanese Latin Americans (JLA) kidnapped from their homes in 13 Latin American countries during World War II by the United States government to be used in hostage exchanges with Japan, will finally get a hearing before the Inter-American Commission on Human Rights (IACHR) in Washington, D.C., on March 21, from 8:30 a.m., in the Padilha Vidal Room.

“We want to let the people know what happened to us,” said Shibayama. “We’ve been fighting the U.S. government at the IACHR for over 13 years.”

“This is an historic event,” said Grace Shimizu, who has been heading the Campaign for Justice: Redress NOW for Japanese Latin Americans! (CFJ) for decades. “We are asking for redress because we’re charging the U.S. government with the ongoing failure to provide redress for war crimes and crimes against humanity that were perpetuated against the Shibayama brothers who were children during World War II.”

Although the IACHR hearing comes nearly 14 years after Shibayama had submitted the petition, Shimizu said this was not uncommon and that they had been given expedited consideration. Had the petition followed chronological order of filing, Shimizu said they may have had to wait another year and a half.

“It just goes to show you that there’s a lot of human rights violations going on,” said Shimizu.

Shibayama and his two brothers, Ken and Tak, had filed their petition with the IACHR after unsuccessful attempts at the following:

Shimizu said they are hoping for a favorable ruling by the IACHR, whose mission it is to promote the protection of human rights in the American hemisphere, which includes the U.S., Canada, Latin America and the Caribbean.

However, while the IACHR has no enforcement authority, the commission’s ruling can clarify and strengthen international law and legal protections.

“The body does not have enforcement powers like the criminal courts, but their ruling can interpret or set a precedent for international law,” said Shimizu. “So, if the Trump Administration feels that this is an important ruling and they agree with it, the U.S. government, then, can abide by the ruling. But if it does not, still other victims of human rights violations in the Americas can point to this ruling and use it in their cases.

“So, the final ruling of this case is very important because it can help other people,” Shimizu continued. “Plus, later, if there is another U.S. administration that is supportive of human rights and recognizes the importance of this ruling, that administration can follow the ruling. It’s not just an empty gesture that we’re going through.”

In addition, Shimizu pointed out that this hearing offers them an opportunity to continue educating the public.

“This is one way to educate the public because this is not really taught in school, and if we don’t keep speaking out, it’s in danger of being lost,” said Shimizu. “This is an important educational effort that is reaching beyond the United States.”

Shimizu said the CFJ has been getting inquires as far away as Brazil and Japan.

During World War II, the U.S. government had considered using U.S. citizens of Japanese descent incarcerated in the War Relocation Authority and Department of Justice camps in hostage exchanges with Japan for U.S. citizens, many of Western European descent, caught in the Far East war zone.

However, exchanging an American for another American, on basis of race or national descent, had constitutional violation issues, and instead, the U.S. government collaborated with 13 Latin American governments to round up persons of Japanese ancestry living in Latin America (both citizens and immigrants) to be used in hostage exchanges between the U.S. and Japan.

Shibayama’s maternal grandparents were used in a hostage exchange with Japan during the war, and he never saw them again.

The majority of JLAs were imprisoned at the Department of Justice camp in Crystal City, Texas. Once the war was over, the U.S. government continued to classify the JLAs as “illegal aliens,” and some of the Latin American countries refused the return of JLAs.

As a result, most of the JLAs were deported to Japan. Several hundred were able to fight deportation with the help of civil rights attorney Wayne Collins; of these, many were paroled out of camp to work at Seabrook Farms in New Jersey.

Shibayama, even though classified as an “illegal alien,” was drafted into the U.S. Army in 1952. While serving in the military, Shibayama’s commanding officer encouraged him to apply for U.S. citizenship, but Shibayama was denied on grounds that he had entered the country illegally.

Shibayama would not be granted U.S. citizenship until 1972.

When the ruling came down on the Mochizuki lawsuit in 1999, Shibayama opted not to accept the settlement and made the decision to continue fighting for equitable redress for JLAs.

Shibayama added that he found the apology letter that the JLAs received under the Mochizuki settlement offensive.

Actually, you can give it to a hakujin (Caucasian), and it’ll pass.”

“They really suffered more than us, Japanese Americans,” said Shibayama’s wife, Betty Morita Shibayama, who was incarcerated in the Tule Lake and Minidoka WRA camps during the war. “At least we were able to stay in our own country. Their countries (JLAs) weren’t even at war, and they were taken to a country that was at war. And once they got here, they didn’t speak the language. They only spoke Spanish and Japanese, so they really got a raw deal.”

Currently, the Campaign for Justice: Redress NOW for Japanese Latin Americans! is collecting signatures on a petition through Change.org (https://www.change.org/p/inter-american-commission-on-human-rights-justice-now-for-the-shibayama-brothers), which will be submitted to the IACHR on March 21.

The petition is available in English, Spanish, Japanese and Portuguese.

Those who do not have access to the Internet are asked to send a letter with their signature to “Campaign for Justice,” P.O. Box 1384, El Cerrito, CA 94530.

Some points to include in the letter are the importance of this case, not only for the Shibayama brothers, but also for all people who have suffered during wartime from government abuses; and to request a favorable ruling in this case.

The delegation is also raising funds to cover legal and travel expenses. Checks should be made to “Campaign for Justice” and mailed to the El Cerrito address.

For more information, send inquiries to JLACampaign@gmail.com or visit https://www.facebook.com/campaignforjusticeJLA/.