Art Shibayama testifies in Washington, D.C., however, a ruling may not come for several years.

Isamu Carlos “Art” Shibayama and the Campaign for Justice: Redress Now for Japanese Latin Americans! delegation appeared to have received a favorable hearing before the Inter-American Commission on Human Rights (IACHR) on March 21, but an official ruling may not be expected for years.

The IACHR is an independent agency of the Organization of American States and is tasked with promoting and protecting human rights in the Americas. Currently, representatives from six different nations from the American hemisphere comprise the IACHR, and petitions are not heard before the commission unless all available domestic legal actions have been pursued and exhausted.

The tone of the hearing was set early after Shibayama testified about being forcibly removed at the age of 13 from Peru with his parents and siblings during World War II and then brought to the United States and incarcerated at the Department of Justice camp at Crystal City, Texas. 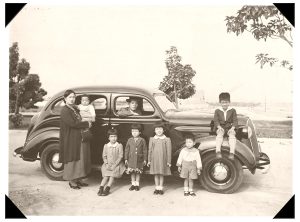 The Yuzo Shibayama family in Peru in 1939. From left: Tatsue, Tak, Fusa, Rosie, Susie, Art and Yuzo (inside the car).

Francisco Jose Eguiguren Praeli, IACHR president and commissioner from Peru, extended a personal apology to Shibayama after Shibayama testified before the commission.

Speaking in Spanish, Eguiguren said, “I sympathize with you over the unfair treatment and conditions you’ve lived through, and it happened in my country. I would like to extend an apology. This is my personal sentiment, not from the commission.”

During the question and answer period, Commissioner Paulo Vannuchi from Brazil posed the question to the Shibayama delegation whether they felt Peru should also be found culpable for what had happened.

Paul Mills, the Shibayama delegation’s attorney, said the burden of the petitioner’s complaints fell upon the United States.

Art Shibayama testifies before the Inter-American Commission on Human Rights on March 21 in Washington, D.C. Pictured in the audience behind him from left are Hiroko Crary (with headphones) Sojin Kim, Noriko Sanefuji and Blanca Katsura, a Japanese Peruvian who was taken from her home at age 12. (photo: CFJ)

Margarette May Macaulay, IACHR first vp and commissioner from Jamaica, voiced her personal view during the hearing that she found the process of bringing the JLAs to the U.S., then taking away their passports or citizenship documents, and then declaring them as illegal aliens, as “appalling.”

“As you mentioned, young children were adversely affected by this … is unacceptable,” said Macaulay. “This is my personal view, and I’m sure it’s the view of the commission. We cannot accept such violation of rights, which is part of the declarations by which we can hold the United States accountable. And it is a pity that they’re not here this morning because it would have been so helpful to put some questions directly to them about this matter. And we assure you that the commission will consider very seriously about what we can do and cannot do.”

James Cavallaro, the U.S. commissioner whose term will end in December, did not appear at the IACHR morning hearings, including at the Shibayama case.

At a Department of State press briefing held on the afternoon of March 21, an Associated Press reporter asked why the U.S. had not participated in the IACHR sessions.

Mark Toner, acting spokesperson for the State Department, said, “It (IACHR) did request the United States to appear in two thematic hearings today. I think related to the three recent executive orders. One was also related to, I think, migrants claiming asylum at the U.S.-Mexico border. We, the United States, do have tremendous respect for the role performed by the IACHR in safeguarding human rights and fundamental freedoms throughout the hemisphere, including the United States. However, it was not appropriate — and this was deemed not appropriate by our legal experts — for the United States to participate in these hearings while litigation on the matters was ongoing in U.S. courts. So, we did not feel it was — we were able to address the concerns in an open hearing.”

Neither the Shibayamas nor the JLAs have pending lawsuits in U.S courts at this time.

The other two commissioners who were absent from the hearing were Jose de Jesus Orozco Henriquez of Mexico and Esmeralda Arosemena de Troitino of Panama.

During closing statements, Mills extended a plea to the commissioners to expedite a ruling. Citing sections from the American Declaration of the Rights and Duties of Man, which created the IACHR system, Mills said, “These subsections of the commission’s rules grant discretion in an extraordinary case like this where the evidence is not disputed, the facts are cut and dry and the abuse is shocking, to take steps for the extraordinarily swift resolution of this case.”

Whether or not the IACHR will expedite a ruling remains to be seen. When asked when a ruling might be issued, Macaulay said it would take some time.

“That I can’t tell you,” she said. “Because it goes through a process where all the other commissioners have to consider with us, not just the three of us. The others have to weigh in, as well.”

“We have a procedural backlog or procedural delay because of the number of cases we have versus the resources that we have,” said Abi-Mershed. “It could be a while. It could be multiple years, but I can’t say.”

Additionally, Mills, who referred to what occurred to the JLAs as a “mockery” of international law, requested for a favorable ruling so as to send a message to the current administration.

“Now, as of today, the USA’s own courts have been able to forestall the executive directives concerning immigration of the current administration, but they are resourceful people, and they seem to think that what they are doing is just fine,” said Mills. “And in the name of humanity and the petitioners, I beg the court to add its voice as swiftly as possible to those that urge the United States of America, with respect, to respect the principles of international law and use this case, which so closely relates to what’s going on today. As you learned in this case, the United States of America again is using its power to strip people of their rights of citizenship for its own purposes.”

Shibayama was the first to testify. He shared about how his grandparents had been one of the first to be taken away from Peru and shipped to the Seagoville Department of Justice camp in Texas and were used in a hostage exchange between the U.S. and Japan.

As word got around that the authorities were rounding up heads of the household of Japanese Peruvian families, Shibayama’s father went into hiding.

“Not finding my father, they took my mother and put her into jail,” said Shibayama. “My sister was 11 at that time, and she went with her because she didn’t want her mother to go by herself. She told me that they were put in a cell with criminals and prostitutes, so they were so afraid, so they hugged each other and cried all night.”

Shibayama’s father eventually turned himself in in order to free his wife and daughter. From there, Shibayama’s parents and six children were transported at gunpoint to a ship and sent to the U.S. During the journey, all passports and legal documents were confiscated.

The family was confined at the Department of Justice camp in Crystal City, Texas. From that point, Shibayama’s education would be spotty.

Once the war was over, the Shibayamas, like many other JLAs, were sent to Seabrook Farms in New Jersey as hired hands.

At Seabrook Farms, Shibayama joined his father and sister to help support the family since his father, alone, could not support them. There was a 30 percent tax on paychecks issued to JLA workers since they were categorized as “illegal aliens.”

During the peak season, the Shibayamas worked 12 hours a day, seven days a week, which gave Shibayama no time to attend school.

Ironically, Shibayama, despite his illegal alien status, was drafted by the U.S. government during the Korean War. While in the service, his section leader applied, on Shibayama’s behalf, for his U.S. citizenship, but Shibayama was denied, based on the ruling that he had entered the U.S. “illegally.”

“The government brought us here by gunpoint, so how can they classify us as illegal aliens?” said Shibayama.

Shibayama’s daughter, Bekki, became emotional during her testimony as she recounted her recollection of her grandfather.

“To this day, my family and I believe that the U.S. government killed my grandfather’s spirit,” said Bekki. “After his capitulation and from then on, he was never the same man again. Gradually, he became silently entombed in a world of isolation. I only knew him as a shell of his original self. And I just wished that I had shown him more love when I had had the chance.”

Decades later, Bekki said they learned that her great-grandparents, who had been used in a hostage exchange, had never told the family in Japan why they had returned.

“They (great-grandparents) were part of the second hostage exchange, so they were forcibly sent back to Japan,” she said. “I know that they went back to live with their son. And since it was in Japan, it was a war-torn country. The son was struggling to support his family, so it was a burden to have his parents come back. We didn’t find out until later that our great-grandparents didn’t even tell their son what had happened. There was so much shame that they wouldn’t even tell them, so the son wondered why, why did they have to come back because it put an additional burden on his family.”

Grace Shimizu, the delegation’s coordinator, asked that the commissioners take a global perspective when considering redress for the Shibayama brothers and the other JLAs.

“I just want to implore you to really look at what are the remedies available,” Shimizu said. “Don’t limit yourself to what the Japanese Americans got from the U.S. government — the Civil Liberties Act, the Mochizuki settlement. Look to the world scene for all the types of human rights violations that have occurred and the types of justice that people have gotten. If any of those apply to the (Shibayama) brothers, they must be applied here.

“What we don’t want is for the standard of redress to be lowered. We don’t want what we went through to be diminished such that our humanity is valued less than others around the world.”

The Civil Liberties Act of 1988 issued an apology from the U.S. government and compensation of $20,000 to Japanese Americans imprisoned in U.S. concentration camps during the war, while the Mochizuki settlement offered an apology and a mere $5,000 to eligible Japanese Latin Americans.

The Asian American Legal Defense and Education Fund also submitted a letter of support to the IACHR. In the letter, AALDEF noted that the JLAs deserved the following:

The delegation also added a request to set up an educational fund. Shibayama’s daughter pointed out that when she was growing up, she knew so little about their family’s wartime experiences.

To follow updates to this story, visit the Campaign for Justice: Redress NOW for Japanese Latin Americans! Facebook page. 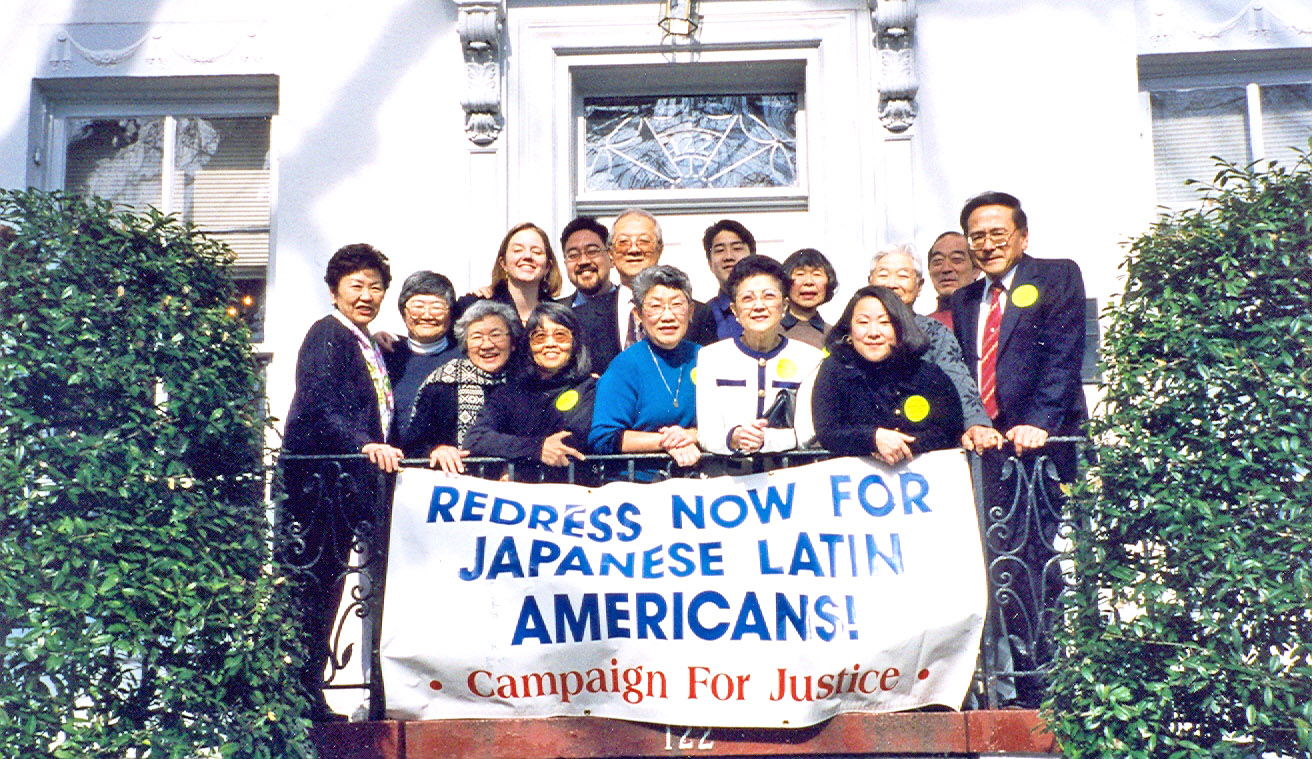 Campaign for Justice in Washington, D.C., circa 1997. (Photo: Courtesy of Betty Shibayama)