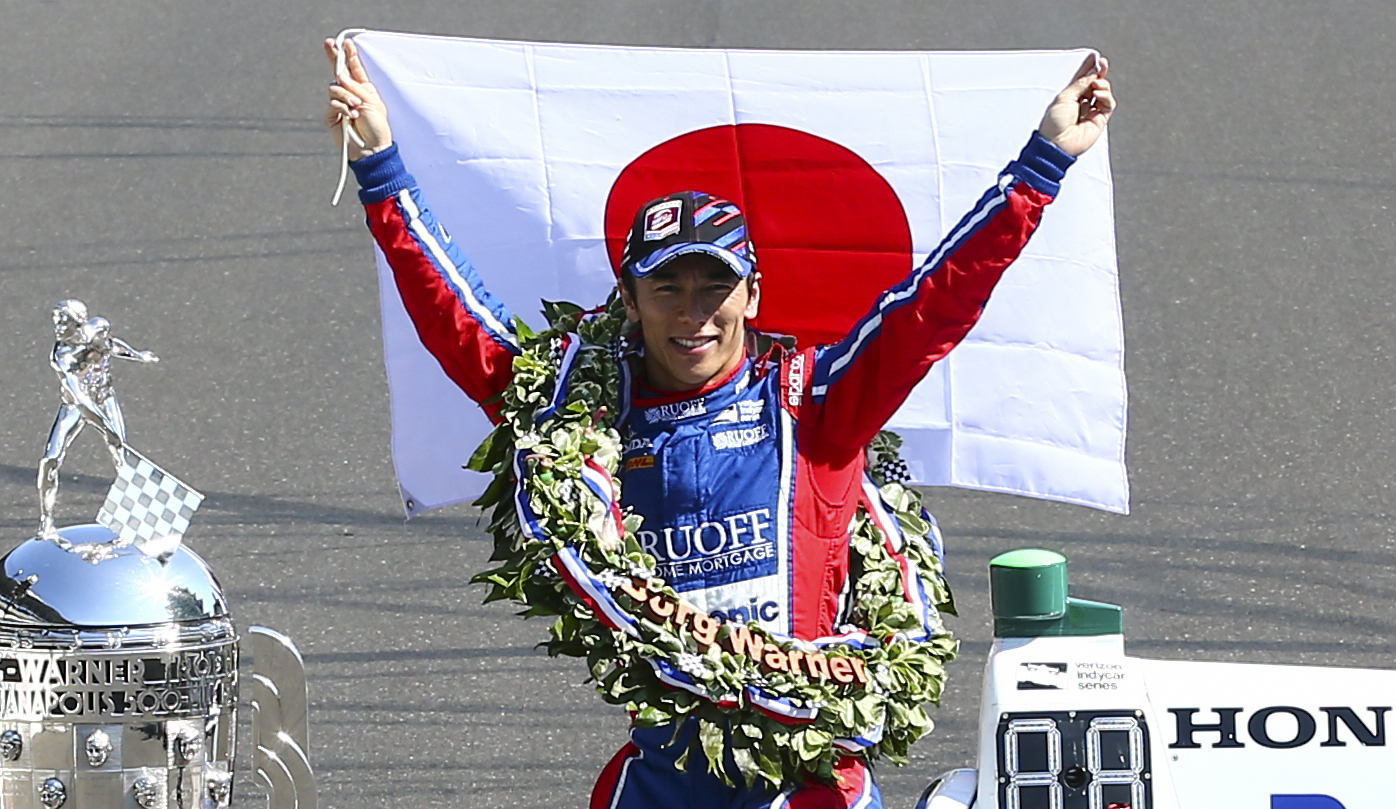 One might say that the Japanese equivalent to the proverb “If at first you don’t succeed, try, try again” is nanakorobi yaoki, which translates to “Fall down seven times, get up eight.”

If so, then that saying definitely applies to Japan’s Takuma Sato, who raced but never won in seven attempts to win the Indianapolis 500 before finally finishing first with his eighth attempt in May. To do that, he needed to keep at bay Brazilian Helio Castroneves, himself a three-time Indy 500 winner.

That victory marked Sato, 40, as the first person of Asian heritage to win the iconic American automobile race, which takes place annually during Memorial Day weekend.

With that win, the world is now seeing the fruit borne of Japan’s motor sports culture.

“It was just a matter of time,” Sato told the Pacific Citizen. “I’m sure there are many more to come for Japan, as well the rest of Asia.”

Not only did it take eight attempts to finally win, it was, according to Sato, a personal dream that was more than two decades in the making.

Sato’s victory in American professional auto racing might be compared to pitcher Hideo Nomo’s impact in Major League Baseball more than 20 years ago, which opened the door to other pro ball players from Japan and elsewhere in Asia, such as Ichiro Suzuki and Hideki Matsui, who competed at that sport’s highest levels and revealed to the world the strength of Japan’s baseball culture.

Similarly, Sato’s Indy 500 win was, for Japan, a validation of many decades of motor sports culture and fascination that predates the animated cartoon “Maha Go Go Go” and its fictional race-car driver Gō Mifune, better know here as Speedy of “Speed Racer.”

“Maybe we didn’t have as long a history as in the United States as well as perhaps in Europe,” Sato said, adding, “but we have a good kind of culture using motorcycles. If you look at professional motorcycle riders, there are quite a few [Japanese] international world championship riders.”

As a teen, Sato was a champion-caliber bicycle racer, and he didn’t actively pursue his dream of becoming a professional race-car driver until he enrolled in the world-famous Suzuka Circuit Racing School right before its cutoff age of 20.

“I started auto racing very late, but that was because I didn’t know how to do it,” Sato said, noting how some parents nowadays start their children’s involvement in sports earlier and earlier in their young lives. “It was very late, but not too late.”

Getting in at Suzuka — and earning a scholarship to learn how to become a race-car driver — would change Sato’s life.

“It took another 20 years, but I was dreaming all the way through my career to win the 500,” he said. “Basically, if you’re trying all the time and believe in yourself, eventually, you’ll reach your dreams.”

Asked whether finally achieving the dream of winning the Indy 500 was what he expected, “yes and no” was Sato’s answer.

“The Indy 500 is something very exceptional, so it’s an incredible feeling, an incredible experience,” Sato said. “What I really didn’t expect was — it’s just starting to settle down — but every month, you have some kind of event, like we did a sculpture for the [unveiling of] the Borg-Warner trophy (the trophy given to the winner of the Indianapolis 500) a couple of days ago. Every month we have something, and it’s like becoming bigger and bigger and bigger.”

Another one of those events that came with winning was being honored in August with Japan’s Prime Minister Award, presented by Prime Minister Shinzo Abe. It’s an honor bestowed to individuals or organizations that have made societal contributions to Japan. 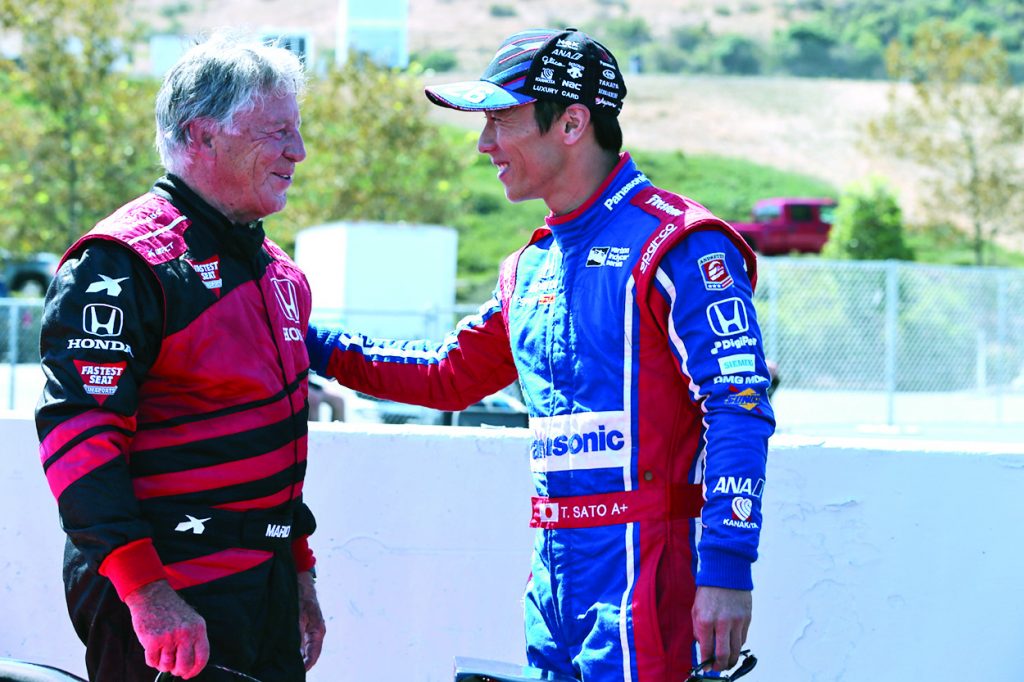 According to Sato, who drove for Andretti Autosport when he won the Indianapolis 500, the racing season is from March to the end of September, and he spends most of that period in the U.S.

“Every week, every two weeks, there is some racing activity,” he said. His U.S. home base is in Indianapolis, Ind., while his wife, Chiharu, stays with their two young children in Japan. Off-season, he spends October through February in Japan, and his family comes to the states to spend time with him during spring and summer break. For now, he says, that system works.

The Life of a Racer

Sato nearly won the Indianapolis 500 in 2012 during this third attempt, but crashed when attempting to pass Dario Franchitti, who won that year’s contest. Some things are beyond one’s control, Sato said, and that it’s up to you and your team to prepare for the things you can control — a good-quality, competitive pit crew, your car, etc.

“This year, I had a perfect environment — fast cars, a great feeling and experience,” he said. “Your preparation has to be the best. Everything has to be perfect. And, on top of that, you have to be a little bit lucky.”

Sato should know after competing in eight Indy 500 races, seven of which came up empty for him.

Sato noted, however, that last year, his former teammate, Alexander Rossi, won the Indy 500 on his first attempt. Sometimes it happens, he says, but in most cases, you do need to do it a few times.

In the Driver’s Seat

As for what it’s like to be in the race, Sato said, “The first 100 miles and the last 100 miles are completely different animals. Among the race drivers, obviously we respect each other, but we don’t race too hard at the very beginning. But in the end, the last 30 laps, especially, you’d be amazed how people get competitive and very aggressive.”

Asked what he thought were the biggest differences between actually driving a race car and what a fan watching from the stands might not know about, Sato said it was probably the physical toll it takes on the body and the actual sensation of speed.

“We lose about five pounds of body weight after every single race,” Sato said. “The heartbeat never drops below 170 per minute during the entire race. The workout is intense, even though it looks like we’re just sitting and driving.”

He added that the high speeds increase the G-force or equivalent amount of gravity on the body, which at high speeds can equate to five times one’s bodyweight.

“Insane” was the word he used for the sensation of speed.

“When you have a problem, and you have to park your car on the side of the track, and you’re watching the cars go around the corners, it’s just unbelievable, just staggering,” he said.

To keep physically fit for the demands of racing, Sato uses an activity from his teen years — bicycling.

“I use a bicycle for some part of my training because you can go out for two or three hours and not get bored. And, there’s something mechanical involved — the wheels, the gears, the brakes that you can adjust — that sort of feeling is very fun,” he said, noting that bicycling also helps with his endurance.

Race to the Bottom

As gratifying as the win was for Sato, part of his victory was marred by the reaction from a veteran Denver Post sports writer. After Sato’s win, Terry Frei tweeted: “Nothing specifically personal, but I am very uncomfortable with a Japanese driver winning the Indianapolis 500 during Memorial Day weekend.” Frei would delete the tweet, but not before it was seen by many, including a former Denver Post colleague.

It struck an odd note, to say the least, with Frei’s former co-worker, Gil Asakawa, who is also the chair of the Pacific Citizen’s Editorial Board and frequent commentary contributor. On his own blog, Asakawa pulled no punches, writing: “What’s his logic for this now-deleted tweet? What does he feel about Italians, or French drivers, or Latino or African-Americans behind the wheel? If his objection is because it’s Memorial Day weekend, would he feel the same about a German (or Italian) driver winning the race? And does he have ANY IDEA about the 100th Battalion/442nd Regimental Combat Team, which fought — and died — during WWII and remains to this day the most highly decorated unit in the history of the United States military????? What was he thinking?”

Frei used Twitter again to apologize to Sato and his employer — but it was too late. He was out of a job — almost immediately, the Denver Post fired Frei.

It was a move that Asakawa disagreed with because a teachable moment was now a lost opportunity.

“I thought the Post should punish him, but also keep him on staff,” Asakawa said. “But I wanted them to send him to Japan for a week to cover the Hiroshima bombing anniversary in August and require him to file a feature story each day, profiling Japanese people and culture.”

Regarding Frei’s firing, Sato said, “That was very unfortunate that he lost his job. I wish he was coming back professionally as early as possible because I imagine he’s a good writer. He had his feeling, and he tweeted — and it backfired.”

Sato also added: “I feel proud to be from Japan and competing in an international race and winning. So, some people might feel uncomfortable, but, really, nowadays in sports, you can go to the Olympic Games or the World Cup and your nationality shouldn’t restrict you from any competition.

For Sato, it is now the off-season, and he is back in Japan to spend time with his family and get a well-deserved respite from the hubbub that came with winning a high-profile car race.

In a few months, however, another Indy 500 looms, and Sato has now rejoined Rahal Letterman Lanigan Racing, where he will be teammates with Graham Rahal. Having finally achieved his dream of winning, maybe if preparation and luck realign, he can do it again.

Speaking from experience, Sato said, “If you try all the time and believe in yourself and believe the people who support you and continue your challenge, eventually, you’ll reach your dreams.”