Protesters demand for the release of people detained by ICE at the Yuba County Jail.

In spite of threats by local police to issue citations for a rarely used “honking” violation, 50 people in more than 40 cars demanded for the release of individuals detained by ICE at the Yuba County Jail in Marysville, Calif., on April 14. Following a car that had a tsuru on top of it, protesters honked and displayed messages that included “#FreeThemAllYuba,” “Detention Is Deadly,” “Cancel the Contract” and “End Family Detention” for nearly an hour. 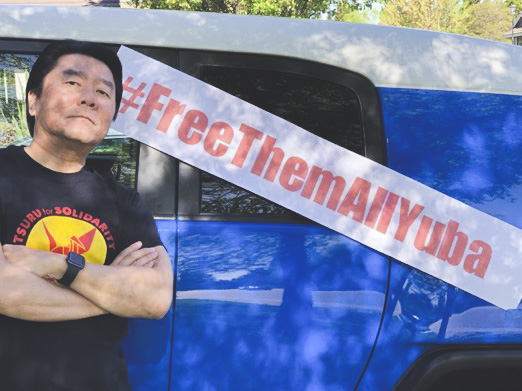 Most of the 30-plus organizations sponsoring the car rally worked together in January for the Tsuru for Solidarity Oshogatsu Protest to Close the Camps at the Yuba Ice Detention Center. Japanese American groups with the Bay Area and Sacramento hubs of Tsuru for Solidarity, Japanese Americans for Justice, Florin JACL and San Jose Nikkei Resisters led the charge; the rally was attended by nearly 300 people.

Since then, ICE detention centers have continued to expand because of current anti-immigration policies. Not helping matters is the current COVID-19 pandemic, which has affected everyone’s life and turned things upside down. Many events have been canceled or postponed to keep people safe. Yet, asylum seekers and other immigrants remain in detention facilities that are ripe for a spread of contagious diseases.

Nationwide there have already been 10 reported deaths of persons in immigration custody in the past six months alone, and at least 160 immigration officers have tested positive for COVID-19.

Having had to postpone the National Pilgrimage to Close the Camps that was set for Washington, D.C., in June, due to the coronavirus pandemic, Tsuru for Solidarity has quickly pivoted to respond to the danger of COVID-19 spreading in confinement centers, much like what Japanese Americans were subjected to during World War II when they were forcibly incarcerated in American concentration camps and exposed to communicable diseases.

“The last place you want to be in a global pandemic is a U.S. concentration camp,” said Satsuki Ina, co-founder of Tsuru for Solidarity and a WWII camp survivor. “When we were forced to live in confinement, communal latrines, mess halls and high-density living made it impossible to avoid repeated epidemics of influenza and other life-threatening communicable diseases. 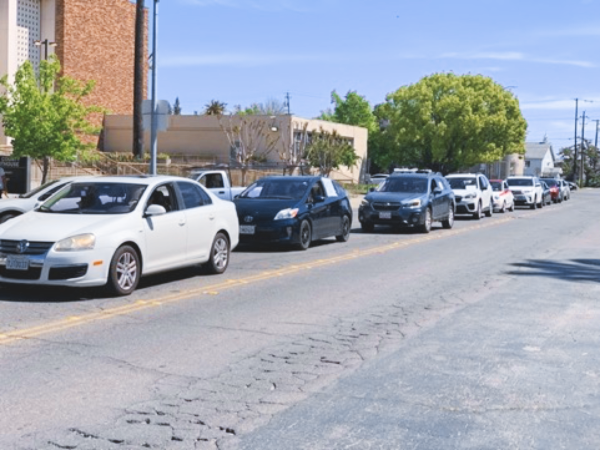 More than 40 cars participated in the rally to free detained individuals by ICE at the Yuba County Jail. (Photos: Joshua Kaizuka)

“Today’s immigrant detainees are unable to practice social distancing and denied masks and gloves, easy access to running water and soap. Like incarcerated Japanese Americans during WWII, these immigrant detainees are not being held for committing crimes, they are not a threat to national security,” Ina continued. “They are waiting for their asylum hearing. It is unjust to keep them in confinement at all, but to keep them confined during a pandemic is cruel and unusual punishment.”

According to Kim Miyoshi, a co-organizer of the coalition, “The Japanese American community’s experience with the impact of infectious disease while incarcerated prompted Japanese Americans for Justice to join the Coalition to Free Everyone in ICE Detention in Yuba County,” and “demand the release of ICE detainees as a matter of human rights amongst a global pandemic.”

Miyoshi added that “during World War II, many Japanese Americans who were incarcerated in concentration camps died from preventable communicable diseases like tuberculosis and influenza.”

Dr. Ian Kim with Doctors for Camp Closure Sacramento and a co-organizer, explained that “social distancing is impossible in jails, prisons and detention centers like this one.” In addition, he said that “COVID-19 now presents a crisis of human rights and public health.”

Kim added that it “is an inalterably dangerous place for the people detained and for the people who work there and their families — that place must be cleared out.”

A Yuba County local, Carlos Wadkins with Estamos Unidos, said he “became involved in organizing this car rally because I think allowing ICE to detain people in our county jail is always unjust, but during a pandemic, it’s a disaster waiting to happen. The rally turned out great because it brought a lot of attention toward what’s happening, but we need to keep going. Yuba County Jail is far from equipped to handle the coronavirus, and until something changes, they’re sitting on a ticking time bomb.”

“It is undisputed that the housing units, meal area and temperature checks do not comply with social distancing orders. None of the detained people are provided masks, and most of the jail staff do not wear masks,” wrote Judge Maxine Chesney on April 8 when she ordered the release of two people in Yuba ICE detention due to underlying medical conditions. However, it left the rest of the nearly 150 people detained still in danger.

Explaining why the Jewish community helped organize the rally, Greg Brucker with Jewish Action NorCal explained that “as Jews, we have seen this before. We have lived and died through this before” and “the most important thing to do right now is to raise the noise level, get in the way and push back to shed light on the great darkness that surrounds, as love and light will lead us down the right path.”

To practice social distancing in a COVID-19 safe manner, only those fairly local to Marysville attended the car rally in person. For those living too far away or unable to attend, social media activities were included.

People participating from home were encouraged to send emails to the board of supervisors, Yuba County Sheriff and the ICE director, as well as participate in a photo challenge with hashtags #FreeThemAllYuba #CutTheIceContract #PeopleOverProfits on Facebook, Twitter and Instagram.

For those in attendance at the rally, everyone remained in their cars. Local police showed an intimidating show of force, following along and parked in their patrol cars.

Wadkins was pulled over for honking, but he was not given a ticket. Instead, he was told to tell everyone to stop honking — to no avail. No tickets were issued, despite protesters not adhering to the warnings. 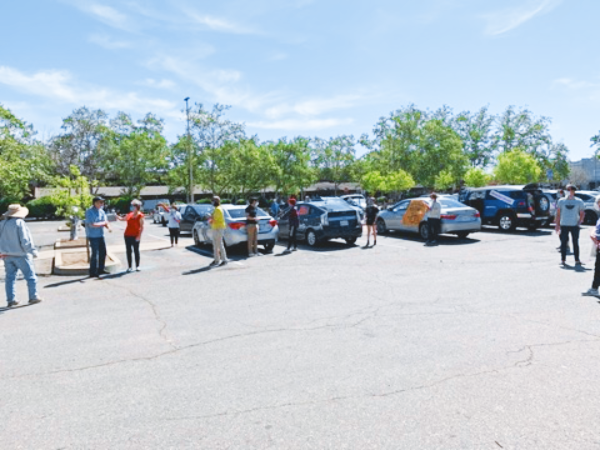 Those gathered for the rally followed social-distancing protocols to help prevent the spread of COVID-19. (Photos: Joshua Kaizuka)

The rally not only had a great turnout of cars but also had an amazing turnout online. Videos and livestreams from the event had more than 15,000 views, posts reached nearly 25,000 people and many more have been energized to continue advocating for those who do not have a voice. Pre-event media coverage by the local press also had some residents of Yuba county come and support the demand to free the ICE detainees.