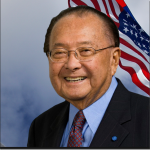 WASHINGTON, D.C. — A $5,000 memorial scholarship honoring the late Sen. Daniel K. Inouye’s iconic career of public service, both in the military and government, has been established by the Japanese American Veterans Assn.

The scholarship, to be awarded this summer, will go to the applicant who, in the judgment of the awards committee, has been shown in his or her educational planning a career path toward public service.

The special annual scholarship, one that will epitomize the honoree’s life, will be funded from JAVA’s investment income. The initiative won ready approval from JAVA’s executive council and from the Inouye Institute, which oversees the senator’s estate concerns.

The creation of the Inouye scholarship was one of several changes that JAVA has made for 2014 to its scholarship program. It was the initiative of Ray Murakami, outgoing chair of the organization’s scholarship committee. Murakami is being succeeded by Wade Ishimoto, who also serves as JAVA vp.

Unlike many of the JAVA memorial scholarships that have been established by the families of deceased members and which are now administered to benefit high school graduates, the competition for the Inouye award will be open exclusively to advance undergraduate, graduate and professional school students who are engaged in an academic program that will lead to public service. Each applicant for the Inouye scholarship will be required to submit a 500-word essay detailing his or her career goal and the plan to achieve it.

Scholarship committee officials have announced that, as in the past, applicants for any of the JAVA scholarships who are descendants and who can trace their ancestry directly to those who served in the 100th Battalion, 442nd RCT and MIS nation’s armed forces will continue to be eligible to apply.

However, for the first time, individuals who are collaterally related, e.g., one who has a nephew/niece relationship, will also be eligible.

Other additional categories of eligibility will be continued. In the case only of the Inouye scholarship, the committee has also decided to invite applicants from any past and present members of Hawaii’s 100th Battalion and 442nd Infantry.

In addition, JAVA hopes to attract applicants who are in college ROTC programs.

Qualified undergraduates are likely to have interest in another change in the JAFA scholarship offering.

With the approval of Connie Ishio, widow of Col. Phil Ishio, USAR, a decision has been made to establish a Founders Scholarship, in the amount of $3,000, in the names of Phil and Douglas Ishio, father and son, jointly. Previously, separate scholarships had been offered in their names. Phil Ishio was the founder of JAVA. The Ishio scholarship will be offered for the first time exclusively to college undergraduates who have completed at least two years of studies.

An additional scholarship has been established through the efforts of Judge Raymond Uno of Salt Lake City, Utah. Uno has arranged to provide a $15,000 gift to JAVA to establish a scholarship in the memory of CWO Mitsugi Kasai, a career Army officer who, in retirement, had actively worked to exhibit memorabilia of Japanese American World War II history in the Salt Lake area.

The final date to submit an application is Saturday, May 31.

The names of the awardees of the Inouye, Ishio and memorial scholarship awards will be announced at the annual JAVA scholarship luncheon, which will be held in July.

Complete details, rules and application forms will be posted on the JAVA website at www.javadc.org.